Media: the Israeli government is concerned about the fate of “Russian pensions” of repatriates from the Russian Federation 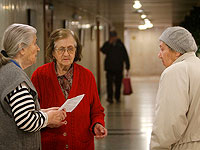 This week, a special meeting of the ministers of finance, foreign affairs and aliyah took place, dedicated to the fate of the “Russian pensions” of Israelis who repatriated from Russia. According to the Ynet website, Israel fears that Russia will stop payments under the pretext of being unable to transfer money abroad due to the sanctions imposed against it.

The publication writes that about 57 thousand people live in Israel, who are entitled to pension contributions from Russia. They are divided into two groups: about 41,000 Israelis receive pensions directly from Moscow once a quarter, and about 17,000 more through the National Insurance Institute under an agreement signed in 2016 between Benjamin Netanyahu, who at that time served as prime minister. minister, and Russian President Vladimir Putin.

Last month, Russia gave notice that it would stop transferring money to pensioners living abroad because of the sanctions. In order to continue receiving the money due, the pensioner needs to open an account in a Russian bank. Thus, most of the 41,000 pensioners living in Israel and receiving pensions directly from Moscow will not be able to receive this money in the near future.

The publication writes that the fate of the pensions of those who receive them through the National Insurance Institute is also in question. In April, they were transferred money for January-March, in July – there should have been a payment for the second quarter. But it is not yet known whether Moscow will transfer pension money to Israel.

According to the Ynet website, the National Insurance Institute is also concerned about the situation, which has already turned to the Israeli Ministry of Finance for clarification, but there is no ready answer.

The publication writes that at a ministerial meeting held this week, it was discussed what steps could be taken by the Israeli government if Moscow does not transfer the money. Ynet writes that in parallel with this, negotiations are underway between Jerusalem and Moscow regarding these pensions.

Ynet also cites a response from the National Insurance Institute, which says that in case of non-payment of “Russian pensions” and a significant deterioration in their financial situation, older people can contact Bituach Leumi to check if they are entitled to additional assistance.