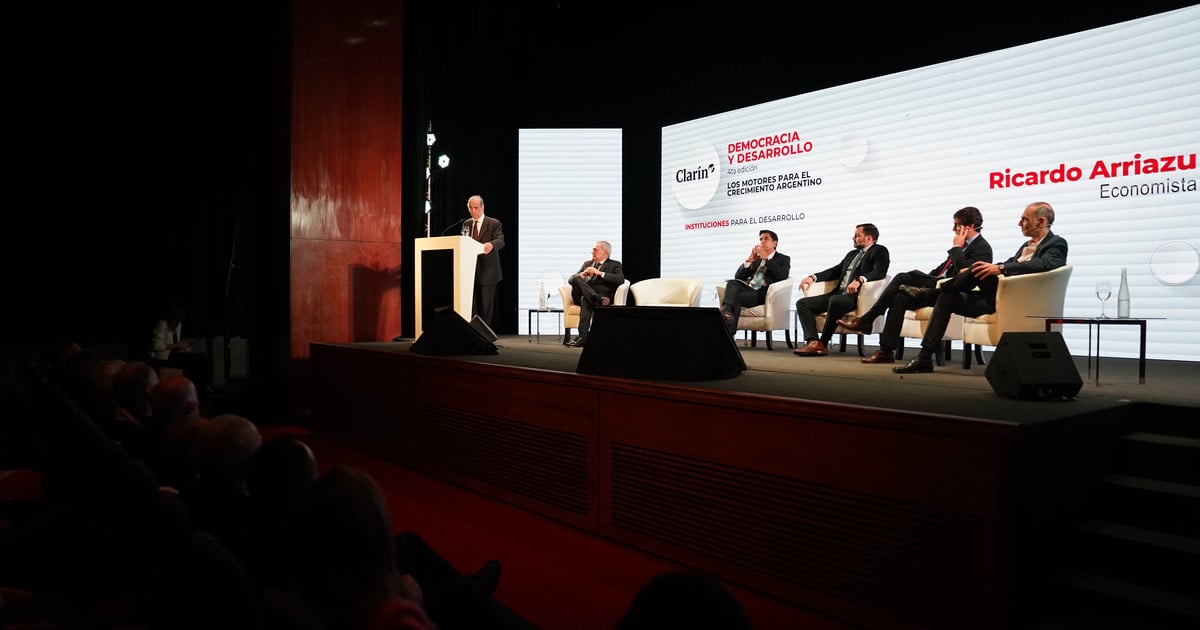 With inflation on the way to 70% a year, economists called by Clarion to participate in the fourth edition of the Democracy and Development cycle coincided in the importance of lowering the deficit and putting a stop to price escalation.

Under the slogan “The engines for Argentine growth”, Ricardo Arriazu, Carlos Melconian, Emmanuel Alvarez Agis and Hernán Lacunza spoke in the Malba auditorium before more than 300 people among which were officials, political leaders, businessmen and financiers.

Ricardo Arriazu’s exhibition opened the cycle. He pointed out that Argentine history can be divided into two batches. On the one hand, the first 50 years in which the country was a world supplier in the style of what is now China. On the other are the last hundred years, characterized by “a decline with all kinds of government and all kinds of politics”.

“It is false that Argentina has a problem of structural lack of foreign currency. The problem is that the public sector spends more. We have invented the philosopher’s stone: we want to be rich without working,” Arriazu said.

The second speaker was the former president of Banco Nación, Carlos Melconian. The economist warned about the difficulties that he can generate in the face of 2023 “give too many incentives and acquired rights in plans and issuance” to different sectors.

For Melconian, it is key to “stabilize the framework. We must prepare a reform of the public sector. A dysregulatory shock is urgent. You have to release the initiative to the private sector, which is the one that creates wealth,” she said. “When public spending is unfinanceable, one is doomed. We have returned to inflation of 60 or 70% per year“.

“Probably in 2023 a coalition will win and it will be a challenge. We have to close the agreements before the election. They are not consensus, they are agreements,” Melconian said.

The economist Emmanuel Álvarez Agis reflected on the populist regimes in the country: “We are all populists, but always with someone else’s money”he stated during his presentation.

In addition, he slipped a criticism regarding energy subsidies during the last government of Cristina Kirchner, in which he served as Deputy Minister of Economy.

“I take responsibility for having participated in a government that left subsidies at 3.5 GDP points,” said the head of the PXQ consulting firm.

“The problem of inflation in Argentina is going to take many years to solve and more than one mandate. The last time I said it on the campaign trail, they asked me to keep my mouth shut,” he said. And he remarked: “there are no magic solutions. The objective of monetary policy must be to lower inflation. An interest rate that is above inflation is a basic consensus for the peso to return to being a savings currency in future decades.”

The last exhibitor was Hernán Lacunza. “The stagnation is not for a decade, but for at least 50 years. Argentina grew half a point per year in the last 50 years, while Chile grew 2.5 points. We no longer missed the train of the developed countries but of the developing countries,” said Mauricio Macri’s former Minister of Economy.

“We demand populism. We are addicted to deficit. For the lower income sectors, planes. For the middle income rate subsidies. And for those with high incomes, subsidized credits. The policy adapts to those demands. Sure, we want you to vote for us“, he opined.

In this sense, Lacunza proposed that the way out of the stalemate has to be generated from a government coalition that is “pro-export and pro-employment”. “The macro rules, we learned from the last government. We can do the micro well. Now, if the dollar is a kite, everything is worn,” she warned.

“We have tried everything in these 45 years: Austral plan, Convertibility, fixed exchange rate, inflation goals. Nothing. We never intend lasting fiscal balance for many years. I have nothing against public spending. What you cannot do is spend 40 and collect 30 because you are missing 10″, closed Lacunza during his presentation. “If we don’t fix spending, anything we do with money won’t work.”