Magnetic confinement fusion, the energy that mimics the stars 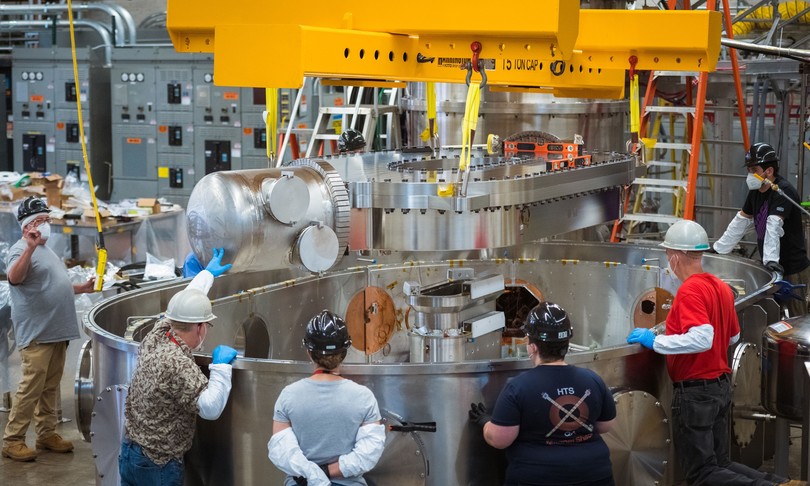 AGI – Eni’s announcement of the world’s first test of the magnet with superconducting technology Hts, successfully conducted together with Cfs (a spin-out company of the Massachusetts Institute of Technology of which Eni is the largest shareholder), focuses on a safe, sustainable and inexhaustible source of energy that will reproduce the principles underlying the generation of solar energy and therefore represents a turning point in the path of decarbonization. Here is in detail what it is.

During the test, the toroidal magnet, weighing about 10 tons, cooled with liquid helium to a temperature of about – 253.15 ° C (20 degrees above absolute zero) was energized with an electric current of increasing intensity, up to 40,000 Amper, for fixed periods of time and in different operating conditions, developing a very high intensity magnetic field, up to 20 tesla (T). Such magnetic fields would not have been obtained with the use of traditional materials such as copper or Lts superconductors (Low Temperature Superconductors) which would have been damaged by the heat generated. The result was achieved thanks to the properties of the superconductors Hts (Rebco – Rare Earth Barium Copper Oxide) that make up the active part of the magnet, which are able to achieve much higher performances in terms of associated magnetic field.

The test demonstrated the possibility of maintaining the magnet in the superconducting regime with a high stability of all the fundamental parameters for its use in a future demonstration plant The test also generated a huge amount of data that will be analyzed deepened over the next few months. Hts technology is based on the discoveries that led Johannes Georg Bednorz and Karl Alexander Müller to the Nobel Prize in Physics in 1987, but only recently has the commercial availability of Hts tapes led to their use in super magnets.

In the process of nuclear fission the bonds between the particles of the fuel nuclei, usually consisting of uranium isotopes (or plutonium, in the case of the so-called “breeder” reactors) are broken by the neutrons emitted in the spontaneous nuclear decay and regulated to trigger a controlled chain reaction to the in order to release energy, which is subsequently used for the generation of steam and the production of electricity through turbines and alternators.

During the fusion the opposite procedure takes place: once the appropriate conditions have been created, nuclei of light elements (such as tritium and deuterium, hydrogen isotopes) reach a state of matter – plasma – in which they can overcome the repulsive forces and merge into a nucleus. of helium, releasing more energy per unit of mass than fission. This is the same process underlying the generation of energy in the Sun and the stars. All this can happen by virtue of technologies that guarantee an intrinsically safe process, capable of spontaneously extinguishing itself when the conditions that support it are removed, including the presence of intense magnetic fields for the confinement of the plasma inside the plant.

Magnetic confinement fusion promises a real revolution in the energy field because, once developed on an industrial level, it would make it possible to have a source of clean, safe and practically inexhaustible energy available. With a view to profound innovation, which in the medium term can lead to a safe, clean form of energy, with zero CO2 emissions and very low fuel consumption, therefore perfectly consistent with the objectives of transforming the energy mix and sustainability. that characterize the energy transition, Eni has long started a program that includes commitments on several fronts:

Stake in Cfs (Eni has been a shareholder of Cfs since 2018);

Collaboration with a scientific program directly with MIT, called Lift (Laboratory for Innovation in Fusion Technology) aimed at accelerating the identification of solutions in terms of materials, superconducting technologies, physics and plasma control);

Participation in the Dtt (Divertor Tokamak Test facility) project launched by Enea, for the engineering and construction of a Tokamak machine of considerable importance dedicated to the experimentation of components that will have to manage the large quantities of heat that develop inside the melting chamber. The industrial know-how and the management and development skills of large projects, which characterize Eni’s innovation processes, combined with the excellence of Enea’s scientific research, will be the key to success for the realization of this very important initiative and associated infrastructure, based primarily on Italian skills and technologies. The project, currently being implemented by Enea and Eni at the Frascati Research Center, once again places Italy at the international forefront in the field of research to obtain clean, sustainable and safe energy;

Collaborations with other Italian excellences, which have long been part of the Eni network, such as the CNR and the main universities involved in this field, which are also implemented in the creation of the joint Eni-Cnr Research Center in Gela which has as its main objective to develop local skills through the promotion of PhDs and grant activation for the modeling of physical phenomena and engineering design elements in the field of fusion reactors.

The development of magnetic confinement fusion is a world-class challenge that involves many international excellences in the scientific-technological and industrial fields, where everyone is putting their experience and skills at the service of a revolutionary technology. As for Eni, in addition to collaborating with important research institutions, the company has put the HPC5 supercomputer is available to researchers which, with its great computing power, allows to use very complex mathematical models to describe plasma physics and simulate its behavior.

When the merger has become technologically mature enough to be used on an industrial level, a new scenario will open up in which, finally, a extended supply of clean, safe and sustainable energy. Power plants powered by fusion reactors will be able to meet the growing energy demand of large production and urban settlements, while maintaining high sustainability. Smaller plants, integrated with renewable sources, will at the same time facilitate the energy supply of small communities and off-grid realities.

The energy produced by the fusion process is virtually infinite, safe and with zero emissions of greenhouse gases and pollutants. Suffice it to say that one gram of fusion fuel contains the energy equivalent to that of over 60 barrels of oil, without this leading to the release of greenhouse gases. The road to this revolutionary technology is long, but following it means aiming for a sustainable future.