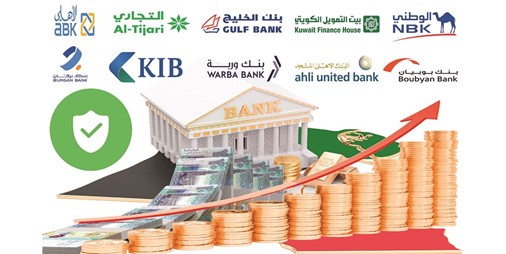 Kuwaiti banks have strong financial safety indicators that support the ability of the banking sector to face any crises or economic challenges, as Kuwaiti banks have a strong asset base that has succeeded in overcoming all the effects and repercussions that resulted from the Corona pandemic crisis, thanks to the precautionary measures and measures taken by the Central Bank of Kuwait over the past years.

The financial statements of the banks during the first quarter of 2022 confirm the strength of the financial safety indicators of the Kuwaiti banking sector, in terms of capital adequacy, liquidity, asset quality and profitability, supported by positive results of financial stress tests, and 10 banks achieved total profits in the first three months of 2022, amounting to 259.457 million. dinars, an increase of 39.47%.

The consolidated assets of Kuwaiti banks made a big leap during the first quarter of this year to reach 99.27 billion dinars, compared to 91.8 billion dinars during the same period last year, an increase of 8.13%. This increase is driven by the positive growth rates of credit facilities balances.

Below we review the top 10 financial soundness indicators owned by Kuwaiti banks:

2 – There is an improvement in the quality of the assets and credit portfolio of the sector, as the ratio of non-performing loans to total loans reached 1.4% at the end of the first quarter of 2022.

4- After the coverage of non-performing loans was at its lowest level at the end of 2010 at 62.3%, there has been a significant development and a noticeable and continuous improvement in the coverage ratio of non-performing loans to the Kuwaiti banking sector, prompted by the conservative regulatory policy of the Central Bank of Kuwait, where this percentage gradually increased to 300.8% At the end of the first quarter of 2022.

6- The banking sector still maintains an acceptable net interest margin (the ratio of net interest income to average interest-earning assets) at the level of 2.4%.

7- The net profit margin (the ratio of net profit to net interest income and non-interest income) remains high at 37.4% compared to 34.6% for the fourth quarter of 2021, which is the highest since the outbreak of the Corona pandemic, and you will benefit later from the decisions to raise interest rates during the months of March and june.

One thought on “Kuwaiti: Banks record the highest net profit margin since Corona”