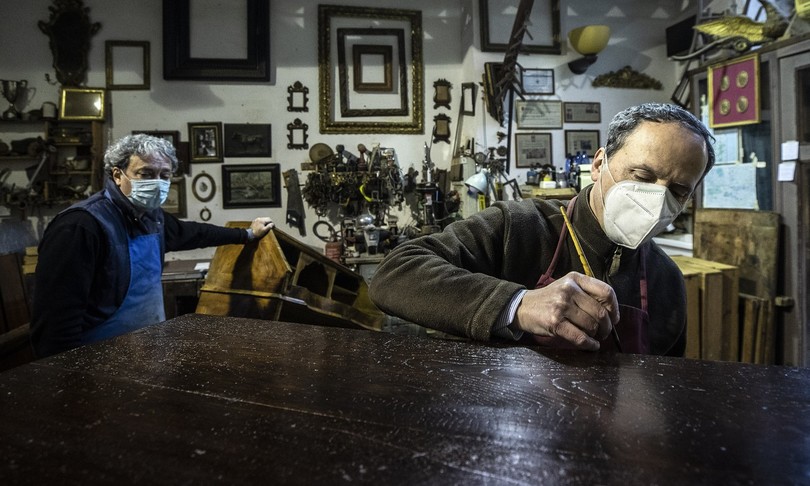 – “Many artisans and as many small entrepreneurs are worried and hope for the announcement effect; that is, that by next 15 October most of the 3.7 million private sector employees who have not yet vaccinated themselves they do. If this does not happen, many companies could find themselves in the position of having to stop their work, because they are unable to make use of the contribution, in particular, of highly specialized technicians and workers who constitute the backbone of these realities “.

This is the alarm raised by the Cgia Studies Office, according to which the companies most at risk could be those in the engineering, construction, textile and footwear sectors, where many jobs are already being discovered because there are no candidates.

“Imagine if then – the CGIA insists – it was necessary to replace technicians and specialized workers, as the decree provides for companies with less than 15 employees: finding some professional figures, in fact, has long been an almost impossible undertaking, especially in some areas of the country in Italy the average number of employees per company is 4 (one owner and 3 employees). The impossibility of replacing even one would mean that the owner of the business does not have a third of the workforce for a certain period of time “.

In short, the reflection continues, “for companies with few or very few employees, the stop for one of them means the stop of production. Of course, to obtain the green certificate there is the possibility that, as an alternative to the vaccine, the employee will periodically swab; but how many will be willing to pay a monthly cost of at least 180 euros per month? “, asks the association of artisans.

In the press release of last September 17 – recalls the CGIA – Unioncamere and Anpal presented the data of the Bulletin of the Excelsior Information System. Among those professions that present the highest percentage of difficulty of availability, that is to say that in 60% of cases they struggle to find, we see many specialized technicians who work in the metalworking sector: welder; milling machine; turner; blacksmith; maintenance and repairer of fixed and mobile machines; in charge of numerical control machines.

Equally affected by this criticality is the home / construction sector. The figures that present great difficulty in finding I am: fixtures fitter; crane operator; tiler; electrician; tinsmith; coatsman; painter. As in the two previous sectors, also the textile / clothing and footwear entrepreneurs who, although more than others have suffered the effects of the pandemic crisis, in about 60% of cases report that they are struggling to find the following professional skills: hemmer; cutter; prototypist; dyer; weaver; finishing officer.

The CGIA asks: “How many employees currently hired with these duties have not yet been vaccinated? Obviously, we do not know, as we do not even know how many of these operators, after next October 15, they will not go to the company because they do not have a pass. However – he notes – the problem arises at least in theory, and how, given that in the middle of this month there were 3.7 million private employees not yet immunized. For many small entrepreneurs, therefore, replacing some of these figures may not be possible. A risk that we must take into account, even if we are convinced that to prevent the epidemiological curve from growing again – thus avoiding new closures and further limitations to mobility – it is essential to widen the number of vaccinated people as much as possible “.

One in four private employees is not vaccinated

According to data released in the middle of this month by the Draghi government, employees in the private sector who have been vaccinated amount to 11 million, while those who have not yet done so are 3.7 million. Therefore, the percentage of unprotected people on the total for the category is 25.1 per cent.

Among the unemployed, however, there are 1.8 million immunized, those who have not yet done so are half a million (21.7 per cent of the unvaccinated). Of the inactive population, 10.8 million have green certification, 2.7 million still lack it (20 percent of the total).

Public employees in possession of the green pass, on the other hand, are 2.9 million, those without just over 400 thousand (rate of non.vaccinated people is 12.1 percent)

Who controls the undeclared workers?

In reiterating that only through the increase in the number of immunized we can defeat the pandemic and firmly hook the economic recovery, the Cgia Studies Office reports another category that the green certificate will not be able to “intercept”: that is, irregular workers. Well, who will check the pass to the hundreds and hundreds of thousands of fake artisans who every day illegally go to the homes of Italians to fix a tap, change the lock, do a styling or replace a roller shutter?

In Italy, remember the artisans from Mestre, the number of illegal workers is just over 3.2 million. They are people who round up their meager income for a few hours or for the whole day by working irregularly: that is to say without paying taxes and social security contributions. Over 1.2 million is in the South, almost 781,000 in the Northwest, almost 724,000 in the Center and just over 525,000 in the Northeast.