“In 10 years, the objectives of governments have never been centered on the accounts” 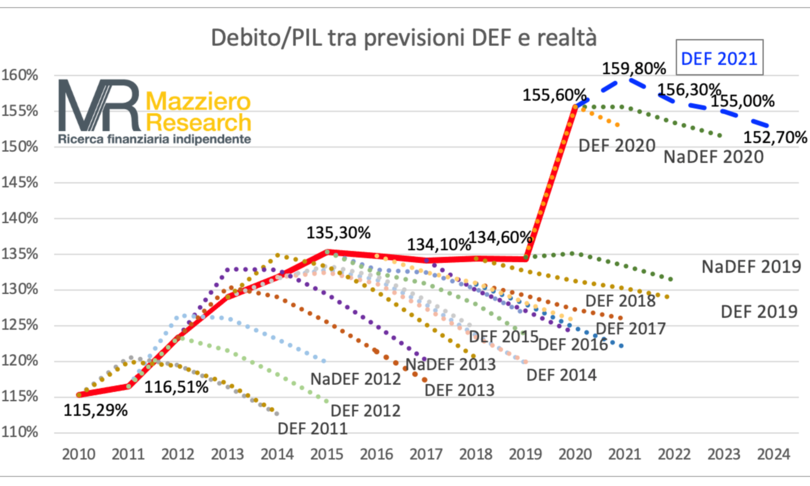 “The successive governments have never hit the predictions but it is also difficult to succeed – explains Mazziero to , a few hours after the launch of the Update to the Def – Today it is difficult for a government to hit the target because there are many variables, in the past the chances were there but it never happened. I have a nice graph that demonstrates this, with the various debt / GDP estimates in the various Defs: there is not one that has been centered “. In particular, he emphasizes,” what we see is that every government, starting from 2010, he always said that he could not decrease the debt in the current year but would do so the following year, and on time the debt has increased “.

According to the analyst, it is therefore necessary to maintain a certain caution in the forecasts, also because the pandemic is further complicating the picture. “In our last observatory we kept the growth estimate at 5.7% for the current year – continues Mazziero – and despite having first brought the forecast above + 5%, compared to the + 4.5% indicated by the government in the Def, we are now lagging behind other research institutes. We maintain an annual estimate of 5.7% because at this time we want to maintain some caution on consumption levels in the fourth quarter. There is a forecast of rising bills that the government is trying to sterilize but will not be able to completely sterilize. This – observes the analyst – together with the possibility that with the colder climate there may be a slight resumption of infections, leads us to be more cautious. It is not excluded that consumer and business confidence weakens a bit during the Christmas period, and therefore in the end it is not actually possible to reach 6% ”.

For Mazziero, “a lot will depend on a series of factors, for example the return to work in the presence of public and private employees”. “There is a whole part of sectors that have not recovered the levels of activity they had before the pandemic, such as services, bars and restaurants that have remained at stake – underlines the financial analyst – we are below the pre. pandemics of about 2.2.5%, if we succeed bridging this gap would have a strong push on GDP which could grow further by about 2% on an annual basis, after 12 months from returning to work”.

The analyst also expresses caution on deficit and debt levels. “The recovery is strong and we will have a good reduction in the debt / GDP ratio which should however remain above 150%. As for the deficit – he continues – it is now difficult to establish a correct estimate. I presume it will be around 10% but there are many unknowns ”.

And on the financial spaces that will open up, the analyst warns: “It is not possible to keep the accelerator pressed for a long time on the support measures, this is not the way to go. I think that certainly some of the resources will have to be used to avoid an increase in taxation. About 3.4 billion will be used to sterilize part of the increase in bills, but it is not convenient to push too much on the deficit. However, we have many funds that come from the advance of the NRP, resources that will go to replenish the debt but which should already indicate some employment, and therefore support the GDP ”.

For 2022, concludes the analyst, “we estimate growth between 4.5% and 5% at the current stage, then we will see how much they will be able to set in motion the investments of the NRP. The investments that can really affect are those in major works because the infrastructure modernization of the country can make GDP grow, but we also know that major works have always had very long gestations. If it is possible to put infrastructure works in motion, growth will be around 5%, otherwise it will stop at 4.5% ”.