The story of the last Alitalia flight 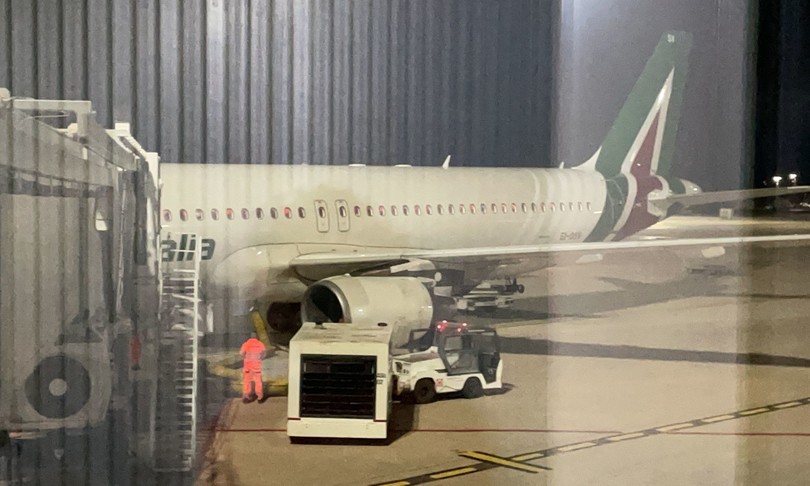 – I thought everything could happen to me in life, except that have the magone for an airline. You pass for a boyfriend, a friend or the farewell to a particularly expensive place … for a plane flight, not at all. But melancholy, you know, is contagious and I too was moved by the atmosphere of this historic date, the last flight of the glorious Alitalia, and also for this short journey – just 65 minutes – from Cagliari to Rome.

A flight that will make history

I sure ‘feel’ that this plane flight it will mark the history of a great company and also of our country, and as a reporter I am happy to experience this moment in first person. I imagine what it means for the cabin crew, first and foremost the commander Andrea Gioia, to be the protagonist of this epilogue: I go to greet him just before departure, I look into the cabin, he is visibly excited. Passengers ask him to sign the boarding pass and the first officer jokes about it: “Come on, you’re becoming famous…”. The fact is that not only from tomorrow, as he explains, “a page of life is closed” but the fact is that “I end up in layoffs as well as all the crew. None of us will fly again, at least not tomorrow “. I greet him, and I go to sit down, I look for the place; I walk down the corridor, pass the flight attendants. But it seems stupid to me to ask them how they feel, because their expression says it all.

The atmosphere on the plane before departure

Here on the plane the passengers chat to each other, and I don’t even need to strike up a button. “Do you know what I regret most of all?”, Comments my neighbor. “The fact that everyone ate on this dish, but the cost of bankruptcy was passed on only to the workers; what a shame”. But the complaints end here: the show must go on, there is too much to do on board in those minutes for the hostess and the steward to let themselves go to outbursts or confidences. In fact, they appear very reserved. Passengers, on the other hand, do not waste time and no one really talks about reading or resting, they rather go wild with selfies: near the porthole, sitting in the seat, there are even those who try to immortalize themselves together with the crew.

There is also a lot of disbelief, it was known over the years that sooner or later, between bailouts and renovations, this could be the epilogue. But there is a bitterness in the mouth, and it remains. The flight is full, of the 180 seats there are those who say that however only 130 were occupied. It is true that in recent days there have been many cancellations and there are those who have managed to take off at the last minute. There are many businessmen, some families, some couples of foreigners: I wonder, will they all be aware that they are living a page of history? The answer is definitely “yes”, everyone is talking about it.

Someone even complains about the Millemiglia program, and I too reflect on the fact that for the first time in many years, I did not accumulate points at check-in … Yes, because I will never fly on an Alitalia flight again. But another passenger in the row in front of mine smiles slyly: “Do you really believe it?”, He asks me. “I am sure that sooner or later it will be reborn”. It makes me think of the famous Phoenix plan of 15 years ago .. Then it was said that Alitalia was just like the phoenix, rising from its ashes. I like to think that it will really be like this, once again, and that our country, which is so loved and also so much mistreated in the end, a national airline, really deserves it. Immersed in my thoughts, and at the same time exchanging reflections with my travel companions, the Airbus 321 begins landing operations.

We fasten our seat belts, put away the folding table and the captain greets us: “We are about to land in Rome Fiumicino, the temperature is 10 degrees centigrade”. His stamp is professional, but we all imagine his state of mind. Then the recorded voice giving the safety instructions and which has the taste of mockery: “We hope to find you again on board our flights”. The gentleman sitting next to me turns to his partner and says: “Really? Did you hear what the stewardess said? ”. He thought they were words just pronounced then shrugs and answers himself: “Ah what a fool, for a moment I thought ….”.

The lights of Fiumicino welcome us, and the last moments of the landing are really movingi: a very long applause of thanks, the one that was usually given once to the pilots to express our gratitude for having brought us safely to our destination. This time, however, it is louder, more heartfelt: “Thank you, thank you very much for everything, and a huge good luck”, says a passenger as she exits the aircraft. Even the stewards, whom I always remember so professional and almost impassive, they have glitters in their eyes.

It’s my turn, I too leave the plane. This time, however, I turn around and take a last look inside. Flying with Alitalia, especially abroad, was like feeling a bit at home. The Magone I still have it, now that I’m out.

In Fiumicino, maintenance workers hand out roses to the hostesses to the delight of cameramen and photographers. I meet the commander who is about to leave and I say: “Good luck”. And another member of the crew seems to want to reassure me: “We bet it’s not goodbye? It’s just a goodbye ”.