Journey to the Italy of the green pass 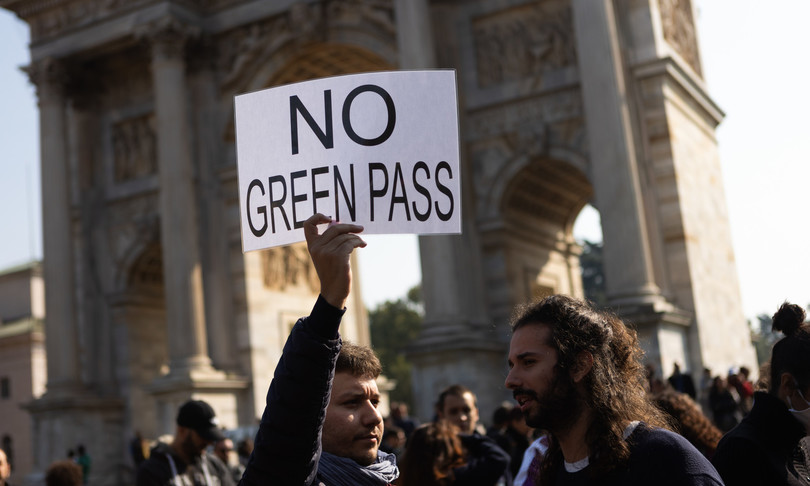 Parades throughout the country, garrisons in front of ports and factories, but the feared general paralysis did not occur. No critical issues in large factories: according to union sources, there have been no reports of problems at least in large groups, such as Acciaierie Italia, Fincantieri, Hitachi, Leonardo, Stellantis, Electrolux, Whirlpool, Ast di Terni.

On the day of entry of the obligation of the green pass in the workplace “there are no problems, the day is not characterized by tensions and contrasts apart from a few single working realities “said the general secretary of the CISL Luigi Sbarra.

“The situation in the points of sale of our companies is regular and without inconvenience. At the moment, there is an overall average of workers without Green Pass of the order of 2-3%, lower than forecasts “Federdistribuzione said.

The first doses of vaccine administered rise, likely Green pass effect, which see “a positive trend in recent days”: yesterday 73,296 inoculations were recorded, an increase of over 34% compared to the beginning of the week.

But how did it go in the big cities?

Presidia were announced at Pirelli in Settimo Torinese and Iveco in via Puglia, as well as at Fiat Avio. Thirty-five canceled journeys and intermittent services until the end of the shift on the 9 lines of local public transport in the city of Novara No particular problem on the Amazon site of Novara Agognate, the latest addition to the Italian network of the global e-commerce giant. The approximately 200 employees who work in the new plant, inaugurated about a month ago, and the employees of the suppliers who enter the structure which is located a few steps from the Novara Ovest tollbooth on the Turin-Milan, must scan the QR code of the Green Pass in the appropriate totem readers that are positioned at the entrance.

Three gatherings of demonstrators: the most participated in the Arco della Pace (the only one forewarned and authorized) with the presence of about a hundred people. The other two, self-announced with a rumor on social networks, outside the courthouse (about 30 protesters) and from the University of Studies (about 80). Outside three ATM depots (San Donato Milanese, via Novara and viale Sarca), bells of employees were formed, in total 60, without green certification. However, there were no moments of tension.

A thousand people demonstrated in Piazza Dante in Trento in front of the headquarters of the Autonomous Province of Trento with banners and placards also against the anti Covid-19 vaccination. No transport disruptions were reported. Sit-in also in Bolzano, in Piazza Tribunale, organized by the movement of active parents. Under the inscription of the German Jewish philosopher Hannah Arendt, “no one has the right to obey” to cover and weaken the bas-relief of Mussolini on horseback, about 200 people gathered silently without displaying signs.

Traffic blocked in front of the Ethiopia gate of the port of Genoa, in the Sestri Ponente area. At the cry of “freedom” and “hands off work” about 300 people poured into the street. the system of Ligurian pharmacies represented by Federfarma “holds up the brunt” of the surge in demand for tampons. To meet the workers, many pharmacies also opened very early, as in Sestri Ponente where the shutters were raised before 5 to meet the factory workers. Many and long queues to request the tests: 450 swabs were made yesterday in Sestri Ponente in one day, this morning in mid-morning they were already 450 and they expected to close this Friday with 800-1000 swabs. No protests or critical issues were reported for the expectations, explained by Federfarma. In line many different workers, from workers to market traders. In any case, the pharmacies in Liguria did not go below 50 swabs this morning. The demand for vaccines has also grown. Furthermore, Federfarma recalls, on Monday the anti-flu ones will also arrive and from Tuesday we will start with inoculations in the pharmacy.

Massive participation in the protest in Bologna. The procession, which started from Piazza Maggiore, increased along the way, gathering over 5000 people. The demonstrators arrived in via Aldo Moro, a few steps from the headquarters of the Emilia Romagna Region, whose entrance was manned by a police cordon. Insults addressed to the President of the Region, Stefano Bonaccini, started from the procession. Constant then the chorus “Shame”. The demonstrators then set off again to go under the headquarters of the regional Rai.

Presidio no green pass in Florence on the day when it becomes mandatory to show the certification to access the workplace. More than a thousand people from all over Tuscany gathered in Piazza Santa Maria Novella to protest against the green certification shouting “Freedom, freedom”.

The port of Ancona and the main companies of the Marche region have successfully overcome the return to work with the obligation of a green pass. The worries of the eve have subsided already in the middle of the morning, when the first accounts were made with the people left outside the entrances or protesting in the squares. Just under 200 in Piazza del Plebiscito in Ancona, where a delegation of demonstrators was received by the prefect Darco Pellos, as many in Via Mattei, one of the main arteries inside the port area, where ‘no vax’ and ‘ no green pass’ coming from other areas of the Marche.

Protest slogans, banners against the ‘vaccine dictatorship’, but those who wanted to go to work were able to do so regularly. In the regional capital city, the procession that crossed the port to finish in the center sent the city traffic into a tailspin, while about ten trucks were prudently stopped until mid-morning on one of the overpasses that lead to the embarkations and to the area. shipbuilding. Road and free access in front of Fincantieri, where the company has organized different entrances for all shifts.

In the mechanical engineering district of Fabriano, the unions reported “a calm situation in all the main companies”, no protests and “fluid and positive” management of the entrances to the factory. Only 1% of workers would have been rejected with unjustified absence, but among these there are not only the ‘no green passes’. In Pesaro, the protest demonstration scheduled in front of the municipal theater gathered no more than one hundred people, while there were no reports of critical issues from the main companies in the province, where two important furniture and mechanical districts are based. The climate is substantially relaxed even among the companies in the Macerata, Fermano and Piceno areas.

Protest demonstration also in Cagliari, promoted by the ‘Italexit con Paragone’ party. About 50 people organized a sit-in in front of the Prefecture.

A small group of demonstrators was turned away from via Labicana, in the center of Rome, by the police around 8 am. of Porta Maggiore. High tension in the city both for the authorized event of Circus Maximus and for any spontaneous garrisons.

Without any particular problem or protest the first day of mandatory green pass in Basilicata. In the main public offices of Potenza and Matera, security guards and security officers checked the Qr code of employees and there was no particular criticality.

About 300 people walked the short stretch that separates piazza Antonello from piazza Unione Europea, in front of the town hall shouting “No Green pass”. A heterogeneous and peaceful square made up of citizens, workers, students demonstrated to ask for the revocation of the provision, displaying signs with slogans that read “Green pass is freedom but it is slavery”, or “Think different no Green pass”, under the gaze of the police