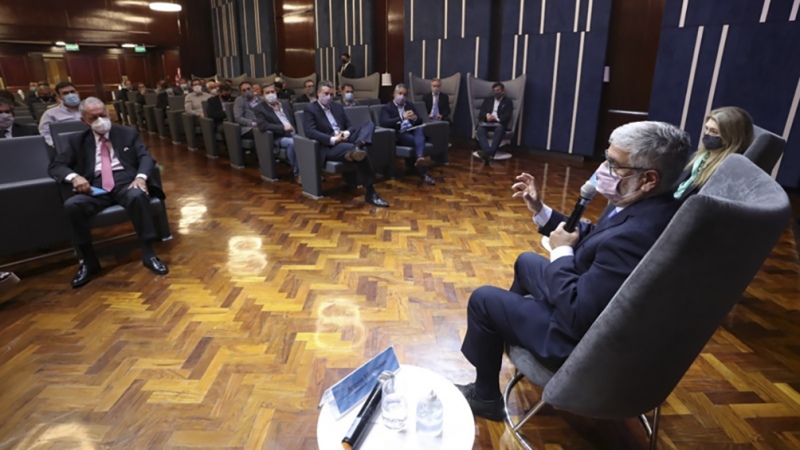 The Secretary of Internal Commerce, Roberto Feletti, announced this Monday afternoon that with the business sector they opened “a 12-hour waiting period” to continue negotiating and reach a price agreement at the values ​​in force as of October 1, which will be extend for 90 days, with the aim of having the understanding sealed tomorrow afternoon.

In a press contact after the meeting, Feletti said that “there is a vocation for an agreement, but firmness in the need to specify it because the acceleration of the prices of the basic basket is an issue that greatly worries the national government.”

“Between October 1 and 18, the supermarket basket increased 2.2%, with products that registered increases of between 10 and 25%”, emphasized the official, by emphasizing the government’s decision that the prices of the products that are part of the agreement be rolled back to the first business day of the current month.

“The idea is to bring prices back to October 1, consolidate the 670 products from Priced Care, add from the original list of 1,200 products that we had sent another 900 products, incorporate Super Close prices and have a diverse basic basket”, Feletti detail at the end of the meeting.

The agreement promoted by the Government points to a consolidated list of 1,650 products with fixed prices for 90 days, around 350 items more than the initial list formulated last Wednesday by the official.

In this regard, he pointed out that the Government’s proposal to businessmen is to backtrack with increases of between 10 and 25% that they detected in the first half of October in products such as cans, coffee, personal hygiene and cleaning supplies, among others. , and “take advantage of a scenario with a higher level of consumption that they will be able to take advantage of by quantity and not by price.”

“From today’s meeting there were many statements in favor of the agreement and I have no reason to disbelieve it, that’s why we opened this waiting period of about 12 hours””

“There are 47 companies that offer more than 10 products each and have 72% of the list. It does not seem such a big effort to agree for 90 days, we know that we are not affecting the profitability of anyone. It is time to take advantage of the expansion of consumption and earn by quantity and not by price ”, said the secretary.

Feletti said that “We are talking about an agreement with the most powerful companies in the country for only 90 days” and that new “conditions” will be discussed again next January.

“In Argentina and anywhere when there are concentrated or oligoplastic markets and prices are left free, in general the consumer does not have a good time and we want to prevent that from happening. Therefore, this is a positive intervention by the State, respecting profitability of companies, but for there to be an expansion of consumption “, he stressed.

About the possibility that, before freezing, there would be a food shortage, Above contest que “There shouldn’t be because they have installed capacity, which today is 62% in Argentina and up to 80% (of that potential) there should be no supply problems.”

“They have the possibility of taking advantage of a consumer market that is going to expand without much effort because there are more people on the street and more movement,” said the Secretary of Commerce.

For the private sector, Daniel Funes de Rioja, head of the Coordinator of the Food Products Industries (Copal), an entity that brings together some thirty chambers and more than 2,000 companies in the sector nationwide, highlighted at the end of the meeting that it was “in a very good tone and there is a very good level of dialogue” with the Government.

“There is dialogue and a willingness to agree on both sides,” said Funes de Rioja.

Unlike the “waiting time” set by Feletti of 12 hours, so the understanding should be closed tomorrow afternoon, the head of the COPAL and the UIA, asked that the term be between “24 or 48 hours “to” answer that everything is closed because it depends on what each of the companies can agree on “.

“We are talking to reach an agreement and we aspire to do so”, stressed the owner of the Copal.

Regarding the original list of 1,200 products, he said that “it has been modified because there are products that are no longer in circulation but products with careful prices and the Super Cerca campaign have been incorporated,” said the business leader, who denied that at the meeting the possibility of applying the Supply Law has been mentioned, although “there was eventually talk of a ministerial resolution.”

“In our understanding there are some premium products that should not be there but we come to talk“, notes Funes de Rioja.

On this last point, Feletti pointed out that “it is not a question of thinking that in food there are luxury consumption but it is the right of the middle sectors and workers to be able to consume the last 3 months of the year in peace.”