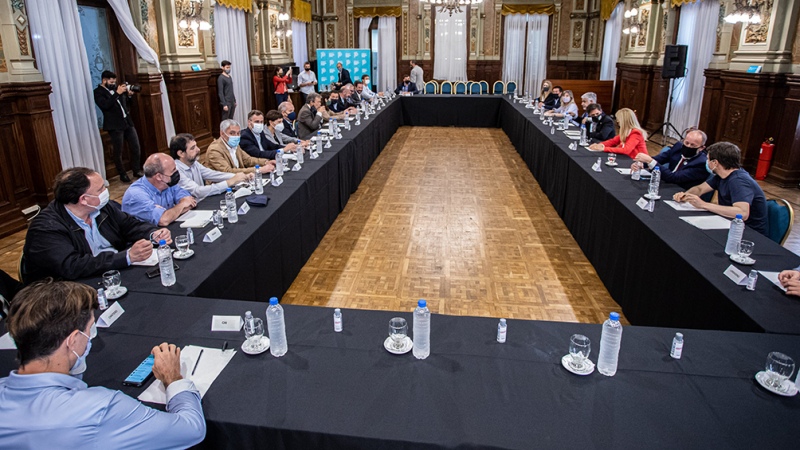 The provincial president met with Feletti and mayors of the AMBA.

The governor of the province of Buenos Aires, Axel Kicillof, supported this Wednesday the measures adopted by the national government to order the prices of mass consumer products and assured that it would work together with the municipalities “to take the lead in price control”That was set this Wednesday by the Secretary of Internal Commerce.

The president explained that “the proposal is to work together with the municipalities in terms of controls, since we are observing a very accelerated growth in prices that leads to the fact that, although Argentines are improving their income, they end up consuming the same” .

“We are coming out of the pandemic and we have to seek consensus and work so that the reactivation is not taken advantage of by a few “, he remarked, underlining that” after having lost purchasing power during the previous government and as a result of the pandemic, we must articulate the necessary policies so that improvements in income are not absorbed by increases in prices ”.

“We must put ourselves at the forefront of price control: from the province and the municipalities we are going to provide territoriality to take care of the pockets of Buenos Aires residents”, grafic.

Kicillof made statements after a meeting he held in La Plata with the Secretary of Internal Commerce, Roberto Feletti, and mayors of the metropolitan area, in order to coordinate measures aimed at guaranteeing compliance with the temporary fixation of maximum prices established on mass consumer products.

The Government reported that the mayors of Together for Change were also invited to the meeting, although they gave up attending.

For his part, Feletti explained that “the relationship between the basic food basket and workers’ wages had deteriorated, and it was observed that in the first days of October some prices had increased from 10 to 20 percent ”.

“Faced with this situation, we summoned producers and entrepreneurs from wholesale and retail chains to propose that prices had to be brought back to those at the beginning of the month and freeze them for 90 days,” he explained.

The secretary specified: “As we continue talking, we have published a resolution that covers a wide and diverse basket with more than 1,400 products“, Although clarifying that” this measure now requires the presence of the State, with the different government agencies monitoring that the agreed prices are met. ”

We meet with mayors and mayors to coordinate efforts and guarantee the stability of the prices of the basket of mass consumption products.

Together with the national government and the municipalities, we are going to work to take care of Buenos Aires families. pic.twitter.com/edRuUndMPf

The meeting was also attended by the Lieutenant Governor Paint Magario; the Buenos Aires Chief of Cabinet, Martn Insaurralde and the Undersecretary of Commerce, Dbora Giorgi.

They were also made by the provincial government ministers, Cristina lvarez Rodrguez; of Production, Science and Technological Innovation, Augusto Costa; and of Infrastructure and Public Services, Leonardo Nardini and the head of the Ombudsman of the Province, Guido Lorenzino.

On the side of the mayors were the communal chiefs of Almirante Brown, Mariano Cascallares; from Avellaneda, Alejo Chornobroff; de Berisso, Fabin Cagliardi; from Ensenada, Mario Secco; from Escobar, Ariel Sujarchuk; from Ezeiza, Alejandro Granados; by Florencio Varela, Andrs Watson and de La Matanza, Fernando Espinoza.

The mayor of Ensenada, Mario Secco, stressed that “we mayors have to show strength to accompany this measure that allows us to reach those who need us most”, while the communal chief of Quilmes assured that “we agree with the decision to deepen careful pricing policies ”.