Take care of your pocket: operations to control prices advance 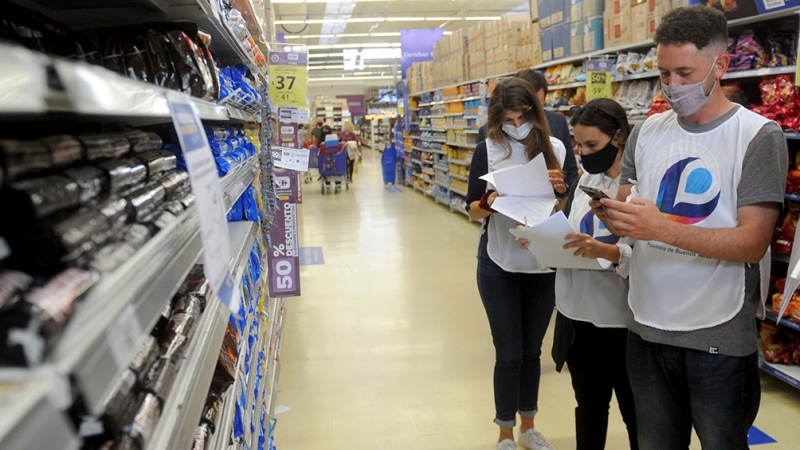 The Government refined the details of the operations that will be launched to guarantee compliance with the resolution that froze the prices of more than 1,400 mass consumption products for 90 days, while again demanding the solidarity of businessmen to “take care of the pocket of the Argentines “.

The matter was one of the axes of the meeting led by President Alberto Fernández in the Quinta de Olivos with national officials, Buenos Aires mayors and leaders of the ruling coalition, such as deputies Sergio Massa and Mximo Kirchner.

In that meeting, the President called for a “strong job in defense of the pocket of the Argentines, guaranteeing the stability of prices and taking care of the families”, said official sources.

The Government issued a resolution this week freezing the prices of 1,432 mass consumer products until next January 7.

The Minister of Social Development, Juan Zabaleta, affirmed after the meeting in Olivos that the basket of mass consumer products at convenient prices Launched by the Secretary of Internal Trade, Roberto Feletti, aims to “take care of the pocket of Argentines”, and asked for “solidarity” from businessmen.

“We have to take care of the pocket of the Argentines, it is a demand, it is a necessity and from tomorrow each mayor, each official, will go to visit” the territory to control “that measure that was taken of maximum prices”Zabaleta said.

The minister recalled that “during the pandemic, the government assisted many entrepreneurs with the ATP program (Assistance to Work and Production) so that workers could collect their wages, and that was good.”

“Now we need businessmen to help us to take care of the pocket of the Argentines,” Zabaleta stressed.

During the meeting it was also agreed that mayors and officials of the Government of the province of Buenos Aires carry out controls to help achieve faithful compliance with the official resolution.

In this regard, the mayor of Berisso, Fabin Cagliardi, confirmed that this Saturday they will begin to “control prices in the municipalities” and said that the communal chiefs promised to “be well above that.”

In turn, the mayor of Ensenada, Mario Secco, said that “it was a management meeting”, where “there was talk of the economy” preparing “for the next two years of government”, because “politics is the only that solves all the issues. ”

At the meeting, the President was accompanied by the Chief of Staff, Juan Manzur; Chancellor Santiago Cafiero; the Zabaleta ministers; of Public Works, Gabriel Katopodis; of Agriculture, Livestock and Fishing, Julin Domnguez; from the Interior, Eduardo De Pedro; of Security, Anbal Fernndez; of Territorial Development and Habitat, Jorge Ferraresi; and Transport, Alexis Guerrera.

The Secretary General, Julio Vitobello; the Secretary of Habitat, Santiago Maggiotti; the owner of Aysa, Malena Galmarini; the general administrator of the National Highway, Gustavo Arrieta; and the president of the Chamber of Deputies of the Nation, Sergio Massa.

The Buenos Aires governor, Axel Kicillof, participated by videoconference, because during the afternoon he was in the municipality of Mar Chiquita.

There, during a contact he maintained with the press, Kicillof criticized the companies for not voluntarily adhering to the price agreement promoted by the national government and said that “being an opposition does not mean opposing everything” and that what should be privileged it is the care of the “pocket of the people”.

“It is really an unusual situation because the national government’s proposal is perfectly reasonable, it does not threaten the profits of companies, we simply seek to give a break to the pockets of people who are trying to recover from the pandemic and regain life prior to the pandemic. “said the governor.

Regarding the opposition, Kicillof said that “if they want to make a political use and go against what benefits the people, let them say directly: as there are elections, we prefer there to be inflation and thus there is discontent” in the population, said the leader.

“The truth is that one hopes that they will at least collaborate and not go against the people, the pockets of the people and the access to food of the popular and media sectors that need it so much,” added the Buenos Aires governor.

With regard to the basket of mass consumption products established by the Ministry of Internal Trade, the United Supermarkets Association (ASU) and the chains that make it up, they affirmed that they are working so that “the price change” resulting from the decision official to freeze the values ​​of 1,432 items “be reflected in the shelves as soon as possible.”

“In the last week, the supermarket chains have worked for the implementation of Resolution 1050/2021, ordered by the national government,” ASU stated in a press release.

Beyond ratifying their willingness to comply with the measure promoted by the Government, the supermarkets said that they require the “commitment” of the producer-supplier companies “to meet and maintain their service levels.”