A Jordanian turns to social media 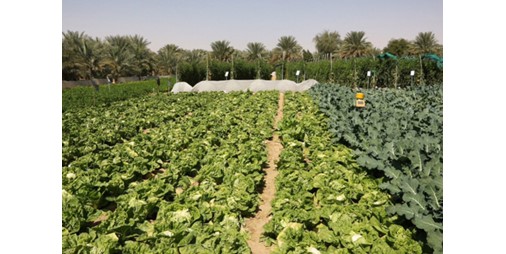 Having gone on a field trip to the Jordan Valley, the country’s fertile breadbasket, while studying, Ayad felt the need for the average Jordanian to learn about the products he consumed, but in places other than store shelves.

The 27-year-old, walking around in a greenhouse, said he started posting videos and photos highlighting the farming process and farmers’ troubles to raise awareness of the sector’s importance.

He talked about his trip, saying, “See, I graduated from the University of Jordan in 2017. I started loving agriculture when we went to the practical valley chapter. We had practical experience in dealing with plants and dealing with content. We are talking about agriculture in a practical way.

I loved the subject, so I started photographing the agricultural products that I see for us at the research station at the University of Jordan.”

He added, “People have felt a great interaction with the issue of agriculture. How do people see the product of the bedding before it reaches the market? They see the details. All these people are currently busy with their working life. They only see these products in the market.”

The agricultural sector produces about 45 percent of the country’s needs while 55 percent of the food consumed in Jordan is imported, especially staple foods such as wheat and pulses, according to a United Nations report published in February 2022.

With tens of thousands of followers interested in local farming techniques, Ayyad’s presence on social media played a role in linking farmers with foreign entities and with merchants to market their products.

Suhaib Ayyad stresses the importance of the issue of food security and the need to maintain agricultural production in Jordan.

He says, “By God, Suhaib’s engineer, his initiative is very sweet. I mean, by opening a new atmosphere in the farms… Let’s say some of the areas that have been affected by beautiful (the beautiful) and reflect the suffering of the farmers, which means that it reflects the sweet fruit and the efforts of the farmer.”