Bayer announced investments in Argentina for US $ 156.4 million 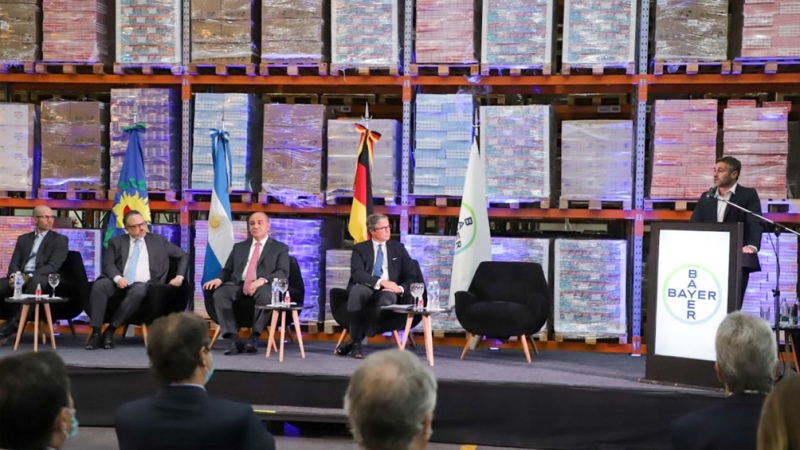 The event in the Pilar Industrial Park. Bayer employs 2,200 people in the country.

The multinational Bayer announced this Wednesday investments in Argentina for US $ 156.4 million for the next three years, which will be allocated to new developments with 70% local contracting, and improvements in production processes in all its operations focused on supply domestic market, import substitution and increased exports.

The announcement was made at a ceremony held at the company’s industrial plant in the Buenos Aires province of Pilar, with the presence of the Chief of Staff, Juan Manzur; from the Minister of Productive Development, Matas Kulfas; of the local mayor, Federico Achval; and the German ambassador to Argentina, Ullrich Sante. The secretaries of Industry, Ariel Schale, and of the Small and Medium Enterprise, Guillermo Merediz, also participated.

“I want to convey the affection and gratitude from the President (Alberto Fernández) for all the support and work that the company has been doing in Argentina. It is a gesture of trust towards the country that we greatly value because it represents predictability, sustainability and a commitment towards the future “, indicated Manzur, who added:” We are an extensive federal country, with diverse cultural idiosyncrasies, with different economies and with enormous forward potential. ”

With great joy we visited the plant @Bayer4CropsAR in Pilar, Province of Buenos Aires, where its authorities announced the investment of US6 million in the six operating plants they have in the country, for innovation, digitization and sustainability projects. pic.twitter.com/QOZV8oR7rW

For its part, Kulfas stressed that “there is no doubt that this is the way, focusing on production and national work, with Argentine science and technology to contribute and complement what international investments transfer to us. ”

The minister also maintained that “it is about being able to generate productive networks with a lot of national work, with knowledge and with development throughout the territory”, and affirmed that “this photo synthesizes much of what we are looking for and what we want to deepen in the coming years. ”

“We reinforce our long-term commitment in Argentina, sharing with the community our investment plan for the coming years,” he said. Juan Farinati, Agro Division Leader and Bayer Executive Director for Argentina starting next November.

The investment plan will have a special focus on innovation, digitization and sustainability, and as part of it, the productive capacity and operational management of the industrial plants of Pilar, Mara Eugenia (Rojas) and Zrate will be promoted, all in the province of Buenos Aires. Aires.

As, “dozens of small and medium-sized Argentine companies will be an essential part in the implementation of this process, since 70% of the investment will be contracted locally, “Bayer said in a statement.

“At the Pilar pharmaceutical products plant, the largest tablet factory in South America and one of the three largest in the world of its kind, where the production of multivitamins and analgesics is mainly concentrated, we will increase our investments, “said Farinati.

The officials toured the company’s facilities with the homeowners.

In this way, he remarked that this will allow “the expansion of productive capacity, improvements in processes applying data science, new technologies and digital fluency, with the highest management and biomedical quality standards.”

“This will allow to enhance supplying the local market and meeting the demand of other Latin American countries, as well as China and Southeast Asia“said the executive.

The event was also attended by the secretaries of Industry, Ariel Schale, and of the Small and Medium Enterprise, Guillermo Merediz.

Regarding the rest of the investments, Bayer specifies that in the plant of products for protection of crops located in Zrate, innovative projects will be developed for new packaging that promote sustainability, in addition to expanding and modernizing the equipment to increase local production and substitute imports. .

In the Mara Eugenia plant, recognized worldwide for the level of excellence of its production capacity, and the largest in the world in the processing of corn seeds, production will be increased through investments to continue expanding the corn seed processing capacity.

This will translate into a new conditioning line for the new Vt4 Pro corn, the construction of a new control room for the classification tower, the improvement of the seed curing process and the improvement of processes with an impact on sustainability.

Part of this investment will be focused on developing innovative processes that seek to achieve the company’s goal of becoming a zero-carbon organization by 2030, and reducing the impact of greenhouse gases on agriculture by 30% by the same year. .

Bayer has been present in Argentina for 110 years, and has 2,200 employees distributed in its six plants of which two are in Pilar, another two in Zrate, and the rest in Rojas and Las Heras.

It also has a learning center in the Buenos Aires town of Pergamino; technological innovation stations in Fontezuela (Pergamino), Rio IV (Cordoba), Chacabuco (Buenos Aires) and Tucumn; and a vegetable production center in Mendoza.