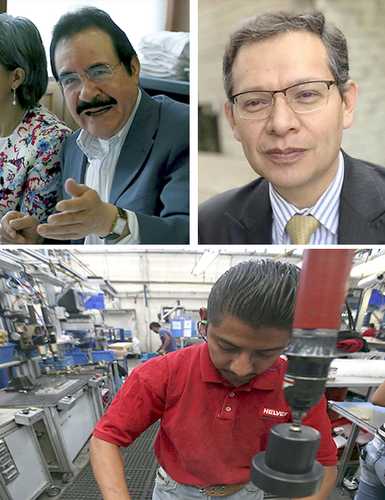 The industrial policy proposal of the federal government cannot yet be considered the series of instruments that promote the secondary sector so that Mexico has a manufacturing gross domestic product (GDP) of 7 percent per year as it was before the neoliberal period, according to experts, although they recognize that it is a paradigm shift in economic policy.

In recent days, the Ministry of Economy (SE), together with the Treasury, the development bank and the private sector, presented the document Towards an Industrial Policy, which seeks to be a route for the sustainable development of the industry through technological innovation, support for micro, small and medium-sized companies and the strength of the internal market. The plan is transversal, but the greatest support will be for the strategic sectors: agri-food, electrical-electronic, electromobility, medical and pharmaceutical services, and creative industries.

This initiative is a paradigm shift, a change of direction in economic policy and that is rightconsidered José Luis de la Cruz, director of the Institute for Industrial Development and Growth (IDIC), whose work served to shore up the proposal, as stated by the head of the SE, Tatiana Clouthier Carrillo.

However, José Luis Calva, a researcher at the UNAM’s Economic Research Institute (IIEc), stressed that it is not an industrial policy, because it does not have not a single instrumentso it only remains in a set of well wishessimilar to what has happened since the administration of Ernesto Zedillo Ponce de León.

De la Cruz considered that the initiative contains concepts of industrial policy, which he defines as the coordinated measures of economic policy and whose objective is the development of the industrial sector, in order to have higher levels of growth and economic and social development. It is an exercise that needs even more work to outline what an industrial policy is going to be.

Calva considered that a real industrial policy can drive the Mexican economy to growth of 6 percent per year, De la Cruz estimated that the effect of the current proposal will add between 0.5 and one percentage point in 2 or 4 years.

José Luis Calva recalled that Mexico has not had a true industrial policy for more than 30 years and referred to Jaime Serra Puche, head of the then Secretariat of Commerce and Industrial Development (Secofi, now SE) in the administration of Carlos Salinas de Gortari, who pointed out that the best industrial policy is to have no industrial policy.

Since the neoliberal economic strategy began to be applied in Mexico, since the times of Miguel de la Madrid, the instruments of industrial policy that favored the development of Mexico from the time of (Lázaro) Cárdenas until 1982 were dismantledI note.

The author of the chapter Industrialization strategies in Mexicowhich is included in the book Industrial policy in Mexico” published by the IIEc, argued that the SE document he wants there to be digital innovation and scientific technological trends, training of human capital, promotion of regional content, linkages with MSMEs and sustainable and sustainable industry.

He explained that industrial policy must include macroeconomic policies favorable to manufacturing industrial development and respond to how, when and with what are you going to support meas happened at the time of the Mexican industrial miracle and is now happening in countries like China, the United States, Germany, Japan and South Korea.

One of the instruments is the competitive real exchange rate that allows national industrialists to compete in international markets, since the undervalued currency allows products to be competitive, as has been seen in China and South Korea. Calva stressed that this is not in the document.

He mentioned that there are also no horizontal instruments for manufacturing promotion that apply to any type of industry, that is, credit support at preferential rates for MSMEs and subsidies for research and technology transfer.

There is also no support for companies with market research and external promotion of products, that is, other subsidies.

He indicated that it does not include training and advice to development banking entrepreneurs either.

There are, he added, no sectoral instruments for certain areas of the industry, nor selective trade protectionism, despite the fact that there is room for maneuver under the rules of the World Trade Organization and the Mexico, United States and Canada Treaty.

There is not, he noted, a chapter on public purchases, much less leverage with risk capital, in which development banks and companies participate.

The sectorized instruments are made like tailor-made suits and there must be a commitment from the industry that is monitored by the government so that it is fulfilled, as happened in the management of Antonio Ortiz Mena in the Treasury, which led to their being manufactured in the country motors for cars, because they had to comply with 100 percent of the national content.

Respond to the situation

De la Cruz affirmed that the proposal responds to what is happening worldwide. Industrial policy has once again become the central element in the strategies of China, Japan, South Korea, the United States, France, Germany and India.

Asked if the budget could be an obstacle, he answered no, since the proposed economic package has 200 million pesos more in physical investment in real terms, which is an increase of almost 22 percent compared to what is spent in the present year.

In addition, industrial policy can favor the arrival of foreign investment due to the nearshoring.

What industrial policy can do is facilitate the arrival of these companies, under the guidelines of the policy and without the need for resources, why is there a need for companies to reach North America to avoid conflicts between China and the United States JoinedI note.