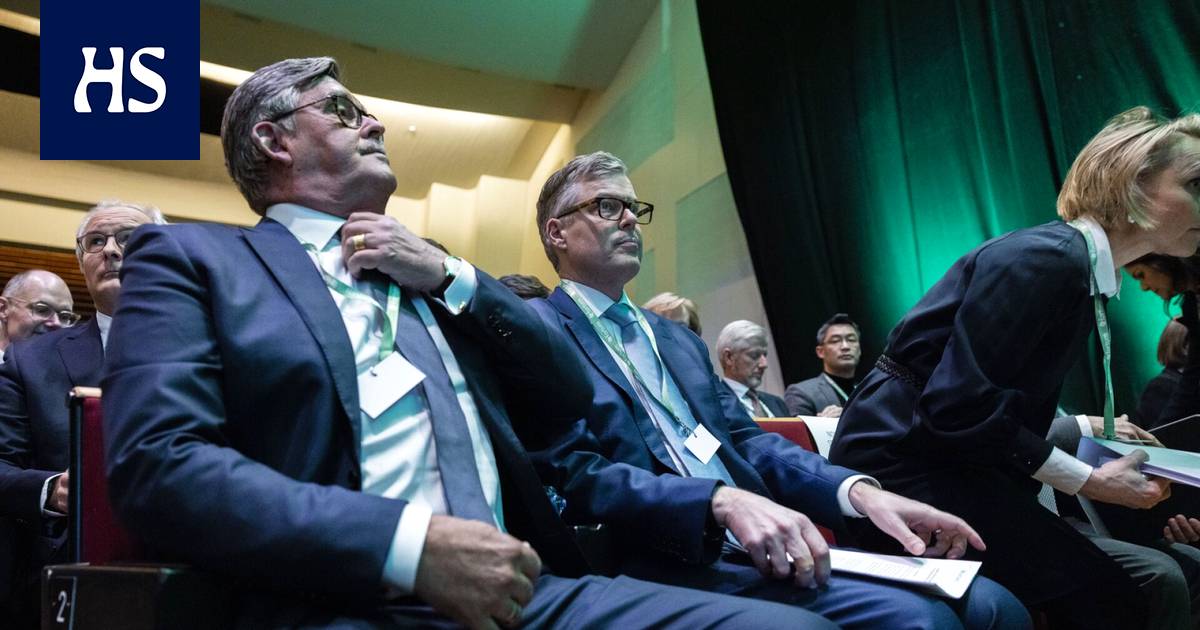 At the general meeting, CEO Markus Rauramo told how the company was in a difficult situation at the end of the summer, when it resorted to the criticized state emergency funding.

The general meeting was convened to decide on the acceptance of emergency funding provided by the state. The terms of the financing and the way in which Fortum and its largest owner, the Finnish state, had agreed on the matter, have aroused indignation among the company’s minority owners.

“This kind of action by the state and Fortum is absolutely outrageous,” said the Helsinki resident Ilpo Finland upon arrival at the meeting place.

Ilpo Suomi strongly criticized the actions of Fortum and the state before the meeting on Wednesday. Picture: Juhani Niiranen / HS

Fortum grabbed the state’s 2.35 billion euro emergency loan in September. At the time, the company was short of cash due to the growing collateral requirements of the electricity derivatives market. The terms of the emergency loan are harsh: the interest rate is no less than 14.2 percent, and in addition, Fortum has to organize a free share issue, with which the state investment company Solidium gets a percent ownership stake in Fortum. At Fortum’s current exchange rate, the value of the shares is approximately EUR 130 million.

Among others, the Stock Exchange Foundation and Finnish equity savers had already announced their opposition to the arrangement. In order to make its position visible, Sakesäästätäjät had set up a tent in front of the meeting place, where it offered donut coffees to the meeting participants. The association brought shareholders by bus from Uusimaa, Varsinais-Suomi and Pirkanmaa. More than 160 participants were present at the meeting.

Approval of the share issue requires a two-thirds majority, and the state owns 50.7 percent of Fortum’s shares. Still the CEO of Sakesävästätätien Victor Snellman arrived at the meeting with the aim of overturning the motion. He said that he had made various calculations about the scenarios in which it would be successful.

“It’s really a toss of a coin, how it goes,” Snellman estimates.

Many shareholders who came to the meeting had prepared speeches, presentations and questions.

“I’m expecting a pretty intense meeting”, the shareholder Irja-Liisa Ailio said in the lobby of the Cultural Center.

“The agenda is short, the meeting may not be”, also predicts the chairman of the board of Fortum Brother Matti Reinikkala in his opening statement, and he wasn’t wrong

Five hours during the long meeting, Reinikkala and the CEO Markus Rauramo were able to answer dozens of investors’ questions.

Two themes recurred in the questions and speeches. Investors tested the company’s management as to whether Fortum really had no other option in September than to rely on the government’s emergency loan, the terms of which were so harsh for the company. At the same time, they argue time and time again how the arrangement violates the equality of shareholders.

“The arrangement means the transfer of around 130 million euros of assets from the minority owners to the state,” summed up the portfolio manager of the pension company Ilmarinen Rami Vehmas and announced that Ilmarinen, Fortum’s second largest shareholder, opposes the arrangement. The speech received resounding applause.

At the meeting, Rauramo opened up about Fortum’s difficult financial position at the end of the summer with a whole new level of precision. At that time, Fortum gave a reassuring message to the public about its financial position, but now Rauramo’s speeches painted a different picture of the situation.

“Fortum did not have and does not have access to normal financial markets,” Rauramo said.

He said that before relying on Solidium’s financing, Fortum had withdrawn the last installment of the EUR 5.5 billion standby credit offered by the banks. Of the 30 or so banks used by Fortum, none could or wanted to offer the additional financing of a couple of billion euros that Fortum needed. At least in part, this was due to the fact that at the same time all energy companies were applying for financing, and solvency regulation began to limit how much risk related to one industry the banks could bear.

In addition, the Uniper mess, the unclear future of the Russian operations and the risk of a credit rating drop increased the risks associated with Fortum so that the company could not apply for financing from the bond market.

Money the shareholder asked why Fortum didn’t organize a general share issue to raise funding, in which all owners could have participated if they wanted to. According to Rauramo, organizing the share issue would have taken months, and there was no time for this.

Financial adviser who represented the Government’s ownership management Maija Strandberg emphasized that the funding was arranged in an extraordinary hurry.

“In practice, the loan had to be arranged during one weekend,” said Strandberg.

At the meeting, Strandberg heard several times how dissatisfied the other owners were with the actions of the state owner.

“If we’re being honest, the state is buying its own company. It is against our interests”, summed up one.

Amid the criticism, Rauramo repeated his core message:

According to him, rejecting government emergency loans would be “very harmful” for the company.

Overpowered the majority of shareholders finally agreed. When the meeting finally got to the voting stage, 93 percent of the votes supported the proposal and only 6 percent opposed it.

The rebellion dried up.