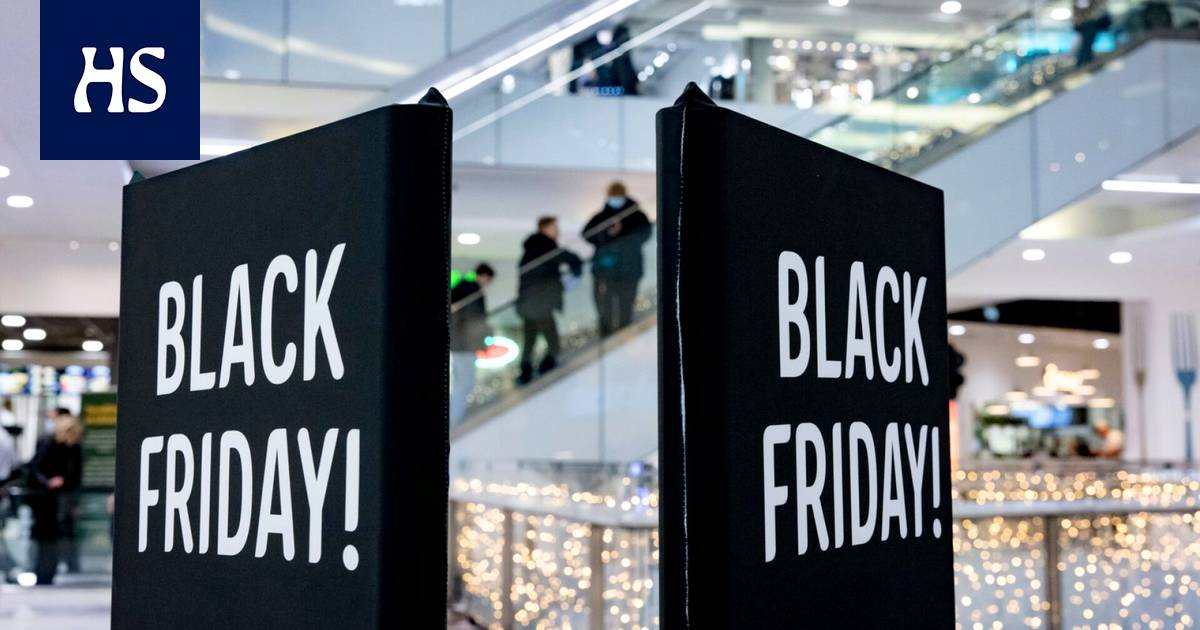 In a survey by the network’s price comparison service, up to 11 percent of this year’s Black Friday offers were revealed to be “fake discounts”. According to the Finnish Competition and Consumer Authority’s expert, cheating with discounts is not a new thing.

Beds 70 percent and shoes with a 50 percent discount – should you buy when you can get it cheap?

The big sales day Black Friday is rolling out huge discounts on electronics, furniture, clothes, cosmetics and just about any product on Friday, November 25. In many stores, the campaign has already lasted a week or even a month.

But are the discounts real or gimmicky?

Price guide service in a survey conducted by up to 11 percent of this year’s Black Friday offers were revealed to be fake discounts. The price had been raised before the start of Black Week and lowered again during Black Week. Black Week refers to the week in which Black Friday is.

The data for the comparison was collected between the beginning of October and Tuesday of the discount week, when a large part of the discounts were already running.

“This means that stores want to advertise bigger discounts than they actually offer,” says the Finnish country manager of the Hintaopas website Liisa Matinvesi-Bassett in the bulletin.

He reminds that the product can be obtained at other times for the same price or even cheaper.

“Even though it is the cheapest shopping day of the year as a whole, at the moment no less than 18 percent of the products are sold at an average higher price than in the last month,” says Matinvesi-Bassett.

The price guide constantly monitors the online store prices of more than 800,000 products.

The prices of tools first rose and then fell the most, for which 22 percent of the product prices had changed. Next, the prices had risen and fallen the most for footwear, monitors and watches.

“With discounts cheating is not a new thing”, confirms the leading expert of the Finnish Competition and Consumer Agency Mika Hakamäki. He reminds that campaigning is not prohibited.

“However, some of the discount percentages are bubbles”, he states.

The amendment to the Consumer Protection Act, which will enter into force at the beginning of next year, aims to puncture them.

Starting from the beginning of the year, in connection with the discount campaign, merchants must also indicate the lowest price at which the product has been sold during the previous 30 days.

“A new law will be needed. It makes marketing more transparent,” says Hakamäki.

According to him, the change in the law is aimed at eradicating such discount gimmicks, with which the price of the product is temporarily raised in order to make the discount percentage appear as large as possible. The background is an EU directive that is already in force in several other EU countries.

The new law applies not only to Black Friday, but also to all other sales campaigns.

“I’d be surprised if traders wouldn’t try to sharpen up after this. They do know what kind of damage to the reputation it is if you get caught artificially raising prices before the sale,” says Hakamäki.

Hakamäki reminds us that not all Black Friday marketing is untrue.

“Black Friday can be a reasonable way to get, for example, a television, laptop, game console or phone, if you need one,” he says.

His tip to avoid making a mistake is to think about it. First, you should think about what you really need.

“If you’ve decided to buy, say, a game console as a Christmas gift, it’s worth following the prices of key stores for a while. Once you have an idea of ​​the price level, you can assess whether the campaign price is really cheaper than normal,” he says.

Hakamäki has observed that, for example, prices in furniture stores are often at their lowest at the end of October, when the summer campaigns have passed and on the other hand there is still a long way to Christmas.

“This is not a scientific study,” he adds.

Price guide based on the survey, Black Friday is the cheapest shopping day of the year as a whole.

Finns plan to spend an average of 240 euros on their Black Friday purchases this year, which is 8 euros more than last year.

Consumers expect an average of 25 percent discounts on Black Friday.

However, according to Matinvesi-Bassetti, it is a very optimistic expectation, because according to the report, prices fell by an average of 5.08 percent on Black Friday last year.

S Bank says, on the other hand, that last year’s Black Friday was clearly reflected in S-Bank’s card payments.

On last year’s Black Friday, purchases on the S-Etukortti Visa credit side were paid for almost twice as much compared to other Fridays in 2021.

According to S-Pank, the most popular products on Black Friday 2021 were home appliances and electronics, which were bought in euros at almost six times the rate compared to other Fridays in 2021. In clothing stores, sporting goods stores, and furniture, interior design, and renovation stores, credit cards were used three times as much as on a normal Friday.

Konsulttitalo Simon-Kucher & Partners has found, based on its recent research, that a large number of Finns are more careful with their money this year: 41 percent of Finns have spent less money this year during popular discount days.

He told about the effects of the change in the Consumer Protection Act first Yle.