Yellen defends the social program amid fears of high inflation

US Treasury Secretary Janet Yellen Yesterday (Wednesday) it defended Democrats’ efforts to pass the $ 2 trillion social spending package, in the face of Republican criticism that fiscal policy implemented earlier this year has spurred the economy too much and fueled rising inflation.

“We had very large fiscal assistance,” Yellen told the House Financial Services Committee. “We addressed what was a very significant risk of prolonged economic deterioration,” she said.

Yellen dismissed concerns raised by House of Representatives Patrick McHenry (a North Carolina Republican), the committee’s most senior Republican, and other members of his party, who said the Biden administration had spent too much money on Congress and the White House approving a $ 1.9 trillion aid package in March. Yellen said the package, which was approved in Congress without Republican support, provided vital support to struggling families to stay afloat during the plague.

“Inflation is a matter of supply and demand, and it’s certainly true that the American bailout program puts money in people’s pockets,” Yellen said. “But if you look at the amount of inflation we have and its causes, it’s just one of the factors that helped it swell.”

Also the treatment of the climate crisis inside

Yellen defended the package from March while Democrats are working on final congressional approval for Biden’s spending proposal on the climate crisis, child care and other social programs. Republicans pointed to the March package as proof that additional spending would exacerbate inflation.

“You have made progress with the U.S. aid program, which we have warned will increase inflation,” said House of Representatives Anthony Gonzalez (a Republican from Ohio). “You’re going to make exactly the same mistake with ‘rebuilding better,'” he said, referring to the social spending plan.

Inflation rose 5% in October this year from a year earlier, according to the Federal Reserve’s preferred index – amid strong demand for goods and services that faced bottlenecks in supply chains linked to the reopening of the economy after the corona plague.

Yellen said inflation is driven more by a shift in spending composition, more towards commodities and less towards services, than because of increased government assistance.

The Biden administration has struggled to demonstrate that its policies will help address issues of higher supply and inflation. During the hearing on Wednesday, Yellen said the social spending package would not add to the national deficit or debt, help promote labor force participation and alleviate the financial difficulties of American families.

The non-partisan congressional budget ministry found the package would add $ 367 billion to the deficit over a decade, but Yellen and other Democrats noted that this estimate does not include the expected revenue from steps in the bill that call for stricter tax law enforcement. The White House and the Treasury estimate that these enforcement activities will generate about $ 480 billion in revenue over 10 years, while the Congressional Budget Office estimates that they will bring in about $ 207 billion.

Higher inflation puts pressure on the Fed to raise interest rates earlier next year than senior officials had expected just a few months ago. Yellen testified alongside the chairman of the Federal Reserve Jerome Powell, Who said that inflation risks have increased recently.

“The risks of higher inflation have gone up,” he said Wednesday. While much of the inflationary pressures this year are still related to factors related to the reopening of the economy after the epidemic, inflation “has spread to more areas of the economy,” Powell said.

At a Senate hearing on Tuesday, Powell said the Federal Reserve was preparing to cut its easy money policy faster and open the door to raising interest rates as early as the first half of next year. His remarks caused markets to fall and government bonds to rise. 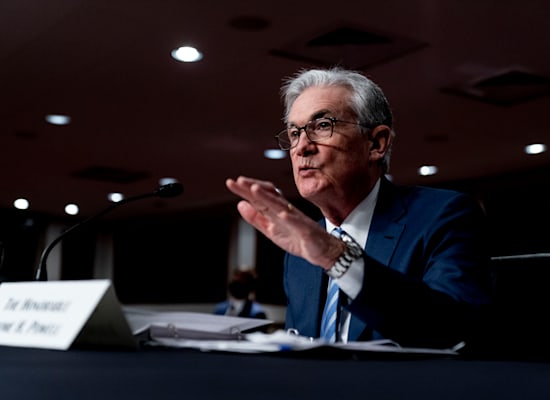 “We will use our tools to make sure that the high inflation we are experiencing does not hit roots,” Powell said Wednesday.

The Federal Reserve is faced with the question of how to set policy within an increase in inflation that has been larger and lasts longer than most private sector economists had expected. The emergence of the coronavirus omicron strain adds a new degree of uncertainty because it can aggravate bottlenecks in supply chains.