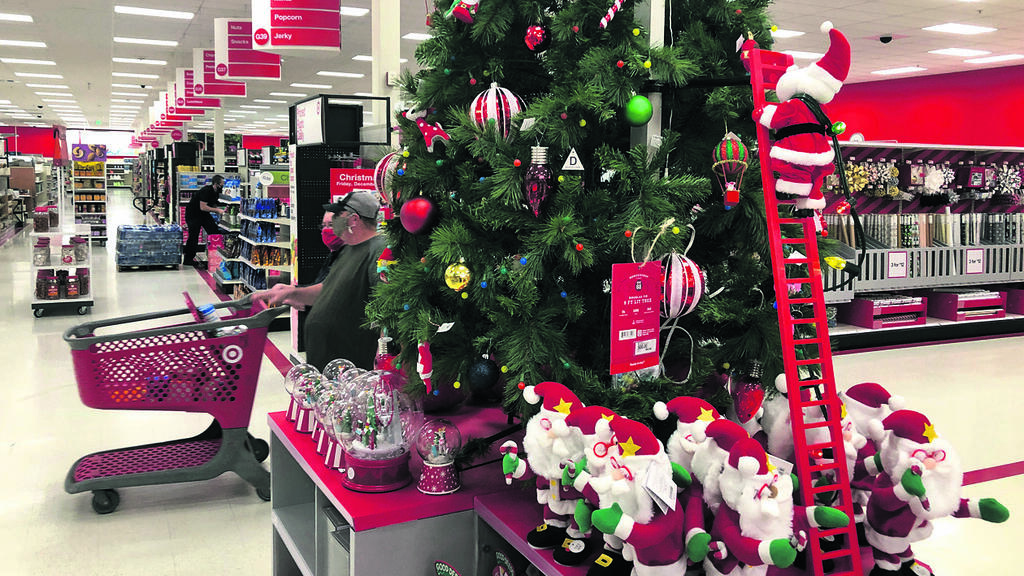 On Christmas Eve, 57% of members of the retail federation had experienced an increase in crime rates since the outbreak of the corona plague, and close to two-thirds reported that gangs of thieves had become more violent than in previous years; The pressure on retailers, who are already facing supply chain problems, is mounting – and now they are demanding that Congress take action, especially against the online markets in which stolen goods are sold.

During the US holiday season, every evening without exception, it starts to snow at The Grove, a trendy mall in the Fairfax neighborhood of Los Angeles. Hundreds of visitors come to watch the night snow show, probably because it’s the closest thing to experiencing in Los Angeles White Christmas. This year more people will attend the festive events than usual because the property’s owner, Caruso, has stepped up security at the mall and added police officers looking for extra income – including members of elite units.

This addition to security comes after a wave of thefts in stores across Los Angeles in particular and the U.S. in general, including an attempted break-in at a Nordstorm store in the Grove in late November. Added in the carousel to strengthen the glass.Three people were arrested.

“It’s a very healthy display of power,” said Rick Caruso, owner of the mall-owned real estate company. He said he trained police officers to be polite so as not to ruin the holiday atmosphere.

However, other retailers have not had such success in smuggling organized gangs of thieves. For example, at the Louis Vuitton Brook Brook store in Illinois, 14 people last month filled huge plastic bags with clothes and other items worth a total of more than $ 120,000. Similarly, in California authorities recently found $ 8 million worth of merchandise stolen from CVS, Wolgrins and Target chains and another $ 85,000 in cash and close to $ 2 million from bank accounts. The situation came to the point where the Wolgrins decided to close five branches in San Francisco after the theft rate there was five times higher than the average in the rest of the state.

This wave of daring and multi-participant thefts has increased the pressure placed on retailers, who are already facing supply chain problems and high demand since the outbreak of the Corona. These difficulties have also rekindled the national debate surrounding enforcement and punishment in the U.S., and company executives point out that it frightens workers.

According to a survey conducted by the National Retail Federation in August, 57% of federation members have experienced an increase in crime rates since the epidemic, and close to two-thirds reported that gangs of thieves have become more violent than in previous years.
The list of reasons they cited for this increase was varied, and included problems with policing, mitigation of punishment, and the growth of the online market. Even the list of the most stolen items was quite varied, topped by designer clothes, washing powders, bags and anti-allergy medications.

There is no one simple solution
Last week, the CEOs of 20 retail chains, including CVS, Home Depot and Target, sent a letter to congressional leaders urging them to act. There is a limited legal framework for action, “they warned.

Retailers want Congress to take special action against online markets, including those run by Amazon and eBay, where stolen goods can be sold, and are asking Congress to approve a bill for fairness and integrity in online retail.

The bill, called the “Inform Consumers Act”, will require the sales sites where outside sellers operate to verify the identity, bank account details and contact details of any “high-volume” seller who sells over 200 products or merchandise worth more than To $ 5,000 a year. However, CEOs have admitted that there is no “simple solution” to this wave of crime. Industry experts say other reasons for the rise in crime are related to police shortages, social problems like the opioid epidemic and corona-related changes that led to the release of thieves who had previously been detained.

Tony Shepherd, director of the loss prevention division at ThinkLP, which develops software for retailers, said most district attorneys still treat organized theft from stores as a minor offense, so there is not too much alert. “The challenge is to educate the people, law enforcement and prosecutors about the differences between the two cases, and secure a different indictment against a person who commits organized theft from stores versus a person who acts alone and steals one or two items,” he explained.

Local authorities are divided over the best response to the problem. Lori Lightfoot, the mayor of Chicago, said she was “disappointed” that some stores on Michigan Avenue do not do more to hire security guards and lock the goods at night, including tying the expensive bags to shelves. But real estate developer Caruso claims the extra security guards are making it difficult for small retailers, who are already facing higher labor costs and supply problems.

Caruso blames the steps taken to reduce the penalties for nonviolent crimes, and in particular California’s groundbreaking Act 47. The law, passed in 2014, reclassified some of the theft and drug possession offenses as minor offenses, so the more serious charges relate only to the theft of goods worth over $ 950.

Caruso, who served as president of the Los Angeles Police Department, was also mentioned as a potential candidate in next year’s mayoral election. He said the “intentions were good” behind Proposition 47, but it failed. “The retail industry needs to unite and act to oblige the administration to take action. If we talk so much about security it means the administration has failed.”

California Gov. Gavin Newsum has argued that large-scale thefts are “unacceptable,” but defended Proposition 47, arguing that law enforcement agencies have the necessary tools to take action against organized crime gangs. Accordingly, he ordered the California Traffic Police to step up patrols near large stores and offered to allocate more money in next year’s budget to fight retail theft.

White House spokeswoman Jen Saki was asked about the issue this week and replied that the Biden administration is working with the Justice Department, the FBI and federal law enforcement agencies to find solutions to the situation. She cited a proposal to raise funding for community policing programs. Retailers, however, are demanding new laws against criminal networks – which often cross jurisdictions and states.

Until coordination between the various entities increases, Caruso fears that small retailers will continue to have difficulty. “For people like me who have the resources for security, the story is different. But most businesses are small businesses that depend on the police for security,” he explained. “And that’s what’s really a pity here.”