Italy: On social networks, the strike is stronger than the fear of Covid 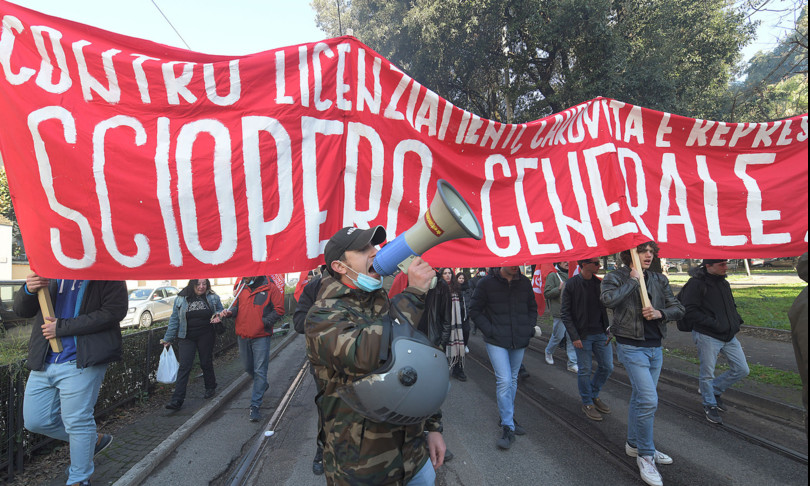 The general strike proclaimed by CGIL and UIL, with the absence of the CISL, brought 10,000 people to Piazza del Popolo in Rome, according to data from sources close to the Police Headquarters. “Together for justice” is the slogan chosen by the two trade unions. Public and private workers from various sectors, from rail and air transport to city transport, highway personnel, couriers, logistics workers, dockers and road hauliers, all demonstrating and protesting against the budget law presented by the Government.

On the other hand, workers from health care, schools and post offices were absent. In addition to the national demonstration held in Rome, there were other similar initiatives in Bari, Cagliari, Milan and Palermo.

#Bombardiers: Respect the people who took to the streets: they didn’t want to block the country but get answers from the government@PpBombardieri # Ensure La7

Online communication and sharing do not replace the implementation of solidarity networks, but digital platforms can certainly be very useful for building real mobilizations in the streets. With the artificial intelligence algorithms of KPI6 * we have analyzed the thousands of conversations on the web, and the sentiment or the trend of emotions, obtainable within the contents published on the #strike.
We started talking about #ScioperoGenerale in a consistent way already a few days before the demonstration in the squares, since the beginning of December when the mobilization was announced.

Discussions both on the opportunity to strike, but also on the various economic issues, inherent to the budget maneuver, work and economic recovery. A broad discussion, articulated on the effective value and robustness of the growth of the gross domestic product, on the effects of the covid on the economy and the concrete objectives that the strike can achieve. In fact, conversations often do not include mentions of trade unions. As if the strike had been released by the promoters and in reality it was the pretext to open a broader discussion, on the actions of the Government and the economic prospects.

Among the trade unions, the CGIL is the most mentioned, with values ​​almost identical to those that characterize the Uil, while the CISL has obtained a low volume of visibility within the conversations, despite the clamor caused by the failure to join the strike.

Talking a lot about a social phenomenon or a political protagonist does not necessarily bring positive visibility, in fact the sentiment associated with Cgil and Uil is clearly negative, at 90%. Many dispute the opportunity to strike in a phase considered as delicate as the current one, also in relation to the possible spread of infections and new outbreaks.

The hashtags most associated with the strike are #CGIL and #UIL, while the phrases and words most present in the contents are oriented towards the protection of rights and the development of employment: “Government disagreement”, “failed maneuver”, “Let’s ask for justice” and “sacrosanct strike”. But there are also those who make a favorable voice heard for the executive, in fact, among the conversations, “maneuver fights precariousness” emerges.

Conversations are of another type when associated with the CISL: “Responsibility” and “dialogue” are the words most represented. But a part of the audience defines the choice not to participate in the strike an “incomprehensible choice”, confirming how the idea of ​​seeing the trade union front not compact, still causes disappointment.

The topics related to the strike, which are talked about on the web, can be grouped into five categories:
· Workers
· Dragons and Government
· Budget law
· Pensions and pensioners
Covid and likelihood of contagion

The categories of health risk and new outbreaks are the ones that provoked fewer conversations, while the theme of work and insecurity, in addition to discussions on the Government, are those most populated with user content.

The prevalence of political forces, in general, did not support the strike, although respecting its full legitimacy, and collecting the various ideas for reflections carried out in the squares.

Still hatred from #Salvini against the workers of this country and against the trade unions.
No surprise at his reaction: on the other hand, it is his consultants who are proud when they manage to fire workers and close factories in Italy#General strike pic.twitter.com/1iOJBZMyLP

A strike is respected, always. However, it is better that workers – in deciding whether to join or not – rely on correct information, not propaganda. The quality of our public space is at stake. pic.twitter.com/zepW30icUg

Politics cannot ignore it #general strike, we need a concrete signal for the dignity of workers. On the #minimum salary we ask all parties, starting with the Democratic Party, to break the delay. Stop wasting time: in Parliament there is the proposal of @Mov5Stelle.

Observing the geo-distribution of the conversations throughout the national territory, we note that in Lombardy and Lazio there has been much talk of the strike; much less in the rest of Italy, even in those regions where workers demonstrated, in Bari, Cagliari, Palermo.