The omicron whip hits US supermarkets 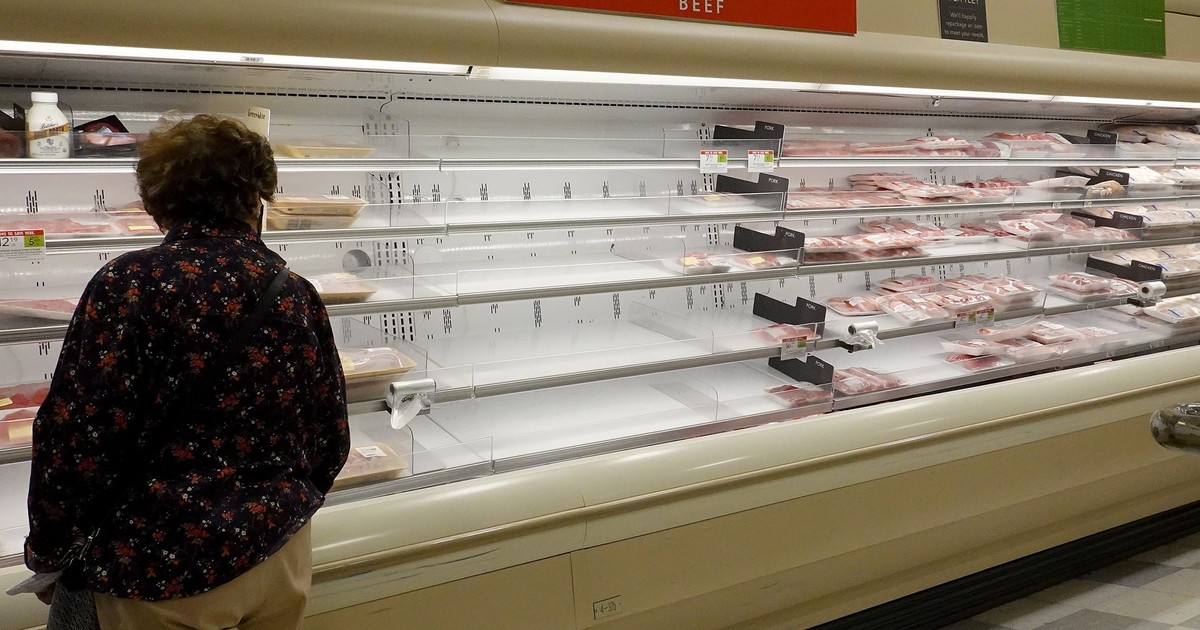 Benjamin Whitely went to a Safeway supermarket in Washington City this week to buy some things for dinner. But he was disappointed when he found empty vegetable shelves and a meager supply of turkey, chicken, and milk.

“Looks like I didn’t find anything,” said 67-year-old Whitely. “Now I’m going to have to look elsewhere,” he resigned himself.

The shortage in US supermarkets worsened in recent weeks after new problems, such as the omicron variant of the coronavirus and bad weather, now add to the problems in the supply chain and labor shortages that have affected retailers since the coronavirus pandemic began.

The shortage is widespread. It impacts vegetables, meats, and packaged items like cereals. And it is being reported nationally.

Food stores in the United States typically have between 5% and 10% out of stock, but right now that rate is around 15%, according to Geoff Freeman, president and CEO of Consumer Brands. Association.

Part of the shortage consumers are seeing on store shelves is due to trends in the pandemic that never abated and have been exacerbated by the omicron variant.

Americans eat more at home than they used to, mostly because offices and some schools remain closed.

The average American household spent $ 144 a week last year on grocery stores, according to the IMF, a food producer and grocery trade organization.

The toilet paper gondola, with almost no products in a Miami supermarket, this Tuesday. Photo: AFP

And one truck driver shortage that began to occur before the pandemic is still a problem.

In October, the American Trucking Association said the country was missing about 80,000 drivers, a record high.

Additionally, cargo shipments remain delayed, affecting everything from imported products to packaging that is manufactured abroad.

Retailers and food producers have been adjusting to those realities since early 2020, when panic buying at the start of the pandemic sent the industry into a tailspin.

Many retailers are keeping more supplies of things like toilet paper, for example, to avoid a serious shortage.

“All parties involved in the supply chain ecosystem have reached a point where they have that manual and are able to overcome that basic level of problems,” said Jessica Dankert, vice president of supply chain for the Leaders Association. of the Retail Industry.

Generally, the system works. Dankert noted that empty shelves were a rare phenomenon in the past 20 months. It’s just that now the additional complications are mounting, he said.

As with the staff of hospitals, schools and offices, the omicron variant, with its record of infections in the country, wreaked havoc in food production lines.

At a grocery store in Washington, the refrigerators are almost empty, too. Photo: AP

Sean Connolly, the president and CEO of Conagra Brands, which produces Birds Eye frozen vegetables, Slim Jim meat snacks and other products, told investors last week that supplies from the company’s plants in the United States will be limited for at least the next month due to absences related to the omicron variant.

The absences of sick workers are also affecting grocery stores.

Stew Leonard Jr. is president and CEO of the Stew Leonard’s grocery chain that operates stores in Connecticut, New York and New Jersey. Last week, 8% of its employees, about 200 people, were sick or in quarantine. Generally, the level of absenteeism is 2%.

A supermarket bakery had so many sick days that it stopped making its usual products. Leonard said meat and vegetable suppliers told him they are also dealing with a worker shortage related to the omicron variant.

However, Leonard said shipments generally arrive on time, and he believes the worst of the pandemic may be over by now.

Meanwhile, weather-related events, from snow storms in the northeastern United States to wildfires in Colorado, also impacted product availability and caused some customers to buy more than usual, exacerbating supply problems caused. for the pandemic.

A sign in a supermarket in Anchorage, Alaska, reports that due to bad weather some products did not arrive. Photo: AP

Lisa DeLima, a spokeswoman for Mom’s Organic Market, an independent grocery store with branches in the central east coast region of the country, said the company’s stores had no products to display last weekend because winter weather stopped. to trucks trying to get from Pennsylvania to Washington.

That bottleneck has now been resolved, DeLima said. From his point of view, the intermittent shortages of certain items that shoppers see now are nothing compared to the more chronic shortages at the beginning of the pandemic.

“People don’t need to panic shopping,” he said. “There are a lot of products. It’s just taking longer to get them from point A to point B.”

Experts are divided on how long grocery shopping will feel like a scavenger hunt.

Dankert believes this is a setback, and that the country will return to normal soon, albeit still with supply chain problems and a labor shortage.

“There will be no prolonged product shortage, just sporadic and isolated incidents, that moment when the supply chain takes a minute to catch up,” he said.

But others are not so optimistic.

Freeman of the Consumer Brands Association said that omicron-related problems could increase as the variant spreads in the north central region of the country, where many large packaged food companies such as Kellogg Co. and General Mills Inc. operate.

He noted that he believes the federal government should do a better job of ensuring food industry workers have access to coronavirus testing.

He would also like there to be unified rules for things like quarantine procedures for vaccinated employees. Right now, he said, companies are grappling with a mix of local regulations.

In the long term, it could take time for grocery stores and companies to figure out customer purchasing patterns that emerge as the pandemic subsides, said Doug Baker, the IMF’s vice president for industrial relations.

Meanwhile, Whitely, the Safeway customer in Washington, said he’s lucky to be retired because he can spend the day browsing for products if the first stores he goes to don’t have them anymore. People who work or care for sick loved ones cannot afford that luxury, he noted.

“Some are trying to get food to survive. I’m just trying to cook a stew,” he said.