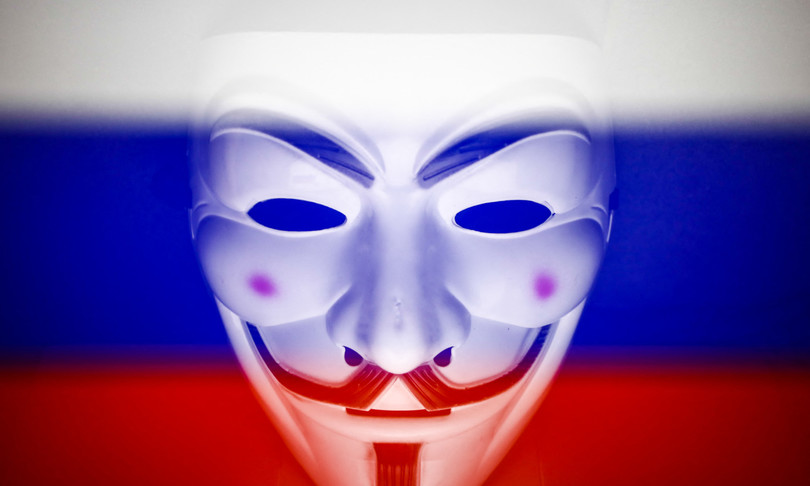 A little less than 24 hours had passed since the entry of Russian tanks into Ukraine when, on the Italian night between 24 and 25 February, Anonymous declared “total cyber war” on Putin. In a video posted on Twitter, the collective speaks to the world through a hooded man with his face covered by the famous Guy Fowks mask. The effect was immediate. Since then coordinated attacks, lone wolves and Twitter claims have multiplied.

An unprecedented mobilization of hackers and cyberactivists from all over the world, ready to defend Ukraine from their keyboards, to try to cause damage of any kind to Russia. a hunt for holes in the Kremlin’s security systems has begun, attacks have multiplied on news sites, state and non-state news agencies, sites of energy giants and small local libraries.

Over 2,000 sites have been affected so far, but the calculation is necessarily approximate: Anonymous does not have an official structure by choice. Anyone can claim on behalf of the collective of cyber attacks. There are tens of thousands of them on the net. In any case, on the real effects of these attacks, on their real usefulness beyond their scenic effect, at the moment there are more question marks than certainties.

Certo, Anonymous has landed blows in their own sensational way during his ‘OpRussia’ operation: on the first, on February 26, he put down the Kremlin and Moscow Defense sites, part of the database of which was released; on March 2, the attack on the site of the Russian space agency, Roscosmos; also the two the collective published documents showing that the Russian attack had been decided on January 18 and a rather detailed map of the invasion; in the past seven days it has made several Russian news outlets and news agencies unreachable, put back on their feet and taken down again, as well as several sites of Russian energy giants, including Gazprom and Lukoil.

But these have always been short-lived attacks. The sites were back on their feet in a few hours. And anyone who trusted the masked hero to stop the invasion of kerosene tanks at the moment can be at least partially disappointed.

APPLES: “WAR IS TOO SERIOUS TO BE CYBER”

“War is too serious a thing to be fought in cyberspace. And therefore today we are seeing all the limits of a cyber war within a real armed conflict, the warring one, the ‘kinetic one, made up of bombs, planes and tanks “. Thus Stefano Mele, lawyer and member of the Italian Atlantic Committee in an interview on the YouTube channel of the IT security expert and CEO of The Fool, Matteo Flora.

“Having a very low real effect, in a state of war, cyberspace has a more tactical connotation. It is not useful to carry out cybernetic operations perhaps aimed at hitting essential services, because you are so involved with the military. The Cyber ​​sphere was actually important for everything that was before the conflict, through propaganda, or attacks on news sites. At the moment it has much less effect “, reasons Mele.

There has been a massive mobilization in the world. Hundreds of hackers, cyberactivists have begun to carry out attacks, to claim the offline government site or a small office in the Ural district. On the net, a great expectation has been created towards Anonymous and the following collective: still on Twitter under each of their tweets there are dozens of comments asking for attacks on some site in particular, someone asks to take control of the tanks , of aviation, perhaps a little too much even for a masked hero.

And if now the effect of a cyber attack seems much more muted than before, it is still true that before the battlefield, the first operations were carried out in the digital sector.

THE WAR IN THE CYBERSPACE

The Slovak experts of Eset Research identified on the evening of February 23, so just before the first Russian troops entered Ukrainian territory, about 200 attacks on the official sites of Ukrainian banks and institutions with hundreds of virus-infected machines capable of “taking the data available from the databases, “tweeted the group’s official account.

At the same time, the civilian satellite internet network operated by the American company Viasat, which covers northern Europe, was the victim of “a cyber attack with tens of thousands of terminals rendered inoperable,” said Michel Friedling, commander of the French space agency. earlier this week. In response, Ukrainian Deputy Prime Minister Mykhailo Fedorov announced on February 26 on Twitter, a channel on which he has been very active since the beginning of the conflict, that he was creating a cyber army of volunteer hackers (“IT Army”).

“There will be missions for everyone!”, He wrote, giving the address of a group on the Telegram messaging service, to which more than 292,697 people quickly joined at the moment, including the famous collective Anonymous. On this group, new targets are regularly shared in Russia and Belarus: official websites, telecommunication power grids, banks or cryptocurrency platforms, even the Glonass satellite positioning system, the Russian equivalent of GPS.

ATTACKS SOMETIMES ‘TO MAKE THEY LAUGH’

The messages of broken sites are multiplying, but it still seems something very different from the dreaded cyberwar. Or at least, there is currently no reason to fear it more than the real effects of a warring conflict. Sure, there’s a lot of emphasis on attacks. According to reports from AFP, who translated some of the channel’s messages, for example Olivier Laurelli, a blogger, writes that he attacked Gazprom’s web infrastructure and managed to broadcast the “heavy metal version of the Ukrainian anthem” on a station. radio of the Russian oil giant, followed by a speech by President Zelensky.

The company had to disconnect the server, “because they no longer had control over it,” he later commented to the agency. “People there don’t know what’s going on in Ukraine,” she said, admitting though that his attack on him was mostly aimed at creating some humor.

What, “When millions of people in city centers are under fire, what are data leaks and paralyzed websites worth?”, for example, journalist Patrick Howell O’Neill asked MIT Technology Review a few days ago.