They invested US$ 1.5 million to produce dairy products with buffalo milk and expand throughout the country 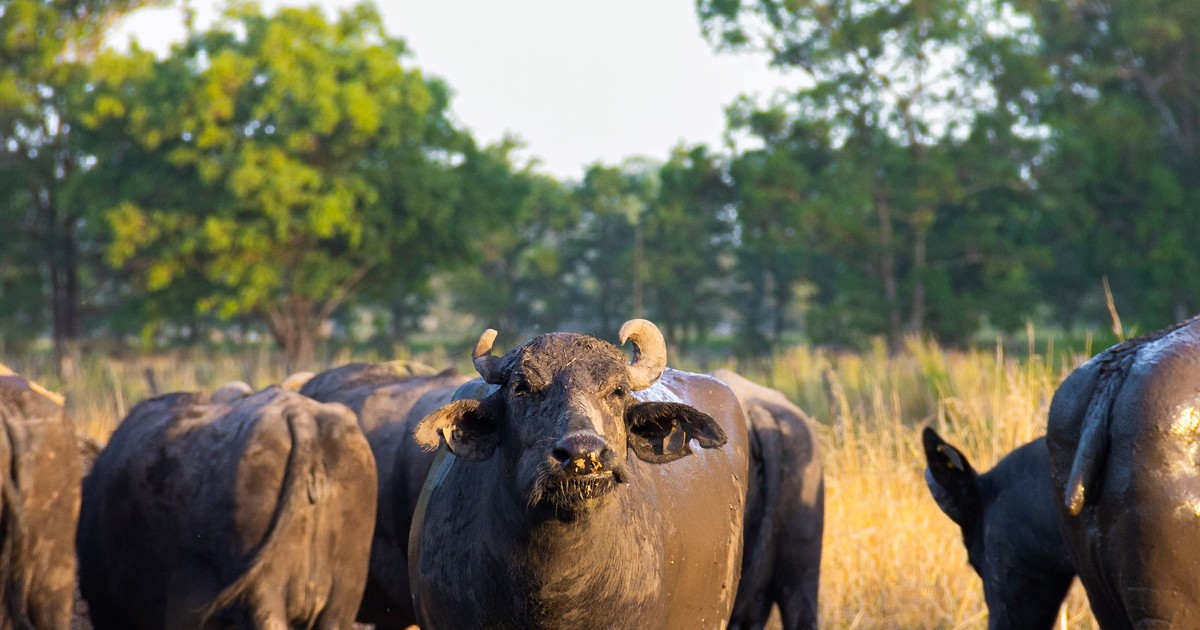 The family business Lácteos La Delfina is located in the Buenos Aires town of Las Flores and 6 years ago began to venture into the production of buffalo milk. Thus, after investing US$ 1.5 million since its inception, it carries out the entire production chain from genetic selection, breeding, feeding its animals, milking in the dairy and the plant where dairy products are produced in a artisan.

The company started in a very incipient way. They ventured with a few buffaloes since it was the first experience in milking this type of animal. They milked 5 buffaloes and currently the rodeo is made up of 120 animals. The buffalo is a long-lived animal, so the replacement rate is low since the animal lives about 20 years and is productive for an average of 15 years.

Carlos Noguera, next to the buffalo rodeo in Las Flores.

At first, they set up a dairy with two milking machines and then they grew. Now they are expanding the facilities to milk 250 animals. “We are increasing between 20% and 30% of production per year,” he said. Carlos Noguerafounder and president of the company, where 4 people work in milking and 4 people in the plant.

But this growth was not by chance. Rather, they prepared themselves in these years by taking courses and traveling abroad to fine-tune productive details.

The plant has 400 square meters and is strategically located very close to the dairy.

In Argentina there are about 220,000 buffalo, a very low figure compared to the 53 million cattle. Today, the buffalo presence occurs in the provinces of Chaco, Formosa, Misiones, Santiago del Estero, San Luis, Salta, Entre Ríos and Corrientes, the main producer of this cattle. But as for dairy, en Argentina there are no less than around 500 buffaloes in production.

“The great complexity is to put together the rodeo. Tame the buffaloes and put them into production. You have to select the best ones and discard the less productive ones, and this takes many years and is expensive,” he explained about one of the challenges of this production.

Except for logistics, the company carries out the entire production chain from the field to the consumer.

For the handling of the buffaloes it is very important not to use dogs or horses, milking, that the buffalo does not suffer stress. “The buffalo is very intelligent and sensitive. Working in animal welfare has mutual benefits, for the animal and for us”, he maintained.

According to what he said, it costs a buffalo a little more than a bovine to handle heat stress. That is why in summer, in the hours of highest temperatures, they have a lagoon where they can cool off, take a siesta in the shade of the mountain; in winter, in the frost season, they are also taken care of because they believe that the more care they receive, the more. “They are treated with great affection”Carlos pointed out.

In addition, one of the points to take into account is the moment in which the buffaloes adapt to the environment, in this case, that of Las Flores, a city almost 200 km from the Autonomous City of Buenos Aires. “It is key that it be in spring or summer so they adapt more to the climate that they came from Formosa, where we brought them from,” he explained.

The feeding of the buffalo herd is similar to that of cattle.

At the same time that they were growing with the rodeo, they were also advancing with the assembly of the plant to give added value to the milk they obtained. Thus, the dairy plant went hand in hand with the project.

They started with a 50-liter vat, then they went on to a 100-liter one and added a small artisanal cheese factory and then they jumped to assembling the plant. From the 120 square meters at the beginning, they grew to 400 square meters after two extensions.

As Carlos explained, buffalo milk contains three times more fat and twice as much solids as bovine milk providing 40% more calories and a higher proportion of proteins and a slightly lower proportion of lactose, being a solution for those who do not tolerate cow’s milk. “At sight it is a whiter, brighter and sweeter milk,” she described.

Buffalo milk dairy products are part of a niche market for high-quality products for the Argentine market. 90% of dairy sales are in AMBA (common urban area that makes up the City of Buenos Aires and 40 municipalities of the Conurbano) and the rest is distributed in tourist areas such as Bariloche, Esquel, Mendoza, Córdoba, Tandil, Mar del Silver, among other places. The channel is through Horeca (Hotels, Restaurants and Caterings or dietary and gourmet stores. In addition, they are promoting e-commerce sales.

In the country there are around 500 buffaloes in production.

“It is produced with fresh milk every day, which gives us good quality products. Except for logistics, we do the entire chain from the field to the client’s house”, he said.

The firm’s production is based on yogurts (firm and shakes), cheeses, semi-hard cheeses, provoleta, mozzarella, cream cheese, dulce de leche and ricotta, among other products.