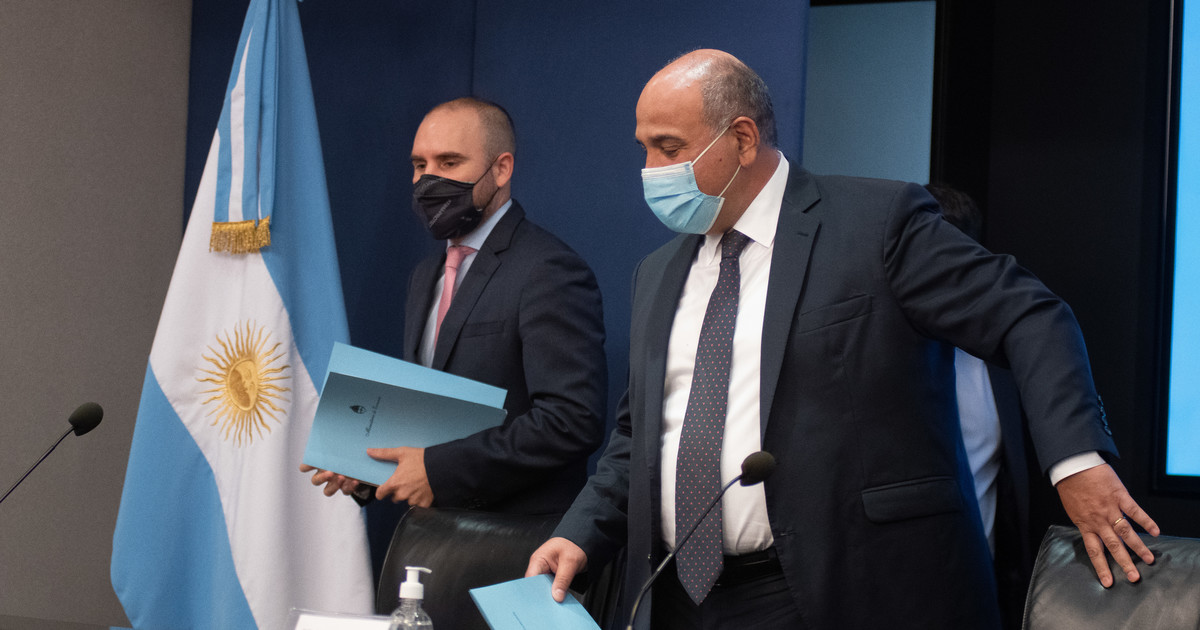 The chief of staff, Juan Manzur, called on the Frente de Todos to put differences aside in the framework of the debate on the project of the agreement with the IMF, which began today in a plenary session of commissions with the presence of Martín Guzmán.

The man from Tucuman was the first to speak. In a speech read before the deputies he warned that “a critical look” at the Fund “is no reason to encourage voting against at this particular juncture.”

“We are in an instance in which we need to give closing this deal to avoid the interruption of Argentina’s commitments with the organization,” he analyzed.

In this sense, he stated that Argentina is “in a situation that calls us to think and act across political divides and, as I said before, with responsibility and a vocation for the future”, he encouraged.

Manzur admitted that Argentina is “facing an objective circumstance: the Argentina does not have the necessary funds to face the maturities of 2022 and 2023″ and evaluated in this context that “our task is to avoid a scenario of generalized default”.

“Again, I ask you haste and support to leave behind this burden that we have inherited and to be able to concentrate on deepening the economic recovery of Argentina”.

💬| @JuanManzurOK: “We need to close this negotiation to avoid the interruption of Argentina’s commitments. We are in a situation that calls us to think and act outside of political divisions and looking to the future.”
#JoiningVoices🇦🇷

Agreement with the IMF: who accompanies Guzmán in Congress

After Manzur’s words, it was time to Guzman’s exhibition before the Budget and Treasury Commission. Also present are the president of the Central Bank, Miguel Pesce; the Secretary of the Treasury, Raúl Rigo, and the Argentine representative before the IMF, Sergio Chodosamong other officials.

Sergio Massa received the Minister of Economy, Martín Guzmán; the chief of staff, Juan Manzur; and the president of the Central Bank, Miguel Pesce, before the presentation before the Budget and Finance committees.

There, the head of the Palacio de Hacienda explained “in detail” the entire agreed program and the policies for the next three years, which is the period of commitments assumed, and which do not imply pension, labor or privatization reforms.

The project that entered Congress on Friday for its treatment is made up of two instruments: the “Memorandum of Economic and Financial Policies” and the “Technical Memorandum of Understanding”.

“These documents are the product of a hard and why not say it, hard process of negotiation and exchange between the National Government and the IMF, led by the President of the Nation and by the Minister of Economy”, Manzur said this afternoon.

For the head of the ministers the agreement Stand By agreed during the macrismo with the IMF “it was a record loan in the history of the International Monetary Fund that, unfortunately had no positive impact one in Argentina”.

💬| @JuanManzurOK: “This congressional approval requirement confers democratic legitimacy to the borrowing process. The project avoids an agreement based on adjustment policies and reforms that remove labor and pension rights.
#JoiningVoices🇦🇷

“The consequences of the indebtedness policy without a counterpart in both public and private investments meant a constant drain of foreign currency abroadforming foreign assets without any commitment to the country’s development,” he criticized.

And he added: “The negative combination between high indebtedness and the consequent devaluation of the peso, obviously triggered another harmful consequence for our economy: inflation.”

Agreement with the IMF: the three errors of the program according to Manzur

The Chief of Staff analyzed in his presentation that the 2018 agreement “started from three errors in its conception”. According to Manzur, he did not propose a restructuring of the unsustainable debt in foreign currency with private creditors; he did not define a regulation scheme for capital flows and conceived of inflation as a purely monetary phenomenon.

“The international organization itself a critical appraisal of this credit in which he recognized the failure of the implemented policies, admitting that none of the objectives that had been set were achieved, both in the economic sphere and in the social and financial dimension”, he recalled.

Agreement with the IMF: the details revealed by Manzur

The man from Tucuman specified that the agreement reached by the Government with the IMF “assumes as a central objective that our country continue on the path of sustainable growth with inclusionavoiding an agreement based on adjustment policies and reforms that remove labor and pension rights”.

From the tax point of viewsaid that he foresees “a path of convergence that does not inhibit the continuity of the recovery, with a moderate expansion of real spending, and where the State will have a key role, defining the central priorities, which will be the pillars of social inclusion, development of science and technology and investment in infrastructure”.

“Fiscal consolidation will be achieved progressively through a balanced package of spending and revenue measures,” he said.

Meanwhile, from the monetary and financial perspective, a gradual and persistent reduction of the monetary assistance provided by the Central Bank to the National Treasury is programmed.

Agreement with the IMF: what does it say about inflation

Manzur stated that in the negotiation process it was possible to “achieve a multicausal approach to the phenomenon of inflation” and advanced that the understanding “allows the development of a strategy that attacks the various factors of inflation concurrently, without limiting ourselves to a single dimension of the trouble”.

“We have, then, to achieve sustained growth in exports that strengthens international reserves; improve the financing profile of public policies and progressively reduce monetary financing, among other elements”, he promised.

Agreement with the IMF: what it says about gas and electricity rates

The Cabinet chief announced that the final stage of the negotiations with the Fund was marked by “the increase in gas and electricity rates.” “It was concluded with rationality, prudence and a sense of justice,” he said.

“Virtuous segmentation, which increases the payment of the sectors that can afford it, but maintains the subsidy scheme for the most vulnerable groups, is an equitable solution that also opens the door to greater investment in the sector,” he added.