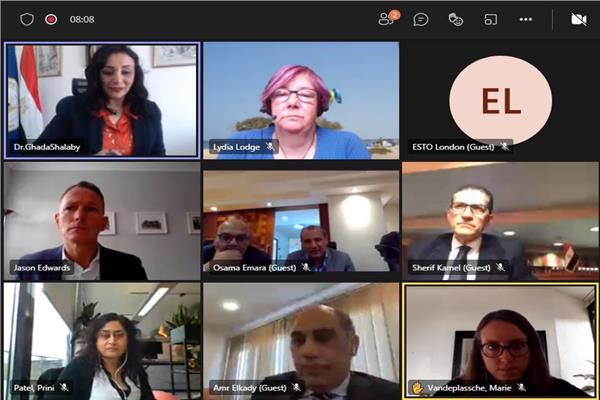 Ghada Shalaby, Deputy Minister of Tourism and Antiquities for Tourism Affairs, participated in a professional meeting via video conference with representatives of the British tourism sector, to discuss ways to increase the tourist movement from the British market to Egypt.

The meeting was attended by Amr El-Qadi, CEO of the Egyptian General Authority for Tourism Activation, Sherif Kamel, Egypt’s ambassador to the United Kingdom, and representatives of the Egyptian Federation of Tourist Chambers, the two rooms of hotel establishments, and travel and tourism companies and agencies.

The Deputy Minister began the meeting by reviewing the diverse and distinct tourist components of the Egyptian destination. She also noted the continued application of precautionary measures in all hotel and tourist establishments, museums, archaeological sites, airports, and various tourist activities, and that the Ministry is following up the implementation of this resolutely and punishes the violating facilities. She also referred to the hotline launched by the ministry to receive complaints, suggestions and inquiries from tourists 24 hours a day.

The Deputy Minister spoke about facilitating the procedures for obtaining entry visas to Egypt, as citizens of 76 countries can obtain the visa electronically from the website designated for that.

She also talked about Egypt’s tourism readiness to host the 27th Conference of the Parties to the United Nations Convention on Climate Change “Cop 27”, which will be held in Sharm El-Sheikh next November, explaining that the conference will highlight Sharm El-Sheikh as a green city and is an opportunity to shed light on the efforts of Egypt to work on preserving the environment and the transition to renewable and clean energy.

She also talked about the major projects undertaken by the state, including the New Administrative Capital, in addition to new cities such as New Alamein, which offer a distinct tourist product throughout the year.

She added that one of the most important promotional means used by the ministry now is the various social networking sites, in addition to inviting bloggers and influencers who enjoy a high follow-up rate on these sites and media representatives on introductory trips to inform them of the various tourist and archaeological elements enjoyed by the Egyptian tourist destination.

For his part, the head of the Egyptian General Authority for Tourism Activation explained that the authority had recently organized a number of introductory trips for a number of bloggers and media professionals, among whom were Britons.

For their part, representatives of the British tourism sector pointed out the importance of the Egyptian tourist destination and their keenness to organize more tourist programs for it, especially in light of the increasing demand for it from British tourists. Suggesting the implementation of joint promotional campaigns to promote Egypt more in Britain.