War and pandemic, the perfect storm 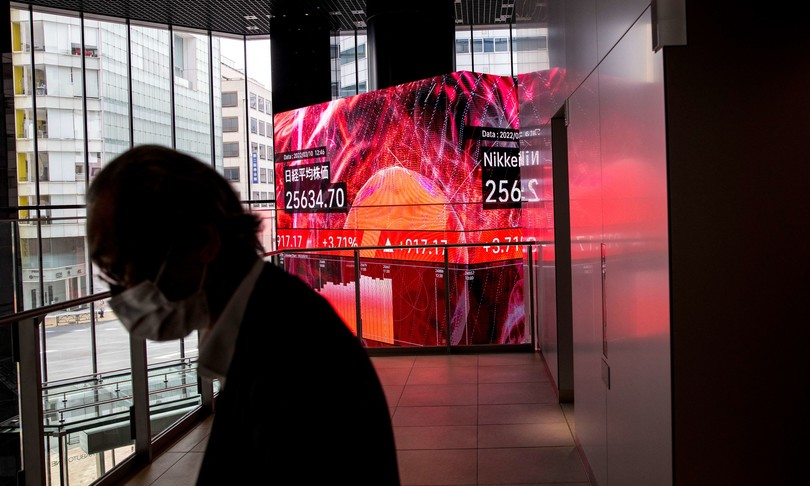 Markets appear to be recovering after five consecutive negative weekly closings, even if Hong Kong is losing more than 5% and Shanghai retreats above 2%, due to the free fall of some tech giants such as Alibaba (-8.5% ) and after the Chinese authorities blocked production and transport activities in China’s Silicon Valley for 66 Covid-positive people 19.

In Shenzhen they had to suspend production of some major Apple suppliers, including Foxconn. Furthermore, Didi’s decision last Friday to suspend preparations for the IPO weighs heavily on Hong Kong’s technologies. Didi, better known as China’s Uber, failed to meet Beijing’s demands for disclosure of its users’ sensitive data. On the other hand, among the Asian markets, Tokyo closed up by 0.58%, in the wake of the decline in the price of oil. Futures on Wall Street and those in Europe are also up.

The markets are hoping for progress in the negotiations on Ukraine, even as the war rages on and Moscow has intensified the bombings on Ukrainian cities, extending them to the west era of Lviv, towards Poland. There is also great anticipation for the Fed meeting, which on Wednesday will initiate the first of a series of rate hikes. The next day it will be up to the Bank of England to raise the cost of money. The central banks of Japan, Indonesia, Taiwan and Russia also meet this week.

On the markets the so-called fear indicators show that at the present stage investors are scared but, at the same time, they tend to warm up immediately as soon as they feel an air of negotiation agreement, of “steps forward”. “This means – comments Cesarano – that, war permitting, and if the Fed does not surprise”, it therefore confirms an initial rise of 0.25% and another 6-7 increases of the same magnitude in 2022, as well as a gradual reduction of the budget, ” we could see some recovery. In short, we are still in a rebound phase. ”

The summit on Ukraine is expected in Rome between the American national security adviser Sullivan and the head of diplomacy of the Chinese Communist Party Yang Jiechi. Meanwhile, the Beijing embassy in Washington makes it known that it “has never heard of” a request for arms made to China by Russia, as stated by US sources quoted by the Financial Times and CNN.

Talks between the Moscow and Kiev delegations resumed today by videoconference, after Moscow has repeatedly hinted at “progress”. Ukrainian Prime Minister Zelensky reiterates his commitment to continue negotiations with Moscow to seek a meeting with Putin. The hope that the negotiations will lead to the reopening of the ports on the Black Sea pushes the prices of wheat and corn down a bit, which have skyrocketed. On the other hand, those of soybeans rise due to a squeeze in Argentina. The price of gold dropped 0.5% to $ 1,975.70 an ounce.

The Fed will begin to hike rates

Next Wednesday, the Federal Reserve will take the stage and start raising interest rates. Markets have already priced an initial quarter-point hike and six to seven moderate hikes over the course of 2022for a total of about 1.75%, in practice an increase every time they meet for the rest of the year (altogether six times) all of 0.25%, except one which could be half a point.

This upside could be placed at some point in the series but the Fed has not yet announced when. Jerome Powell could foreshadow that Wednesday and this would be one of the possible surprises we could expect from him. The other will concern the timing and methods of reducing the Fed’s maxi-budget, which currently amounts to 40% of US GDP. The Fed has already hinted that it will focus on reinvestments rather than asset sales, but on Wednesday it will have to put it down and clarify its position.
Then it’s up to Powell to step in and have his say.

Until now the war did not change his attitude. Joe Biden reconfirmed him at the helm of the US central bank with a specific task: to reduce inflation. And he did not fall short of expectations, he even dusted off Mario Draghi’s ‘Whatever it takes’ several times, ensuring that “we will do whatever it takes” to stop consumer prices.

E to fight inflation, there is only one way: to raise rates. However, Powell knows that he will have to do it with caution, because if he raises rates too much, or does it too quickly, he will end up scaring the markets and clearing the yield curve, that is, he risks making short rates rise more than long ones. expiry, which for the stock exchanges would represent a sign of recession. So he has to act gradually: aim for a soft landing.

How? The answer is a bit technical but basically it sounds like this: we raise rates gradually and at the same time we reduce the balance sheet, but focusing on reinvestments without for now also selling securities. For this Wednesday, the ‘radar’ of the markets will focus above all on the timing and methods of budget reduction, which will be one of the strong points of the Fed’s proposals.

US inflation has not peaked

In short, many of the Fed’s future moves will depend on the trend in US inflation. Consumer prices in February rose to 7.9% last week, the highest in 40 years. However, analysts exclude that US inflation has peaked, so it is set to rise further. How much? “It is not at its peak – comments Cesarano – but we should be close. The data on US inflation in March will be published shortly before Easter, in mid-April. And in March the increases in energy products will still weigh. Currently, the price of gasoline has risen to an all-time high of $ 4.3 per gallon. So it will impact the March data. The peak could arrive that month, or perhaps in April, it should be just above 8% and it will be interesting to observe if already in March-April the ‘core’, that is inflation net of goods, will begin to show some signs of slowing down. energy and food “.

The ECB has become more ‘hawk’, inflation in the crosshairs

Last week the ECB became more ‘hawk’, it decided to act against inflation, in a more ‘soft’ way than the Fed, but in fact it accelerated the reduction of monetary accommodation. In short, Lagarde, like Powell, had to be convinced that inflation must be fought, even if for the euro area the risk of facing stagflation at least a couple of months before the USA increases, because it is at the epicenter of the war and is more dependent than Americans on Russian oil and gas.

“Let’s say that in the ECB the hawks won – comments Cesarano – and he gave the doves the sop of the conditional on the arrest of the Qe”. Lagarde said that purchases will not “be”, but “could” be stopped in the third quarter, if inflation does not go down. “Probably it will not go down and therefore the conditional is in fact a present”. “On rates – he adds – the game will be longer. Now the hawks win and we look more at inflation, but when we see the effects on growth, in the second half of the year, the doves could return to the field. The game is still open”.

Next Thursday, the same day that the Boe announces a new rate hike, it will be interesting to check the positions of the European central bank, because at an event in Frankfurt, the entire ECB staff will speak: the president, Christine Lagarde, the German member of the executive, Isabel Schnabel, the Governor of the Bank of Italy, Ignazio Visco and the chief economist, Philip Lane.

Stagflation is just around the corner

The strong volatility of the markets is linked to the fear that the war events and the upcoming rate hikes could slow down growth without being able to cool inflation. In short, the fearsome stagflation is just around the corner. What does it mean? Let’s say that an economy enters stagflation, when it suffers not only from a lack of growth but also from a sharp rise in prices. “Stagflation – says Antonio Cesarano – in this context becomes an increasingly probable scenario at least for Europe and could subsequently also affect the USA”.

There are all the conditions for entering into stagflation in Europe, where inflation is projected to be above 5% in 2022 and growth is under stress. “Let’s say that stagflation is expected in Europe between the first and second semester and is at least a couple of months late in the United States.” At this stage, Europe is most at risk as it is more affected by rising energy prices, while its autonomy in energy terms protects the United States. The stagflation effect will lead to a severe monetary policy dilemma.

After the almost monothematic focus on inflation a greater balance could follow to also take into account the growth theme in order to restart the economyto. “The ECB will start first – says Cesarano – in a few months it could also be the turn of the Fed, which first, however, could try to start a short phase of rate hike / budget reduction.” To the advantage of the Fed there is also another factor, namely that there are components of inflation that can be reduced by raising interest rates such as rental and car prices “. In Europe, on the other hand, inflation largely depends on expensive energy, a component on which rates have little impact.