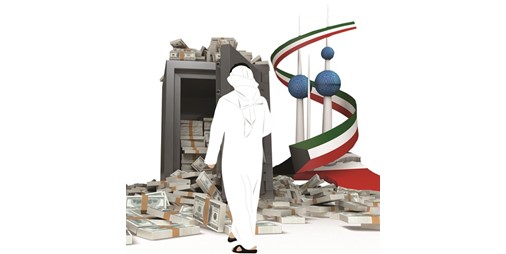 The country’s foreign exchange reserves represent the total cash balances, accounts, bonds, certificates of deposit, treasury bills and foreign currency deposits with the Central Bank of Kuwait. By calculating liquid reserves, we find that they cover Kuwait’s import needs for more than 13 months, which is 4 times more than the global average, as it is considered the safe limit The liquid foreign exchange reserve, not counting gold, should cover 3 months of the average value of imports.

As usual in all previous years, Kuwait’s gold reserves have not changed, which settled at 79 tons, according to the World Gold Reserve Council. The book value of that amount of gold in Kuwait is 31.7 million dinars, according to prices at the time of purchase and not at the current market value.

According to the monthly bulletin of the Central Bank of Kuwait, the bank’s total assets amounted to 12.56 billion dinars, distributed among liquid foreign reserves, which represent the bulk of 12.33 billion dinars, in addition to gold reserves with a value of 31.74 million dinars and other reserves of 201.89 million dinars. Foreign assets measure the strength of the external financial position and capacity To resist the pressures on the local currency.