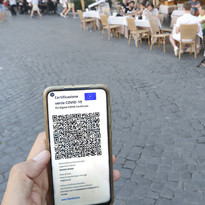 ` – Not everyone convinces, but few shun. The green pass, the vaccination certificate that from 6 August will be mandatory to show to enter, among other things, indoor restaurants and bars, divides Italian public opinion. But few give up: 47% of Italians have already obtained the green pass, while 20% report having started the process to obtain it. However, 21% remain who resist the idea of ​​requiring a vaccination certificate and declare that they do not want to obtain it.

This is what emerges from a survey conducted by Swg for Confesercenti on a double sample of consumers and entrepreneurs in the catering, bar service and other catering businesses, interviewed between 28 July and 2 August 2021.

The introduction of the obligation has split in half in particular the entrepreneurs of bars and restaurants: among these, in fact, the percentage of customers in favor of the green pass is still at 53%.

The practical organization of the obligation also divides: 46% of consumers believe that it is not correct to place the burden of controlling the green pass on restaurateurs, a share that – not surprisingly – rises to 54% among the restaurateurs themselves.

To reinforce the refusal of companies, the specter of having to take on excessive responsibilities: every mistake could have salty consequences, with onerous penalties that go up to the closure of the premises. For this, i60% of the activities ask that also in Italy, as in France, a ‘buffer’ period without sanctions is foreseen to accompany at least the initial phase of the start of the obligation.

The estimate of the economic impact of the green pass also divides. Entrepreneurs are the most pessimistic: 46% fear that the introduction of the obligation will have a negative effect, with an increase in costs for the company and reduction of turnover; while only 29% hope for a positive effect. A negative evaluation also due to the fear of not being able to support the business: 54% of companies, in fact, declare that they do not have enough space for external consumption to keep the company on its feet.

Among consumers, on the other hand, optimism prevails: although there is a 20% who maintain that the green pass will have a negative effect, 37% believe that the vaccination certificate will not change their consumption habits, and a further 35% declare on the contrary, the greater safety offered by the green pass will lead him to eat more often in public establishments.

“The hope”, comments Confesercenti, “is that the obligation of the green pass will be effective in speeding up the vaccination process. As the survey indicates, however, entrepreneurs fear difficulties, especially in the control phase, which effectively transforms them into public safety agents: a role that certainly does not belong to them, a point on which even customers seem to agree. The operators of the sector are at the forefront to make a contribution and raise awareness, but the new obligation must be a responsibility shared by all: better to inform than to sanction. This is why it would be appropriate to start an experimental phase without fines, as was done in France “.