Tesla fires an employee who posted a video of a crash 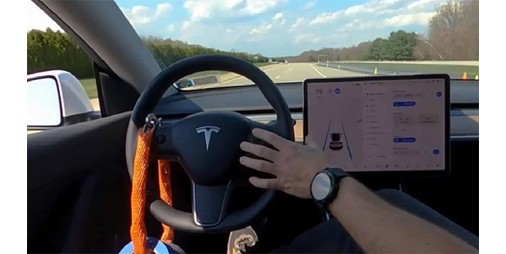 US electric car maker Tesla has fired an employee six days after he posted a video on YouTube in which his Model 3 cars collided with a lamppost while operating its controversial “Full Autonomous Driving” electronic driver assistance system. SD).

And the Bloomberg news agency indicated that John Bernal, who works in the team explaining the data for the driver assistance system “Auto Pilot” for Tesla, received the letter of dismissal from the company on February 11, less than a week after publishing the video, which has so far recorded more than 180 A thousand views.

The 3.5-minute video depicts the Model 3 car veering sharply to the right, heading into a green light pole separating the road and bike lane in downtown San Jose, California, USA.

Bernal, 26, said in a phone call to Bloomberg that while his Tesla boss refused to say why he was fired in the official decision, he told him it was because he used the FSD driver assistance system incorrectly. In January, Tesla said that this beta version of the FSD system is currently working in about 60,000 cars in the United States.

Tesla’s attempts to restrict the sharing of information about FSD beta users had intrigued the US Traffic Safety Administration four months before Tesla fired its employee Bernal.

Last October, the Traffic Safety Department expressed concern over reports that participants in the FSD trial program had been subject to non-disclosure agreements with Tesla, which prevented the detection of any defects or negative aspects of the system.