Technology as a possibility of inclusion for women with disabilities 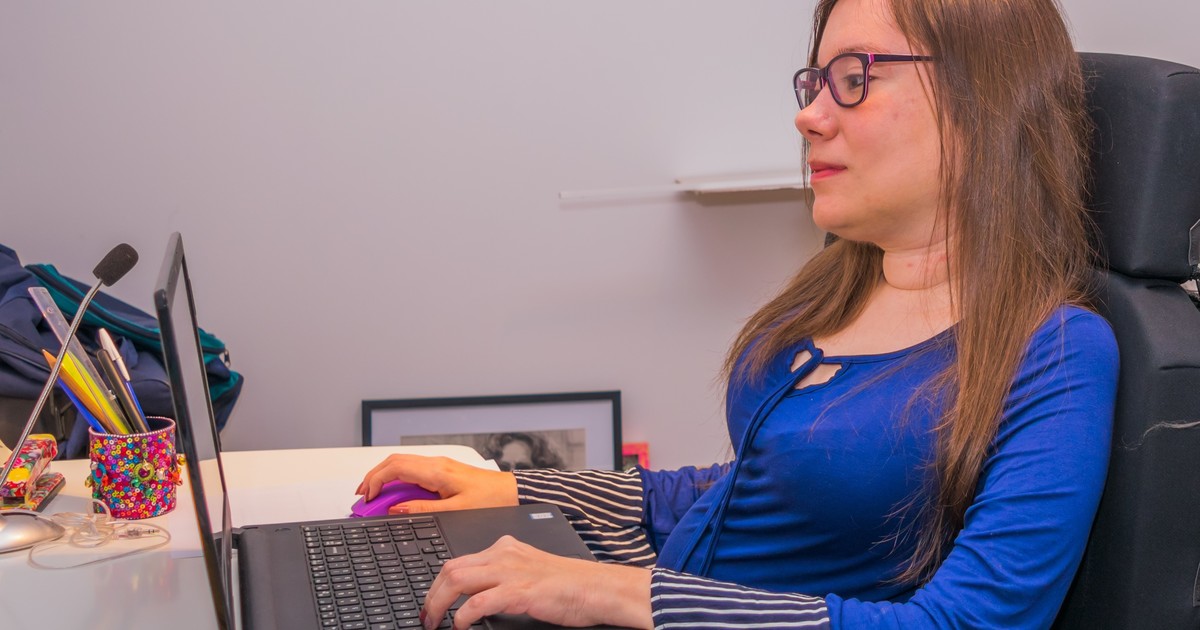 “Yesterday I was trapped at the Acoyte station because the elevator wasn’t working. I went to Primera Junta and couldn’t get out. I ended up going through Puan and then 20 blocks on foot to get to my destination. It took me 2 hours instead of 30 minutes. What I know it says a typical day in the life of a cripple“.

The tweet signed by “Valeria Hot Wheels” illustrates very well the multiple barriers that Valeria Rocha Bartaburu, a computer engineering student at the UBA who has been working at Despegar since 2018 and is a volunteer at the Itgrarte Foundation, faces on a daily basis.

Yesterday I was trapped in the Acoyte station because the elevator was not working. I went to Primera Junta and couldn’t get out. I ended up leaving through Puan and then 20 blocks on foot to reach the destination. Afternoon 2 hours instead of 30 min.
What is said a normal day in the life of a cripple.

Valeria has spinal muscular atrophy, so she uses a wheelchair. But public transportation is not the only obstacle she has encountered throughout her 33 years. When she entered college to study computer science, she discovered that the only adapted bathroom was inside the boys’ bathroom.

“We are very few women in the race: the first years there were only two of us,” says Valeria. “And there weren’t any other disabled women on the rest of the faculty.”

Entering the world of work also involved complications. Valeria sent her CV to a company that had a program to employ people with disabilities.

“They contacted me, they wanted to have an interview. My intention was to work 6 hours, because between the faculty, work and transfers, it was difficult for me to do it full time. They told me they didn’t have those kinds of positions and I was shocked. I had a specific program, but they were not adapted to what an employee perhaps needs with disabilities,” he observes.

Finally, he applied to Despegar’s Jovenes de Alto Vuelo program. “I did not put anything related to disability in the CV. I warned in the interviews that I had a motor disability, more than anything to find out if the office was adapted. And they told me that there was no problem,” says Valeria.

“All the interviews were normal. Just in the last one, prior to admission, they asked me if I needed any adaptation for the job. But being a large company, everything was already adapted. It was paradise,” he says.

Three out of four people with disabilities are unemployed. Photo: Shutterstock

The truth is that, although technology is a gateway to work and can be a facilitator for people with disabilities, “there is a lack of training with an accessibility perspective“, Valeria points out. For this reason, in 2020, she began working with itegrarte, a foundation that offers technology training with that perspective. “I teach introductory classes to programming with Python,” she says.

In Argentina, around 10% of the population (more than 3.5 million people over 6 years of age, according to INDEC data from 2018) have some form of disability. In the world, there are more than a billion: 15% of the global population, according to the WHO.

“People with disabilities find more barriers to access to employment and educationwhich is why they are underrepresented in the world of work,” says Clara Popeo, regional project manager at Inclusame.com.

Today, the inclume.com database has 220,000 people registered. In addition, they work with some 500 companies throughout the region. “We train them in the development of a inclusive culture and we help them connect with people with disabilities who are looking for a job,” says its founder, Gabriel Marcolongo.

In order to include people with disabilities, what is needed is “knowledge, knowledge, knowledge,” Marcolongo emphasizes. Many companies start by saying “I want to start doing”. First, you have to understand why are you doing it, where are you and where do you want to go. Have a diagnosis,” she assures.

There is a lack of training with an accessibility perspective for people with disabilities. Photo: Bloomberg.

In the case of the so-called STEM (science, technology, engineering and mathematics) careers, women in general are already underrepresented. “This problem is doubly influential when we talk about women with disabilities. They face more barriers to employment than men with disabilities“, They assure from Include me.

As part of a Google initiative, Include Me was posted to train 600 women in STEM areas and connect them with companies or develop as Freelance through the Workana platform. “It’s about generating employability by providing them with the skills that this market is looking for to try to promote employment,” Marcolongo describes.

For that, they are working on a diagnosis that allows them to advance on the training of women. “We want to know what is the situation of women with disabilities what are the additional barriers and what would they need to sign up,” says Popeo.

The company had already been working on training. During the past year trained 1,600 students in technological areas. Together with the UTN, they offered courses on community manager, Full Stack developer, digital graphic design, virtual assistant, software testing, user support and telecommuting.

Improving accessibility is a pending account to promote inclusion. The Argentine company Nahual IT, for example, provides public and private organizations with Accessibility Testing services. “This makes it possible to guarantee that mobile applications and web content are accessible to all people, regardless of their physical, sociocultural, etc. conditions,” they point out from the company.

They not only perform these tests, but involve people with disabilities in testing processes (10% of its employees) “as invaluable experience of the development process”. In 2019, it provided the first Testing course for people with visual disabilities and continues with the training.