Dollarization and the dream of issuing foreign currency, in the negotiations between Menem and the US. 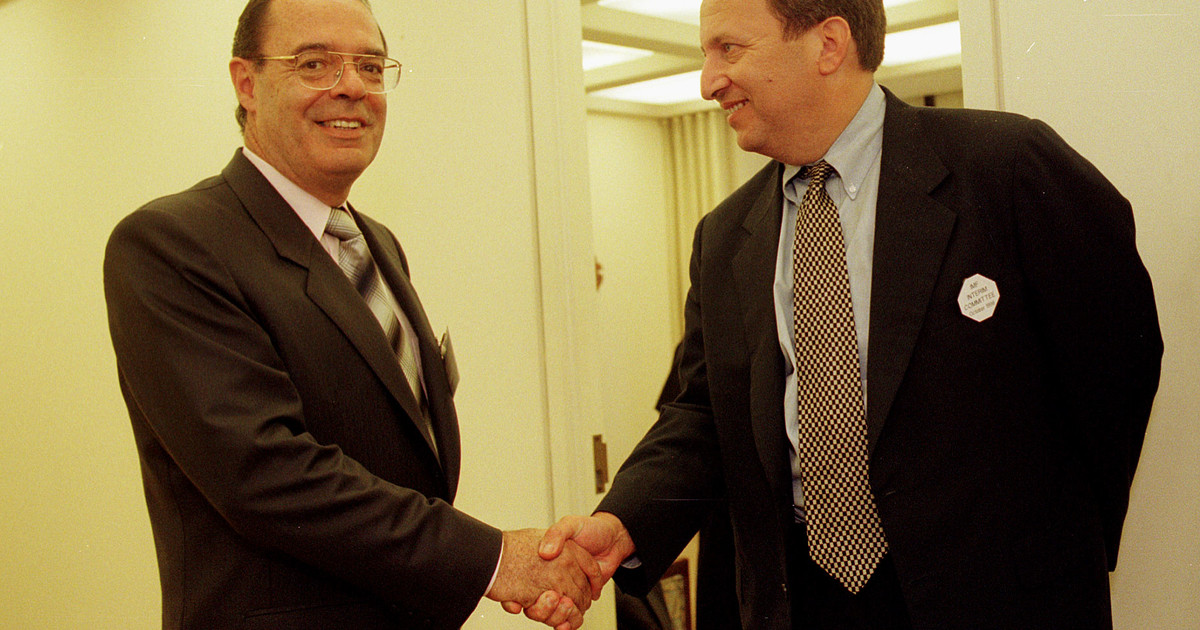 The debate on dollarization grows in Argentinatitled on page two of the Business section The New York Times on December 28, 1989.

President Carlos Menem had a clear direction for the economy. But not that of inflation. The monthly rate in December had been 40.1%. And in the first quarter it accumulated 466%.

The Ministry of Economy was open to hearing proposals. His minister, Erman González, told The New York Times: “From a technical point of view there would be nothing wrong with dollarization”. But three days later he announced the Plan Bonex: Fixed-term depositors in banks would receive a bond in dollars issued under foreign law and payable over 10 years.

Roque Fernández, Minister of the Economy and Pablo Guidotti, Secretary of the Treasury, at the IMF in 1998.

The word dollarization was heard again in the corridors of Economy eight years later.

“The issue was present from a theoretical point of view first,” says Roque Fernández in relation to González’s statements in The New York Times. “In 1998 it was treated more seriously because Larry Summers, US Undersecretary of the Treasury under Bill Clinton, enabled formal discussions to see if we wanted to study its implementation. and we did”.

Fernández knows both periods well. He was Vice President of the Central Bank in 1989 and Minister of Economy in 1998.

The technical work of dollarization with the US Treasury in the 1990s was carried out by Pedro Pou, president of the Central Bank, and Pablo Guidotti, Fernández’s secretary of the Treasury.

Roque Fernández and Pedro Pou with Larry Summers, in 1998. The American who would later become Secretary of the Treasury gave the green light to discuss dollarization in Argentina.

Why had Economy thought of dollarization if inflation had been defeated with convertibility?

“We had passed Tequila, the impact of the Asian crisis and convertibility was a very rigid scheme to face a new shock like the one in 2001,” recalls Miguel Kiguel, then Fernández’s chief adviser. “We thought that between devaluing and dollarizing, the latter would be better.”

Argentina’s formal presentation to the Treasury to dollarize its economy happened in 1998. Guidotti and Andrew Powell, a British economist who was then working at the Central Bank (now at the IDB), drew up a plan. An administrative decision by the Treasury gave the green light for the job swap.

The discussion between Argentine and US economists focused on two points: how much the US had to pay Argentina to compensate for the inflation of the dollar in one year (seignorage) and the authorization of a special window to go to the country in a crisis situation and have the Reserve as a lender of last resort in a bank run.

With respect to First pointthe Argentine technicians had calculated that Washington would have to return US$700 million annually as seigniorage, which would be invested in Triple A bonds.

Summers asked José Luis Machinea, Economy Minister of the Alliance in 1999, if he was planning to dollarize as he had discussed with his predecessor.

The second point It was more difficult to solve.

Summers had been enthusiastic about the idea at first. It was in line with a proposal he had drawn up while chief economist at the World Bank several years earlier. He also reacted similarly to Alan Greenspan, the chairman of the Federal Reserve.

Summers himself was skeptical that the US Congress would consider signing such a thing. Paul Volcker, former president of the Federal Reserve, told Roque Fernández, then Minister of the Economy, that such a project would never be approved by Washington for a simple reason: The US would never agree to play the role of supervisor of Argentine banks and be a lender of last resort.

In the midst of the comings and goings there was room for one last fantasy. The Federal Reserve is a system of twelve banks established in different states that regulate financial entities in those areas. Fernández thought that if the US gave the green light to dollarization and paid the seigniorage, a bank with dollars had to be established in Argentina.

“I remember Paul Volcker, the former Fed chief with whom I talked about it, pulled out a bill one day and showed me that every dollar mentions where it was issued. And I told him that there had to be something similar for Argentina”.

In the economic team there were members more in favor of dollarization and others less. “Guidotti was more convinced. poo too”Fernandez recalls. “Even I back then was more in favor, today I would be against”Kiguel admits.

“Menem did not reject the idea, he listened and looked”Fernandez says.

In the end, the dollarization project was shelved.

When Fernando de la Rúa arrived, Larry Summers had been promoted to Secretary of the Treasury. The American asked José Luis Machinea, the Alliance’s economy minister, if he was planning to take up the initiative of his predecessors. “We do not have the conviction to dollarize”, replied the Argentine. Both were walking through the Plaza de Mayo, leaving a meeting at the Casa Rosada.