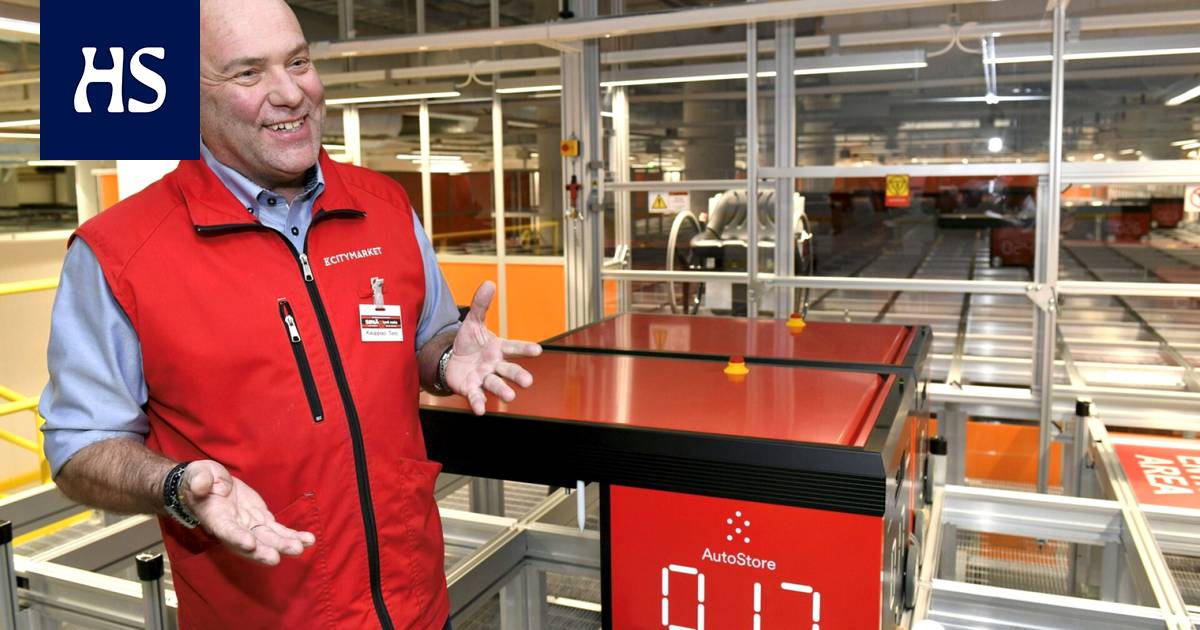 You can soon buy food collected by the robot in Ruoholahti, Helsinki. However, the investment, which cost about ten million euros, will not reduce the need for manpower, at least for the time being.

Previously Children roared in the fifth basement of the Ruoholahti shopping center. Now, on the premises of the former Hoplop, robots weighing 145 kilograms are roaring, cooling up to 11 kilometers per hour over a large metal frame.

Robots are a sign of a revolution in the grocery trade. They have come to the rescue of Ruoholahti’s K-Citymarket online store from the growing demand, which the store is having difficulty meeting.

E-commerce already accounts for about 20 percent of Ruoholahti’s sales. The corridors have the busiest up to 100 employees collecting customers ’online purchases. It is already starting to bother visitors to the cobblestone shop.

Heavy but fast collecting robots play a kind of Tetris in the collecting frame. The robot digs the desired box out of the frame by moving the upper boxes away from it, and then transports the box to the human collector. Picture: Heikki Saukkomaa / Lehtikuva

Ruoholahti Merchant of K-Citymarket Tero Huhtala expects the system to double e-commerce sales in a few years. The system significantly increases the trade’s capacity to sell goods: it is as if it is a trade within a trade.

However, the robot chamber has not come to replace the stone foot trade.

“I see this as a comprehensive service, which means developing both the store and the online store at the same time,” says Huhtala.

The Ruoholahti collection system cost about ten million euros. Kesko has built the framework, and the retailer pays as if it is renting to use it.

The energy efficient system is: one robot has a power of only about 100 watts.

“The toaster consumes as much energy as ten robots,” says the project manager introducing the system Jussi Hytönen.

I eat e-commerce is a fast growing and highly competitive industry.

The change has been in its infancy for some time, but the corona pandemic accelerated development considerably. A huge order was created for a contactless visit to the store. The industry has taken great strides in a couple of years.

Something about the change is the fact that in the K-Group, e-commerce grew by 448 per cent from 2019 to 2021. Similar figures are given by the competitor S-Group: growth was 460 per cent.

The competition is intensified by the Norwegian online food store Oda, which started operations in Finland in January.

Kesko’s Vice President, Grocery Ari Akseli believes that everything has to be available, from store – made sushi to baked goods.

“The purpose of e-commerce is to save the customer time. If you don’t get everything you want from an online store at once, but you also have to go to a stone shop, then that purpose is not fulfilled, ”says Akseli.

Ari Akseli (front), Vice President, Grocery, sees the future as a symbiosis of stone-foot shops and e-commerce. Of the K-Group’s 1,200 stores, about 500 are already covered by e-commerce. Picture: Heikki Saukkomaa / Lehtikuva

Automation is a growing trend in the world. U.S. retail giant Walmart is now filling its storage facilities with MFC systems.

Amazon has also entered the food business. It already had distribution centers in order, but realized it needed traditional stores to cope. That’s why Amazon bought the Whole Foods chain as its cornerstone.

In the past, the trend in the trade sector has shifted towards large central warehouses located somewhere on the outskirts of cities. The K-Group’s choice, on the other hand, emphasizes locality: the pilot centered on the most important place where the volume of e-commerce was already large and where transport journeys are short.

The radius of the home delivery from Ruoholahti is only about five kilometers. For example, people on Vuosaari cannot order food collected by robots at home.

According to Aksel, the recipe for the most efficient store visit is automation combined with pick-up.

“Customers rarely have time on call at home waiting for delivery, but many people want to grab their purchases even when they leave work,” says Akseli.

The K-Group is also developing express deliveries at convenience stores, ie fast home delivery of small purchases. The goal would be to bring coffee milk to the door in less than an hour.

Stone foot trade e-commerce is hardly crowded out. In London, where the online food store is already commonplace, it accounts for about ten per cent of total sales.

According to a survey by the K-Group, about 60 per cent of Finns believe that they will use e-commerce in food shopping at least every five years.

However, only two percent believed they would only shop online.

Ruoholahti the robots took their first shots on Tuesday. The next three months will be spent honing the system. In reality, those 45 robots will get to work in June.

Robots at least they don’t take people’s work yet. According to the retailer Huhtala, the Ruoholahti store employs about 50 people, and their workforce will continue to be needed.

In this system, too, all products pass the human eye. First, a person feeds products into a robot frame, such as a box of black pepper. A box is left in the system waiting for an order with black pepper to enter the system.

In a couple of seconds, there is already a new box in front of the collector with the next product the customer needs. The system allows one person to collect up to 400-600 products per hour. It accounts for about 60-70% of the volume of online purchases.

Along the way, the system checks several times that the customer is getting the products they want.

The collection system in the basement of the Ruoholahti shopping center can be further expanded. Picture: Heikki Saukkomaa / Lehtikuva

Robot thus saving the collector’s feet and time when you don’t have to look for the desired product on the shelf in a huge store.

Not all products should be fed into the frame. Day-to-day service products, such as sushi, or specialty products with low sales are still being collected from store shelves. Banana-like products with high sales volumes are picked up from the pulp collection area.

In small convenience stores, collecting products directly from the shelves is quick and easy. So it’s not worth taking robots everywhere.

The K-Group sees the use of the system in the Helsinki metropolitan area and in growth centers. The group estimates that it will invest tens of millions more in the automation of collection in the next few years.

This automation system is easy to scale to different sized movements and different types of spaces.

Today, the logistics in the industry are so efficient that in many stores the storage facilities are partially empty. They could have room for a few robots.

Read more: HS compared food online stores: One outperformed others in the price of purchases, but shipping charges changed the situation

Read more: The K and S Group are preparing for the entry of Norwegian competitor Oda by developing their own collection lines

Read more: Norwegian online food store comes to Finland and challenges K-store: “In no country do these players compete on the price of products,” says the K-Group