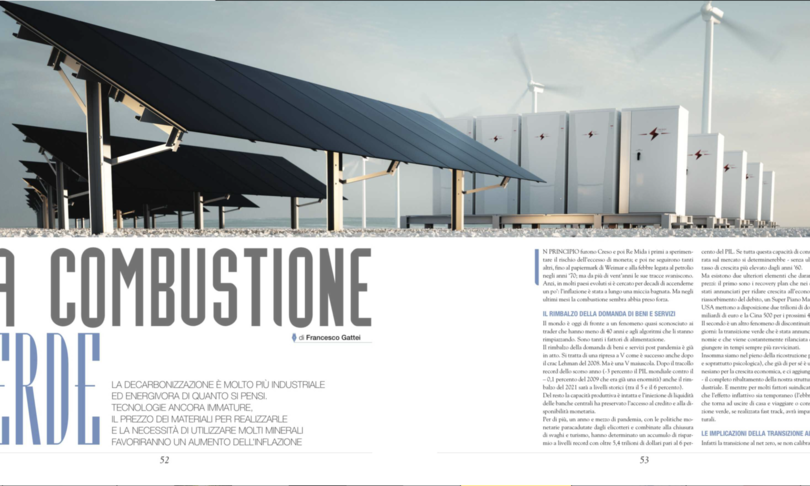 In the beginning it was Croesus and then King Midas who were the first to experience the risk of excess money; and then many others followed, up to the Weimar papiermark and the oil fever in the 1970s; but for more than twenty years its traces have disappeared.

Indeed, many developed countries have tried for decades to light some of it: inflation has long been a wet fuse. But in recent months, the combustion seems to have gained momentum.

The rebound in demand for goods and services

The world today is faced with a phenomenon almost unknown to traders under 40 and the algorithms that are replacing them. There are many power factors.

The rebound in post.pandemic demand for goods and services is already underway. It is a V.shaped recovery as it also happened after the Lehman crash of 2008. But it is a capital V. After last year’s record collapse (.3 percent world GDP versus .0.1 percent in 2009 which was already a huge amount), the 2021 rebound will also be at historic levels (between 5 and 6 percent).

Moreover, the productive capacity is intact and the liquidity injection of the central banks has preserved access to credit and monetary availability.

Furthermore, a year and a half of pandemic, with monetary policies parachuting from helicopters and combined with the closure of leisure and tourism, have resulted in a record accumulation of savings with over 5.4 trillion dollars equal to 6 percent of GDP. – If all this consumption capacity were released on the market, it would result – without further stimulus – the highest growth rate since the 1960s.

But there are two further elements that will boost prices: the first is the recovery plans that have been announced in different countries to restore growth to the economy and facilitate debt absorption, a global Super Marshall Plan. The US provides two trillion dollars, Europe 750 billion euros and China 500 for the next 4 years.

The second is another phenomenon of discontinuity, typical of our days: the green transition which has been announced in many economies and which is constantly being relaunched with targets to be reached in ever shorter times.

In short, we are in the midst of post.war reconstruction (also and above all psychological), which in itself is a good Keynesian doping for economic growth, and we add – boldly – the complete overturning of our energy and industrial structure. And while for many factors mentioned above it can be assumed that the inflationary effect is temporary (the intoxication of a people who returns to leave their homes and travel or consume), a green revolution, if fast tracked, will have structural inflationary impacts.

The implications of the transition to net zero

In fact, the transition to net zero, if not calibrated, would overturn in thirty years the supply chain, transport and energy and industrial consumption, the private demand – both domestic and mobile – that we have settled in 250 years. New sources, engines, vehicles, storage tools, new networks with different injection nodes, a new almost unprecedented energy vector (hydrogen). And many more materials and minerals to be able to make it. The cost implications would be numerous.

The first risk lies in the pressure on the price of the materials needed to build the new technologies. In fact, green energy hides much more materiality in the construction phase than one might imagine.

Consider, for example, the wind and solar plants that according to the IEA, in its Net Zero scenario, are expected to grow – in terms of capacity from 1,500 GW today to 8,000 GW by 2030 (at an average growth rate of 17 percent per year).

The construction of a 100 MW wind farm requires 30,000 tons of iron ore (the equivalent of 4 Eiffel towers), 50,000 tons of concrete and (sic!) 900 tons of plastic and resins. For solar of a similar size the component of iron and steel triples while the quantity of cement is halved. These are all new uses that would add to the traditional use of these materials. In the last decade alone, the amount of minerals for a new.capacity MegaWatt has increased by 50 percent, as the weight of the power green progressively increases. Producing the new involves building the old way.

Then there is the further effect on the construction of the transport and storage network of new technologies: the integration of intermittent sources in the electrical systems, or the penetration of new energy carriers such as hydrogen, requires new transmission networks. It is estimated that in the world there are gas pipelines for 1 million kilometers, while for oil the length of the network is shorter because the crude oil travels mostly by ship. But new electricity, hydrogen and carbon harvesting grids will have to be built because we could only partially reuse the existing web. Green production sites are far from cities (and increasingly offshore) and electricity and new molecules (hydrogen or carbon to be stored) do not share the same modes of transport as old hydrocarbons. In short, for every thousands of kilometers of new pipelines, we have a thousand tons of steel demand for piping. Or tons of copper for power lines.

To this we must add gigafactory for the construction of batteries (Tesla’s in Nevada is the largest industrial site in the world and the IEA requires 20 new ones per year in the decade), energy storage or electrolysers. All new, and all physically demanding.

A third element of inflation lies within the earth’s crust and derives from the magic of the electrical world: they are the minerals necessary for the generation or storage of electrons.

With fossil sources, the energy we use is molecular (it is released by burning and breaking chemical bonds), deposited underground, 2.5 kilometers deep when we talk about hydrocarbons. It’s stock energy. It is captured with the equivalent of a straw (sometimes foldable like that of cocktails) but it does not involve intense mining activity if we talk about crude oil and gas.

With renewable sources, energy is instead a flow of electrons to be captured and used on the fly. After the moment, we return to energetic stillness. But wind and sun are used to generate an electric field only thanks to the magnetic properties of some minerals. These are 17 elements of the periodic table (the very unknown lanthanides and the as many unknown scandium and yttrium) that we have been using massively for a few decades.

To this, we add lithium, cobalt, manganese, nickel, graphite and copper and we have the framework of what we need to create the electrical flow and to store it in batteries.

They are called critical or rare minerals, but they are not rare. They become so because they are inside conglomerates of rocks (not like coal, which is a more concentrated deposit) and arise from highly impacting mining processes and therefore limited to a few areas of the world. Do you want a kilo of vanadium? You have to work 8 tons of rock; for a kilo of gallium it takes 50 and for lutetium as much as 200 tons. And to work means to mine the soil and “refine” the rocks with solvents in several washing cycles.

If oil has a geographic concentration in one region, China is the rare earth Middle East with two thirds of world production.

Electric machines are the most tangible example of this nineteenth.century materiality of the new energy world: by combining electric motors and highly digitized instruments, an EV (electric vehicle, from electriv vehicle) is in fact a concentrate of critical minerals: 200 kg of its weight are minerals necessary for the battery, its protection and magnetic magic that makes it silent and zero emissions (if of course we neglect the noise and emissions of the activity upstream of its production chain). This is a quantity equal to six times that present in traditional cars. Even in wind or solar plants there is between 8.4 times the minerals present in gas plants of similar size.

These minerals are also present in large part in our electronic products, in electrical networks, in household appliances and therefore the effect of an inflationary pressure for the production of these materials would fall on many consumer sectors.

Finally, we have a traditional energy structure that will gradually become tense due to the lack of long.term investments in sources that today account for 80 percent of final consumption. The prospect of a radical change in the energy system already actually produces a transition. Investing in coal, oil and perhaps gas is perceived as potentially at risk and the time return on investment must become faster.

But it is a complex balance, especially if production has a natural decline. For example, between 7.10 percent for crude oil or 4.5 percent for gas. In short, working with just.in.time for fossil fuels could become an impractical equation and, suddenly, we may find that supply is falling faster than demand is actually being displaced by new sources. With a cascading effect on industrial processes, on the cost of transport and on final goods.

And this would push up the cost of the transition which, as mentioned, is much more industrial and energy.intensive than you think.

Some observers have already grasped the connection: “It will be a surprise after thirty years of uninterrupted descent. And it may come as a shock to many. If our only solution is to create a green world, we will have even greater inflation because we don’t have the technologies yet. At some point it will become a political question: will we accept higher inflation to accelerate the energy transformation? ”.

It is Larry Fink, CEO of Blackrock – the largest investment fund in the world – who expresses a link that many pretend to ignore.

In short, after years of trying we have perhaps found the fuel to ignite inflation. It is green and apparently produces no emissions.

* Francesco Gattei is Eni’s Chief Financial Officer. Previously he was Eni’s Director of Upstream Americas, Eni’s Vice President of Strategic Options & Investor Relations and, before that, he was in charge of the portfolio of Eni’s E&P division.– Article published in the July 2021 issue of We World Eenergy

“WE World Energy is the international magazine on the world of energy published by Eni – directed by Mario Sechi – which with its wealth of experience and science has earned a position of great importance in the international panorama of the sector media”.