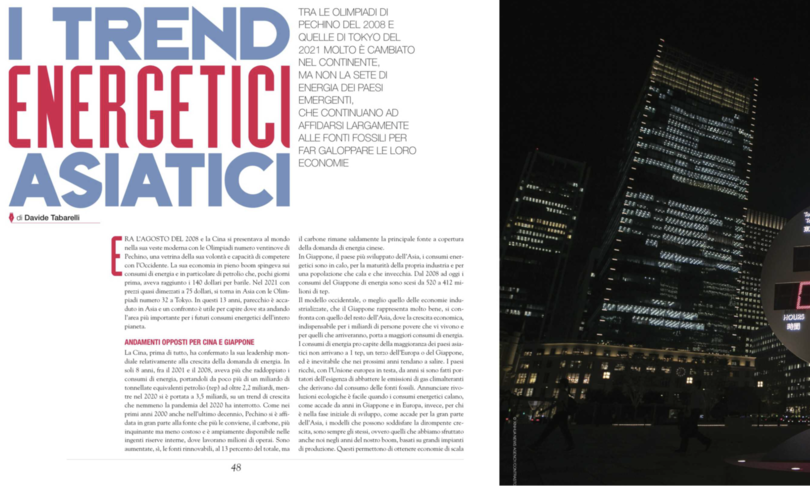 It was August 2008 and China presented itself to the world in its modern guise with the twenty.nine Olympics in Beijing, a showcase of its will and ability to compete with the West. Its booming economy pushed the consumption of energy and in particular of oil which, a few days earlier, had reached 140 dollars per barrel. In 2021 with prices almost halved to 75 dollars, we return to Asia with the 32nd Olympics in Tokyo. In these 13 years, a lot has happened in Asia and a comparison is useful to understand where the most important area for future energy consumption of the entire planet is going.

Opposite trends for China and Japan

China, first of all, confirmed its world leadership in terms of the growth in energy demand. In just 8 years, between 2001 and 2008, it had more than doubled its energy consumption, bringing it from just over a billion tons of oil equivalent (toe) to over 2.2 billion, while in 2020 it reached 3 , 5 billion, on a growth trend that not even the 2020 pandemic has interrupted. As in the early 2000s, even in the last decade, Beijing has largely relied on the source that is most convenient for it, coal, which is more polluting but less expensive and is widely available in the huge internal reserves, where millions of workers work. Yes, renewable sources have increased, to 13 percent of the total, but coal remains firmly the main source to cover Chinese energy demand.

In Japan, the most developed country in Asia, energy consumption is falling, due to the maturity of its industry and a shrinking and aging population. Since 2008, Japan’s energy consumption has fallen from 520 to 412 million toe.

The Western model, or rather that of the industrialized economies, which Japan represents very well, compares with that of the rest of Asia, where economic growth, indispensable for the billions of poor people who live there and for those who will arrive, leads to higher energy consumption. The per capita energy consumption of the majority of Asian countries does not reach 1 toe, one third of Europe or Japan, and it is inevitable that they will tend to rise in the coming years. The rich countries, with the European Union in the lead, have for years been the bearers of the need to reduce the emissions of greenhouse gases that derive from the consumption of fossil fuels. Announcing ecological revolutions is easy when energy consumption falls, as has been the case for years in Japan and in Europe, however, for those in the initial phase of development, as is the case for most of Asia, the models that can satisfy the disruptive growth , they are always the same, that is the ones that we too have exploited in the years of our boom, based on large production plants. These allow for economies of scale to have low unit costs and to cascade downstream energy, first with gigantic transmission systems, then with retail distribution systems.

The case of electricity and the Asian lesson

The typical case is that of electricity and it is also the most interesting one because, on the one hand, it involves the attempt to abandon coal, the most polluting source, and on the other, because it is here that new renewable sources can take off, those that everyone would like more widespread, photovoltaics and wind.

What has happened in the last 13 years in Asia clearly confirms that the models for producing and distributing electricity are always those, which some can call traditional, and that they cannot change much. They can become more efficient, see new cleaner technologies applied, even with the contribution of distributed production from renewable sources, but the substance does not change. It is the large power plants, which in Asia run mainly on coal, which make it possible to meet the demand for electricity and make billions of people feel better. Other large generation plants rely on gas, mostly imported, and also on nuclear power, while the large renewable source, hydroelectric, plays an important role, but with the problem that, like other renewables, it requires huge surfaces. – From large production plants, electricity is distributed in cascade in the transmission system, the large pylons, arrives at the dispatching stations, those where the smaller power lines are attached to arrive in urban centers, or in rural areas, and from there they connect to small distribution networks, which reach homes or factories. The principle is that upstream there must be a large capacity to produce power, which becomes energy per unit of time, which can then be distributed downstream, following physical laws that also resemble those of the human blood circulatory system. It’s simple, large capacity can only be provided by fossil fuels or nuclear power, while renewable sources are dispersed, not very concentrated and, equally important, not programmable and non.storable. This is the reason why coal.fired power plants continue to be built in Asia, despite the fact that everyone agrees on the urgent need to cut CO2 emissions.

The rule is valid all over the world: to make 1,000 kilowatts of photovoltaics, about 1.6 hectares of surface are needed, almost two football fields, which, however, produce only when it is sunny (normally 1,500 hours a year with a production of 1.5 million kilowatt hours). On the same area of ​​1.6 hectares it is possible to install a traditional 800,000 kilowatt gas power plant that works almost always, normally 7,000 of the 8,760 hours that there are in a year. This means that it can produce up to 5.6 billion kilowatt hours, 3,700 times what the photovoltaic system does, moreover in an intermittent and non.programmable way. Sure, the panels are more beautiful, they catch sunlight and they are clean, but that’s not enough to cover the demand of Asia’s billions of people, who need electricity to light cities at night, to cool off. in the summer, to run their factories, their shopping centers, their hospitals.

This is also true in Japan, a country that for decades has been trying to reduce dependence on fossils by moving to renewables, both because it has always lacked internal resources and has to import everything and because it was hit hard by the energy crises of the 1970s. He was one of the first to attempt the development of photovoltaics in the 1970s, thanks to the leadership in semiconductor technology, however, the results are partial to date and the electricity production from photovoltaics does not reach 8 percent of the total. Wind power, for geographical reasons, has never been important in Japan, while much more interesting has been the attempt over the years to exploit hydrogen as a vector in the transport sector. Here too, after the enthusiasm of the 70s and a revival in the 90s, developments have been marginal, while in 2021, forgetting the difficulties of the past, it is once again at the center of hopes, a bit like it happens in Europe.

Japan had relied heavily on nuclear power, but the serious Fukushima accident of 11 March 2011 broke this relationship of trust. The accident, it is worth remembering, was not due to a malfunction of the system, but to the trivial mistake of having put the diesel engines below sea level. When the tsunami wave came, the engines were covered with water, they stalled, the reactor cooling stopped and the reactor exploded. The incident sparked a backlash against nuclear power that led to the momentary shutdown of most of Japan’s more than 50 nuclear power plants, spurring even more enthusiasm for renewables. Nuclear power generation went from nearly 300 billion kilowatt hours in 2010, when it accounted for 30 percent of total electricity generation, to 40 billion in 2020, 4 percent of the total. The decline in consumption of about 200 billion to 1000 billion in 2020 has absorbed much of the fall in nuclear power, but both gas and coal consumption have increased, which currently account for 35 percent and 30 percent of production respectively. overall. Intermittent renewable sources, those at the basis of the hypothetical new models of electricity production, on which Japan has insisted for decades, remain at 12 percent of the total. Thus, 13 years after the Beijing Olympics, the electricity that will also be used for the Tokyo games will continue to be produced by the large power plants where the traditional sources are, those that allow the necessary energy density. The rest are hypotheses and hopes that are beginning, however, to be a little dated.

* Davide Tabarelli is president and co.founder of Nomisma Energia, an independent research company on energy and the environment based in Bologna. He has always worked as a consultant for the energy sector in Italy and abroad, dealing with all the main aspects of this market. It publishes in the main magazines dedicated to energy issues. Article published in the July 2021 issue of WE World Energy.

WE World Energy is the international magazine on the world of energy published by Eni – directed by Mario Sechi – which with its wealth of experience and science has earned a position of great importance in the international panorama of the sector media.