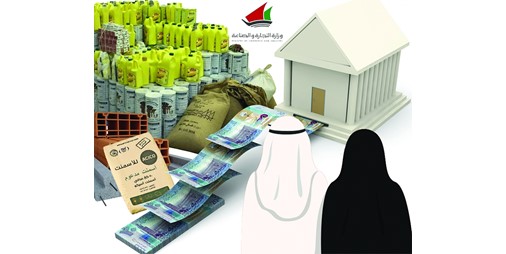 Official data issued by the Ministry of Commerce and Industry, obtained by Al-Anbaa, revealed that the total value of the support spent by “Trade” on food and construction materials during the period between January and the end of December 2021 amounted to 225.2 million dinars, most of which focused on supporting construction materials that acquired The largest share of the value of expenditure amounted to 137.3 million dinars, or more than 50% of the total expenditure volume, while spending on food subsidies during the same period amounted to 78.9 million dinars.

The data showed a remarkable growth in the volume of spending on supporting construction materials since the beginning of this year until the end of last December, as spending on supporting these materials amounted to 5.1 million dinars in January, then 5.6 million in February, then 5.3 million in March, then 5.4 million in April, then 6 million in May, 8.5 million dinars in July, before witnessing successive jumps that reached 12 million in July, 13 million in August, 16.4 million in September, 18 million in October, 20.4 million in November, and 21 5 million in December, in a clear indication of the growth in the construction and building movement that the residential sector witnessed during the second half of the year, starting from July until the end of the year, coinciding with the launch of building permits for new suburbs in the residential city of Al-Mutlaa.