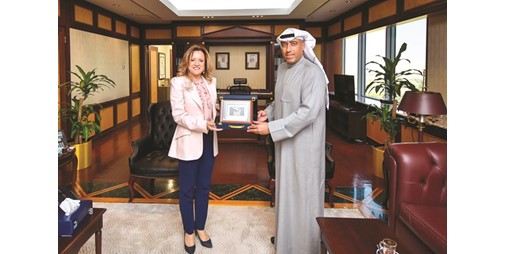 Starting from next June 15, with two flights per week on Sundays and Wednesdays.

In this regard, the CEO of Kuwait Airways, Maan Razouki, said that the Nice destination is one of the new destinations that Kuwait Airways is adding to its network of routes around the world, noting that this particular destination is among the important and preferred destinations in the choices of the honorable blue bird passengers. It is characterized by its attractive tourist places, especially as it is located on the Mediterranean coast and is considered a major tourist center in the country. It is also famous for its beautiful and picturesque beaches.

Razouki stated that the Kuwaiti company considered that the choice of the Nice destination came after a study of the feasibility of this destination and its multiple advantages for tourists, especially in the long summer. It has a positive economic feasibility.

On the other hand, Chief Executive Officer Maen Razzouqi received the Ambassador of the French Republic, Claire Le Fleischer, where the two parties discussed ways to enhance joint cooperation in the areas related to the commercial aviation sector and how to develop them in a way that benefits both parties and achieves the desired hopes and goals.