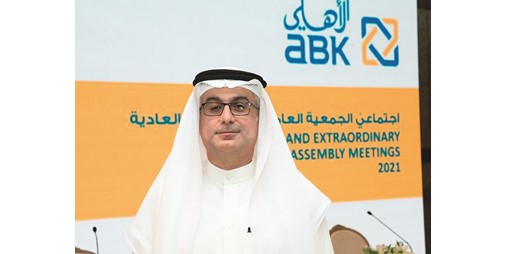 The Annual Ordinary and Extraordinary General Assembly of Al Ahli Bank of Kuwait, which was held yesterday, with an attendance rate of 92.33%, approved all items on the agenda, including distributing 5% in cash and 5% as a bonus to shareholders. It also elected a new board of directors for the next three years.

In his opening speech welcoming the shareholders and attendees, Al Ahli Bank of Kuwait Chairman Talal Behbehani reviewed the annual report for the fiscal year 2021, noting that the Al Ahli Bank of Kuwait Group has achieved operating profits of 82.1 million dinars, an increase of 12%, compared to the results of 2020. , while net profits amounted to 27.2 million dinars, earnings per share amounted to 12 fils, the bank’s total assets increased by 16% to reach 5.6 billion dinars, loans and advances increased by 9% to reach 3.4 billion dinars, and customer deposits increased by 12% to reach 3.9 billion dinars, and the group has succeeded in reducing the non-performing loans ratio to 1.55% for the year 2021, which are covered by guarantees amounting to 357%, compared to 1.57% and the coverage ratio of 339%, respectively in 2020. The capital adequacy ratio reached 18.27% .

During the meeting, the shareholders approved the Board of Directors’ report covering the financial activities of Al Ahli Bank of Kuwait for the fiscal year ending on December 31, 2021. The shareholders also approved the Board of Directors’ recommendation to distribute cash dividends of 5% of the nominal value of the share (5 fils per share). To distribute bonus shares at a rate of 5% (five shares for every hundred shares) of the issued and paid-up capital, by issuing 85 million new shares to be distributed as bonus shares to shareholders registered in the bank’s shareholders’ records as at the end of the due day specified for it on Wednesday, 11 May next , each of them in proportion to what he owns (five shares for every hundred shares), covering the value of this resulting increase in the issued and paid-in capital, amounting to 8.5 million dinars from the retained earnings, and authorizing the board of directors to dispose of the fractional shares arising from it according to what it deems appropriate.

Behbehani pointed out that the group has maintained strong investment ratings of A (stable) by Fitch and A2 (stable) by Moody’s. Central Kuwait.

For his part, Al Ahli Bank of Kuwait Group CEO George Richani said: “We have made great strides in the ‘Transformation and Growth’ strategy in 2021, which resulted in strong financial performance that was further supported by the global economic recovery. ABK International Group’s operations in Egypt and the UAE have also performed exceptionally well, contributing 40% of the group’s total operating income. We expect to maintain steady momentum in 2022 and are confident that we can continue to implement our strategy, and enhance our key strategic priorities – Capital, cost, liquidity, assets and governance.

Richani emphasized that as part of the “Transformation and Growth” strategy, ABK Group will continue to invest heavily in the bank’s digital agenda, enhance efficiency and enhance customer experience, enhance the bank’s presence in various demographics, and introduce new products and services. The group will also continue to invest in recruiting talented workforce and maintaining its national cadres, developing human resources performance, and integrating external operations in the group.

Al Ahli Bank of Kuwait launched the group’s first sustainability report in 2021, setting a benchmark that paves the way for a more sustainable future. Al Ahli Bank of Kuwait Group is committed to upholding the principles of Environmental, Social and Corporate Governance as a fundamental pillar in the way business is managed and managed, and the Group will continue to report on its ESG performance and achievements with maximum transparency to accelerate human progress towards ensuring social and environmental sustainability. His new commitment to the “Let’s Be Aware” campaign launched by the Central Bank of Kuwait in cooperation with the Federation of Kuwait Banks.