For delivering bribes in Argentina, Brazil, and Mexico, a US company must pay US$ 84 million 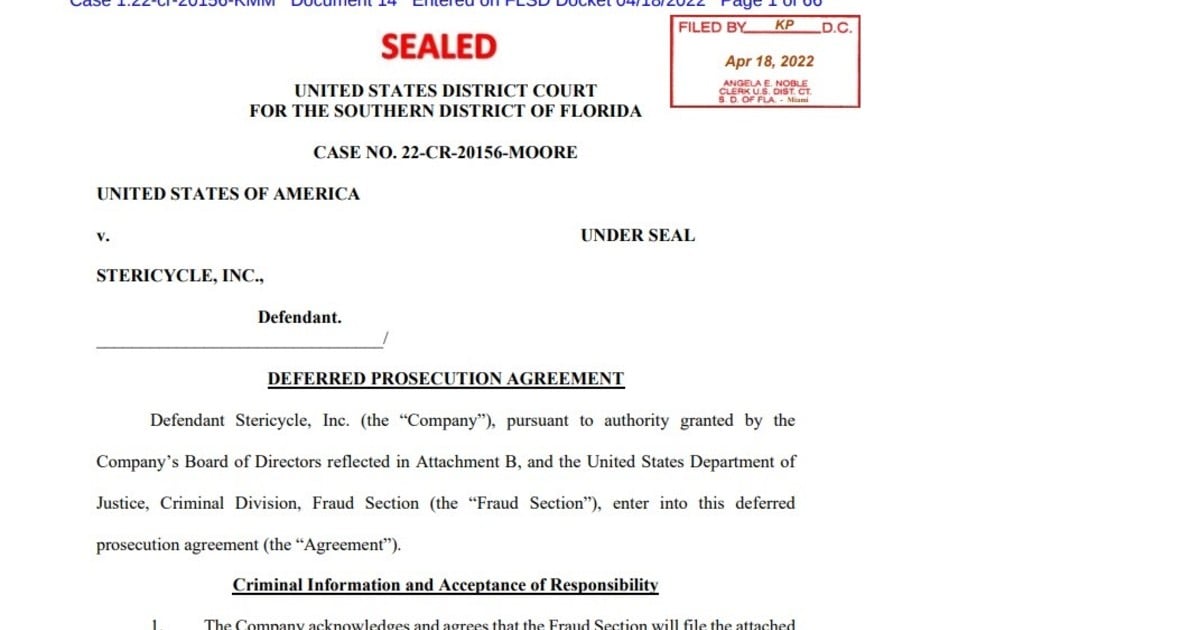 Stericycle, a waste management business, agreed to pay more than US$84 million to settle civil and criminal accusations brought by the US and Brazilian governments for bribery paid in Argentina, Brazil, and Mexico.

The Securities and Exchange Commission (SEC), the US capital market regulator, will receive US$ 28.2 million of that sum.

The Illinois-based company is accused of breaching the Foreign Corrupt Practices Act (FCPA) as a result of bribery activities in those three nations.

The Department of Justice and the Securities and Exchange Commission have both issued resolutions. In the first case, the business must pay $52.5 million to meet the criminal accusations.

The Department agreed to credit up to one-third of the criminal penalty against fines the corporation will pay to Brazilian authorities in connection with the same bribery, including an amount of about US$9.3 million to settle Attorney General’s Office investigations. Brazil.

According to the SEC order, from at least 2012 to 2016, Stericycle, a leading provider of medical waste management and other services with operations in 16 countries, paid millions of dollars in bribes to government clients in Argentina, Brazil, and Mexico to win and keep business.

Stericycle employees, according to the FBI, stored and emailed spreadsheets that identified government customers who had received bribes.

“The bribes were alluded to by code names in those communications, such as ‘alpha,’ short for alfajores, a popular confectionery in Argentina,” the SEC assures in a statement. They frequently utilized the phrase IP, which stands for “incentive payments.”

Stericycle also failed to apply its FCPA policies or processes before 2016, according to the claims, since company lacked appropriate internal controls as a centralized department of compliance to prevent or even discover misbehavior.

“Stericycle quickly expanded in Latin America without any oversight or compliance measures, as evidenced by widespread bribery schemes that lasted many years in most of its Latin American operations,” said Eric I. Bustillo, director of the Securities and Exchange Commission’s Regional Office in Miami. “Companies pursuing worldwide expansion must not overlook the importance of proper controls.”

Stericycle agreed to pay around $28.2 million in interest after admitting to violating the FCPA’s anti-bribery, records, and internal accounting controls requirements.

The SEC order stipulates that any refunds paid to Brazilian authorities be compensated up to $4.2 million. As a result, the company’s minimum SEC payment would be around $24 million. Stericycle is also required to hire an independent corporate monitor for two years, with one year of reporting after that.

In Argentina, how did the bribery work out?

He claims in the Justice Department document that between 2011 and 2016, Stericycle plotted and agreed with others to corruptly propose and pay bribes to officials in Argentina through certain of its employees and agents.

Bribes were paid in order to gain unfair advantages in order to win and keep waste management contracts, as well as to secure authorization or priority release of payments due under those contracts.

According to the Department of Justice’s dossier, “Stericycle received at least $4.4 million in revenues through contracts secured and kept corruptly with the Argentine government.”

Bribe payments to Argentine government officials were done with the knowledge, approval, and direction of Stericycle Latin America and Argentina leadership.

For instance, on January 11, 2011, a Latin American executive sent another with a spreadsheet listing the top 20 selling, general, and administrative expenses.

The spreadsheet included comparisons of spending numbers “with and without ‘PI’ (incentive payments),” and broke out the amounts of these incentive payments by jurisdiction, including Mexico, Brazil, and Argentina, according to the manager’s email.

The bribes were paid in cash by Stericycle Argentina salespeople. When a bribe was due, the employee submitted a payout estimate, which was typically a proportion of the contract value.

The sales clerk got cash from the Stericycle Argentina office in Buenos Aires after the payment was approved, and then delivered the bribe money to the official.

“For example, on or around September 27, 2012, two Stericycle Argentina sales representatives wrote an email to an Argentine official about a bribe. “The bribe amounted to 10% of a regional health ministry’s contract payment for waste collection services, which totaled 213,000 pesos (about US$45,610),” according to the Justice Department document.

On September 28, 2012, one of Stericycle Argentina’s sales representatives handed the Argentine official a bribe payment of 21,300 pesos (about US$4,560) in cash.

The paper continues, “The employees of Stericycle Argentina utilized the words ‘alpha’ and ‘alfajores’ as codes to refer to bribe payments.”

“For example, on or around May 30, 2013, two Stericycle Argentina sales representatives exchanged an email about unpaid invoices from an Argentine regional health ministry, writing: ‘I must inform you that when I spoke about this issue, they reminded me that the alfajores of the latest payment are due.’

According to the US body, one of the sales personnel emailed his colleague on September 2, 2013, with the subject line “Alpha D of the latest payment of $257,730 canceled on August 30.”

“I also want to remind you that we still owe the alphas,” one of Stericycle Argentina’s sales staff wrote from a personal email address to the personal email addresses of company officials on or about December 1, 2014, regarding sums owing by a regional health ministry. Because of the latest patch, having this up to date is quite beneficial when it comes to applying pressure.”

Financial records kept by company officials monitored the payments and included references to “alpha” and “IP Commissions,” the same code words used by Stericycle in connection with bribery made in Mexico.