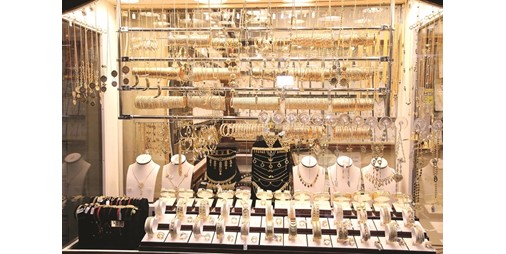 Data from the World Gold Council revealed that citizens and residents in Kuwait bought 177 tons of gold during the period from 2010 until the end of last March, including 144.2 tons of goldsmiths, making up about 81% of purchases, in addition to 32.5 tons of coins, coins and bullion, making up 19 % of the total.

The data showed that the year 2014 recorded the highest level of gold purchases in Kuwait at 17.8 tons, while the per capita share of gold in Kuwait declined from its highest levels recorded in 2014 at 4.4 grams by about 20% to reach recently to 3.5 grams in 2021.

The figures showed that Kuwait bought, during the period from January to the end of last March, about 4.1 tons of gold, including 3.1 tons of handicrafts, in addition to 1 ton of gold coins and bars. The figures showed that Kuwaiti purchases during the first quarter of this year witnessed a decline of about 9%. The equivalent of about 400 kilograms compared to the first quarter of 2021, in conjunction with record increases in the prices of the yellow metal.

The figures showed that the highest purchases recorded by Kuwait since 2010 were in 5 specific years, as the year 2014 came as the highest volume of purchases for the country with a total of 17.8 tons, including 14.2 tons of handicrafts, and 3.6 tons of coins and gold bars, and 2018 ranked second in the volume of purchases It reached 17 tons, including 14 tons of handicrafts, in addition to 3 tons of coins and gold bars.

Gold ETFs led demand growth in the first quarter, amid rising geopolitical concerns related to the Russia-Ukraine war, as well as record inflation escalating around the world.

The report pointed out that gold exchange-traded funds recorded their strongest quarterly inflows since the third quarter of 2020, supported by demand for safe assets.