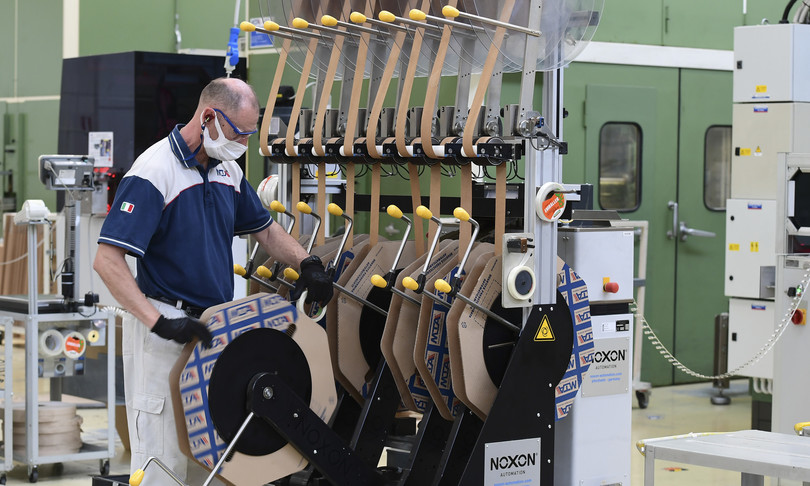 The manufacturing sector in the euro area continues to grow in August, but slows down to the lowest value in the past six months. In contrast, Italy which, together with Spain, records an index close to the highest value ever, up compared to July and signals a new and strong improvement in the health of the sector, caused mainly by the more rapid expansion of production and of new orders.

Among the monitored eurozone nations, albeit with growth slowed to its lowest level in 5 months, the Netherlands once again observed the highest improvement in operating conditions. More subdued expansions were reported in Germany, Ireland, Austria and France. The data for August were particularly impressive in Greece, where the largest manufacturing SME was recorded since April 2000. Here is the ranking of manufacturing SMEs by country:

European industry is moving at multiple speeds, but the German slowdown weighs on the Eurozone manufacturing index, which falls slightly below expectations. According to data released by Ihs Markit in the morning the index stood at 61.4 compared to the previous reading at 61.5 and down from 62.8 in July. It is the second month in which the pace of expansion slows down.

“Eurozone manufacturing companies once again reported one in August lively production, with a growth spurt that has now continued for fourteen consecutive months – commented Chris Williamson, Chief Business Economist of IHS Markit – the fundamental issue still remains the shortage of components, with the inability of suppliers to produce a satisfactory quantity of parts or to address the shortage of transport capacity to meet the logistical needs of the demand “.

And he continued: “Because of these supply problems, growth in new orders outpaced that in production with an unprecedented gap in survey history, even greater than the 24-year record observed in July. As a result, selling prices have risen sharply once again, albeit with some upward pressure alleviated by the slight cooling of purchase price inflation, even though still high material prices are exacerbating the problems of manufacturers. ”

In detail, here are the performances of the main European economies.

The Italian manufacturing sector recorded in August theyet another and high improvement in operating conditions. Production and new orders have generally increased rapidly and at faster rates due to stronger demand conditions. As a result, the level of backlog increased once again, and manufacturing companies continued to hire additional staff. At the same time, inflationary pressures remain severe, although the rates of increase in both costs and tariffs reported slowdowns during the month. The manufacturing PMI index reached 60.9 points, up from 60.3 in July and generally signaled a strong improvement, the fourteenth in a row, in the health of the sector.

The latest SME was also the third largest recorded, after only that of May and June.

Expectations were at 60 points. “The data for August showed faster growth in the Italian manufacturing sector – commented Lewis Cooper, Economist of IHS Markit – the SME remained close to the highest value ever, increasing since July and signaling a new and strong improvement in the state. health of the sector, caused mainly byfaster expansion of production and new orders. As a result, pressures on capacity continue to increase, with the level of backlogs booming, albeit at the slowest rate since April. Companies have continued to add staff at one of the fastest rates ever to cope with the increased workload. ”

Slowdown for German industry: the country’s manufacturing pmi index fell slightly more than expected in August, going from 65.9 to 62.6 against a forecast of 62.7. German companies “have struggled to keep up with demand due to restrictions related to the shortage of supplies“, highlights Ihs Markit.” We continue to see strong demand for German goods, with growth in new orders still close to record, but production levels are held back by difficulties on supply chains, “comments, the associate economic director of Ihs Markit. These problems “continue to push costs up at a fast pace and concerns of higher prices may be discouraging customers,” he explains.

The French manufacturing sector continues to register a robust growth, but showing slowdowns. This was highlighted by the Markit Ihs manufacturing SME index for the country, which in August stood at 57.5 points compared to 58 in July; the decline is however lower than expected, which saw the indicator at 57.3. This is the lowest value since February and the third month in a row that the index has fallen, despite seven straight months of production growth.

The Spanish manufacturing sector remained in a strong growth phase in August, according to the latest survey by IHS Market, with faster growth in purchases and employment supporting companies by helping them to increase production despite the substantial disruption in supply chains. The manufacturing PMI index rose to 59.5 points from 59 in July, against an expected drop to 58.9. The reading signaled a further marked improvement in the health of the sector, extending the current growth period to seven months. Furthermore, the strengthening of the business is among the most marked by the survey, which has begun