The highly anticipated Biennial of contemporary art in Dakar 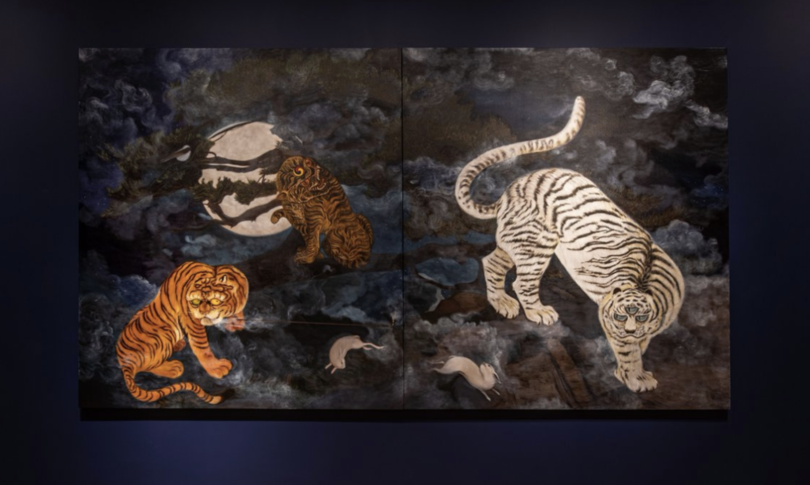 “Giant” installations have come to life in the Dakar setting as a symbol and warning of the artists who want to take over the public space. The highly anticipated Biennial of Contemporary Art will open its doors in Senegal on Thursday, in its fourteenth edition. And the novelty of this year are the works of the artists who “invade” the public space.

Faced with the magnetic blue of the ocean, the inhabitants quietly approach the two pyramid-shaped mausoleums. Inside and out, dozens of faces on the ground, eyes closed forever, some screaming. The shoes escape from the mausoleums, lined up to the edge of the cliff, as if falling into the sea. A powerful re-enactment and denunciation, by the Senegalese artist Yakhya Ba, of the tragedies of illegal immigration that have involved many African families.

Each artist in this show explores inter-cultural exchanges, subverting empirical cartographies and the idea of fixed cultural identities by mapping the spaces ‘in-between.’https://t.co/AKYSg5W1rb pic.twitter.com/xnRjxdLViN

A little further on, an imperturbable oversized dog is the subject of selfies by amused residents, the goal of the Egyptian Khaled Zaki is to bring joy to children and raise the problem of stray dogs in the capital. Tearing down “the walls of galleries and museums”, moving “the artist’s studio into the street” and breaking “the elitist imaginary that citizens have of art”: this “Doxantu” project (the waterfront, in Wolof language) is a real “advocacy for an art more present in the public space”, explain the organizers of the Biennale.

The capital of Senegal, Dakar, is renowned for its creative energy, in a country that has seen the birth of great artists such as Ousmane Sow. After a postponement in 2020 due to Covid, the fourteenth edition of the Biennale welcomes the best of the continent’s contemporary creation until 21 June.

The 2018 edition attracted almost 250,000 visitors, of which over 50,000 from abroad. 85 countries and more than 2,500 artists are represented. The artistic director, El Hadji Malick Ndiaye, has the frankness to observe that, in this poor country, “society, beyond the cultural actors, has not always lived the Biennale”, despite the hundreds of exhibitions and places open to all and media coverage.

For this reason he asked 17 artists to create monumental works to “dialogue” with the places along the corniche (fishing village, university, prison), and planned performances “in remote places” in the capital. The theme of this edition is “Ndaffa (the forge, in Wolof),” the construction of new models. Almost 300 exhibitions in Dakar and in the islands of Ngor and Gorée, and about a hundred in other cities and towns of the diaspora, are in IN program and about 350 OFF projects. “This Biennale is symbolically strong because it took place after the Covid-19 crisis that shook and tested African countries”, underlines Ndiaye heard by France Presse.

This week’s Friday Dispatch can be viewed across the Region, with exhibitions currently open in Thomas Dane Gallery as well as the National Galleries of Scotland⁠
⁠Https: //t.co/CHNO9VRBav pic.twitter.com/qrdi0VEkOu

“Africa is at the crossroads of various changes: movements for a new appropriation of African heritage, questions on the CFA franc (the so-called colonial currency, ed.), On the autonomy of African countries, unrest in various countries, the birth of a new conscience town … “In this Biennale,” we invite artists to have their own points of view on all this, to forge new ways of thinking, to do everything in order not to withdraw into themselves and not go adrift. In short, to make culture pop. ”

The international exhibition presents, in a former courthouse with a timeless atmosphere, 59 visual artists from 28 countries, of which 16 from Africa and 12 from the diaspora. Among these, visitors will be able to get involved in the dreamlike visions of African contemporary art, from the works of the Senegalese painter Omar Ba, from a video by South African Sethembile Msezane or from an installation that transports the Franco-Togolese-Senegalese, Caroline Gueye into space. , also astrophysicist.

Other key exhibitions include a “forest” of 343 sculptures – men, women, children, armless, as if overwhelmed – by the Senegalese Ousmane Dia, who denounces inequalities, inviting us to build a new order “which focuses more on human dignity. “. A scientific symposium, organized by the writer Felwine Sarr, will discuss the restitution of the African heritage. “This is also the time when there is a war on the other side of the world,” Ndiaye said of the Russian invasion of Ukraine. “When the guns pop, we have to pop culture and bet even more on it.”