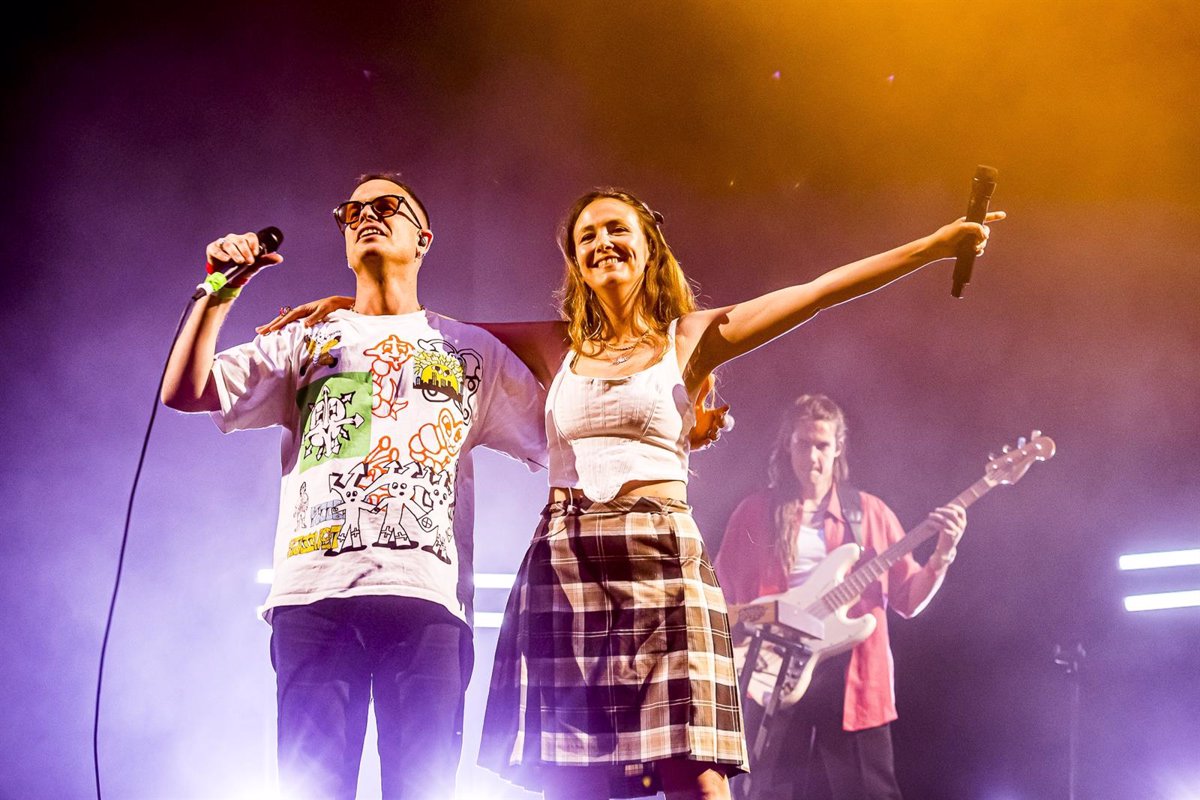 Three years after its last edition, the Tomavistas festival resurfaces after the pandemic. This was demonstrated this Thursday, on its first day, to the rhythm of a Spanish indie pop praised by some of the most prominent figures on the current music scene, such as Rigoberta Bandini, Cariño, Alizzz o Senra.

In the middle of spring in Madrid, but with up to 34º degrees, the festival managed to bring together, this time at the IFEMA, around 8,500 people according to the organization, to enjoy the ten artists scheduled for its first day, which will be followed by another two in which national and international artists will perform.

The Valencian Jimena Amarillo opened on the 5:30 p.m. closed to seven hours of concerts and he did it with his “pop moñas”which includes songs like ‘Playing the Sims’ or ‘You can’t tell’, to the applause of an audience that was not yet very large because many were still trying to enter the venue.

Getting used to getting on the stages of Spanish festivals, the Barcelonan Rojuu went out to the Tomavistas to sing in front of an audience very dedicated to his shadow pop songs, as he himself defines his style. ‘Un paseo más’ or ‘Rehab boyz’ were the songs most chanted by the public, until Akira, a friend of the Catalan, came on stage and both started a party with pogos included.

The Rojuu’s show coincided with that of Confetti de Odio (Lucas Vidaur), which brought together those who preferred a calmer rhythm, away from pogos, with indie songs such as ‘Minuto de sonido’ or ‘Día horrible’.

Already at 19.30, with more public after having arrived at the venue many who finally left work, it was Cariño’s turn. Just arrived from Mexico and after their famous stint at Coachella itself, María Talaverano (vocals and keyboard), Paola Rivero (guitar) and Alicia Ros (vocals and bass) presented their second album in society, which they combined with their already famous songs. Thus, the public sang with them from ‘Year of shit’ to ‘Bisexual’ or ‘If you want’.

Later, it was Cupid’s turn, who threw to hit. The band formed by the Barcelona-born ragpicker Pimp Flaco and the Madrid-Canarian ‘bedroom pop’ group Solo Astra — made up of Alejandro ‘Al’ García (bass), Toni D Díaz (guitar, keyboards and backing vocals), ‘Dannel’ Rodríguez (drums) and Luis ‘Luichi Boy’ Sansó (voice and guitar)– decorated his stage with dozens of stuffed animals to sing songs like ‘I don’t care’.

At the same time, the Murcians Trashi, María Lázaro (percussion), Luis Morera (bass), Luz Abril (guitar) and Sergio Nicolás (voice and guitar) brought their good vibes and melancholy songs to the small stage, where they made the public accompany them in songs like ‘I wish I had never met you’.

One of the most anticipated moments of the day came around 9:30 p.m., when attendees crowded in front of one of the main stages so as not to miss a second of Rigoberta Bandini’s concert. ‘In Spain we call it soledad’ It was the theme chosen by the singer to open a concert in which she was accompanied by her musicians and a group of dancers.

His was the biggest show of the day in terms of scenery, and also because of the support of an audience that knew almost all his songs and especially enjoyed ‘Perra’ or ‘Ay mama’. “I don’t know why our boobs are so scary” was probably the most chanted of the night. Bandini said goodbye with ‘Too many drugs’, throwing a whole party on stage.

Alizzz, one of the forerunners of new Spanish pop as a singer and producer, took up the baton and began, drink in hand, to the rhythm of ‘Fatal’, to give way to something in a few songs –including ‘Disimulao’– that Since the day’s poster was announced, the public had been waiting for the performance of ‘Amanecer’ with Bandini.

But the real surprise came in ‘Ya no vales’, when C.Tangana, a great friend of Alizzz, unexpectedly appeared on stage before an audience that was stunned for a second. Once assimilated, the attendees went crazy until the end of the song, when they fired the man from Madrid to applause. With the emotion for the sky, Alizzz finished her concert with ‘I don’t feel anything anymore’, but not before performing ‘El Encuentro’ alone.

At the same time as Alizzz, the artist and activist of Taiwanese origin Putochinomaaricón (Chenta Tsai Tseng) acted. Before an audience that was not so large in number, but devoted, Chenta performed, together with her dancers, songs like ‘Gente de shit’ or ‘Tamagotchi’.

The person in charge of closing the night was Sen Senra. ‘I don’t need you anymore’ or ‘You have heaven reserved’ were some of the most sung melodies by the attendees. The Galician singer thus put the finishing touch to a first day of Tomavistas in which Spanish indie pop was vindicated.

The festival thus opened the Madrid festival season, but before giving way to other big events, there are still two days left in which other prominent names will perform. Carolina Durante, Kevin Morby, Suede or VVV (Trippin’you) will play this Friday, while The Marías, Camellos or Kings of Convenience will play on Saturday, a day of concerts that will end at dawn on Sunday with the electronics of the British Jungle.