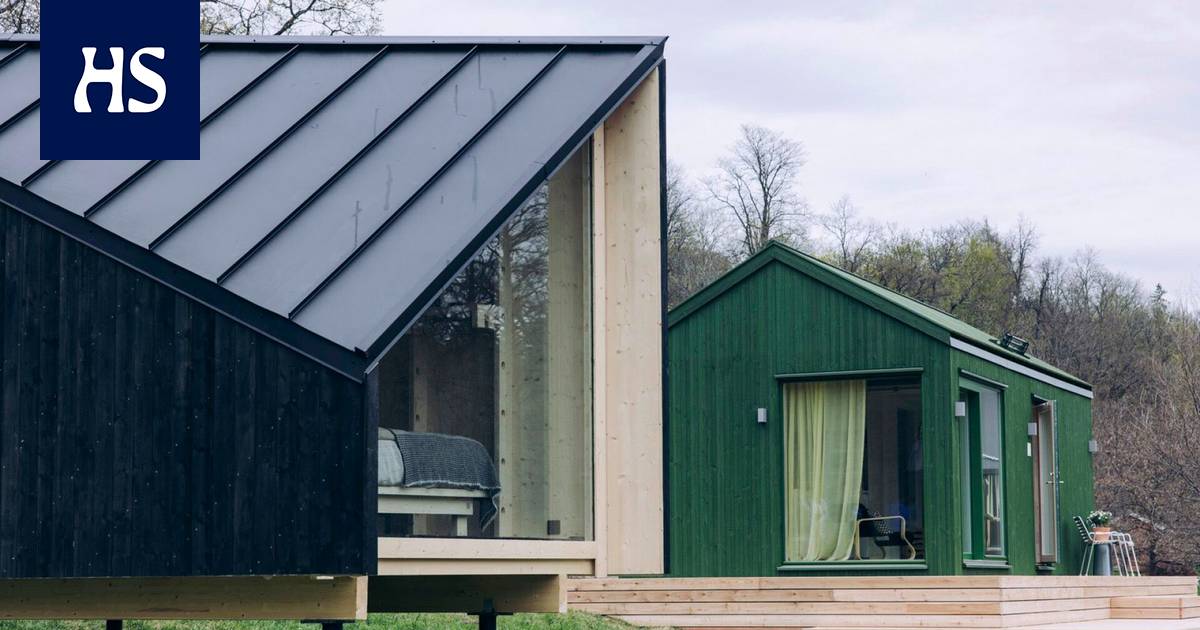 The design of the Architect’s House opening in Fiskars has been hampered by the corona pandemic, Russia’s invasion of Ukraine and the deceptively clayey country.

If if someone thinks that organizing a summer art event in an idyllic ironworks environment is a leisurely task, let the curator ask From Kari Korkman.

The Fiskars Biennale is an ongoing event throughout the summer that takes place in Raseborg alternately with the Helsinki Biennale. It is built on the main exhibitions and partnership events in the ironworks village.

Korkman’s own contribution is at its highest Architect’s house which showcases new wooden architecture with eight small houses.

During his career, he has organized hundreds of events, but this has been the most challenging end.

As of this writing, one unfortunate little house has just been erected.

The Aalto wood studio in Kore was still on stage on Friday, May 20th. The two-story Kore is made to save space. Picture: Pirkko Kotirinta / HS

Exhibition planning began a couple of years ago, at a time when there was no idea of ​​the effects of a corona pandemic. At that time, one of the goals of the Fiskars Village Biennale was to bring architecture closer to the Finnish consumer and the exhibition visitor. Korkman was frustrated that the work of Finnish architects could be seen in the eyes of the general public as an impersonal mass production.

At Fiskars, it was decided to present a different reality with the help of individual small houses.

“I think the distance between ordinary people and architects has grown too great,” Korkman explains on the phone. “That’s why I’ve wanted to wake people up to demand more from house factories and construction companies. And that means more time for architects to design. ”

The Original Sommar 30 house in Sommarnönen, Sweden, draws its inspiration from a traditional barn. In addition to the living area, the house has a kitchen, toilet and shower room. Picture: Fiskars Village Biennial

Korkman contacted about thirty architectural firms and all of Finland’s leading house factories. He commissioned the architects to design a wooden house that should be no more than 30 square feet and that could be moved as such from one place to another.

The house factories were attracted by the change in the law in 2024. The law currently under discussion is expected to change the building permit procedure in a more permissive direction. For non-continuous residential buildings of less than 30 square meters, such as barns, warehouses and sauna cottages, the permitting procedure may even be abandoned altogether.

According to Korkman, for example, several thousand small houses have been sold in Sweden during the year.

“I consider it very possible that the same phenomenon will be repeated in Finland. The pandemic increased the popularity of telecommuting, with many looking for alternatives between home and office. And preferably from a place as close to nature as possible, ”he says.

“It is exciting to see what that legislation in Finland will eventually look like.”

Those who have booked an overnight stay at the event can wake up in the heart of nature. However, you have to get up before the show guests arrive. Picture: Aleksi Poutanen

Curator optimism is supported by a recent survey by the City Counselors Working Group and the Commonwealth Association. According to it, a typical Finn who wants to live in the country is a woman in her forties living in the center of Helsinki with a spouse, pets and paid work. He wants to live part-time in the peace of nature, preferably near the lake shore.

According to the respondents, the apartment does not have to be large, but it should be located close to Helsinki.

All the things that the small houses that will be built for the Fiskars Village Biennale are trying to answer.

“They can replace summer cottages at the end of their life cycle, but they can also provide additional common space for use by housing companies that own the land, for example. They can even function as common guest houses or remote spaces for residents, ”Korkman envisions.

Challenges the project has really been enough. During the pandemic, pent-up demand caused the world’s subcontracting chain to fail, and house factories ran out of components needed for construction.

Then Putin invaded Ukraine, and timber imports from Russia ceased. As a result, two pre-designed small houses will not be presented at Fiskars at all.

“They weren’t born in the final meters,” Korkman regrets.

“On the other hand, the plot might have been a bit cramped for ten houses,” he then notes.

Yes, the plot. There have been other problems with it.

Ulla Koskinen, the founder and editor-in-chief of Asun magazine, is responsible for decorating the mini-houses. The Artek interior of Sommarnöte’s house was designed by Joanna Amemori Koskinen. Picture: Aleksi Poutanen

Fiskars The Village Biennale is held in a scenic ironworks landscape in southern Finland. Most of the small houses in the exhibition stand on a sunny meadow bordered by an oak forest, forming an spectacular route through an amazing landscape.

According to Korkman, houses are “larger than their square footage” precisely because of their relationship with nature.

“They are strongly connected to the surrounding nature. And then they have big window surfaces, for example, ”he says.

Despite soil surveys, however, the meadow plot was unexpectedly exposed to clay in the aftermath of a rainy spring. A couple of days before the interview, the piles of one of the small houses had failed, and the house collapsed.

Now the curator assures everything is fine.

“We eventually had to drill to a depth of 13 meters to find a hard foundation for the screw pile,” he says. “Now it’s excited to see if the piles hold. And yes they do. ”

In Fiskars Sunday’s opening day is expected to be even more exciting than usual. The idyllic meadow still looks like a construction site, and one of the houses is missing doors and windows due to delivery problems.

According to the curator, they will be in place in early June.

Also, some of the ramps and railings have not yet been inspected, which is why the public will not be able to enter the houses until Friday 27 May.

“From the outside, of course, you can admire them even earlier,” says Korkman.

Surprising setbacks are, of course, reflected in increased spending. Now Korkman hopes the revenue side of the event will succeed. All the small houses owned by the house factories will be moved out of Fiskars in the autumn and sold to willing buyers during the event. The price varies from 50,000 euros to 150,000 euros depending on the house and the level of equipment.

The individually designed interior of each house and the art in the houses are also for sale, and the money comes from accommodation activities as well. Visitors when it is possible to rent a small house for overnight stays. In the morning, however, you have to get out of bed before the earliest guests of the Biennale step inside.

About the challenges despite Korkman believes in the future of small houses. The house factories he interviewed agree on their need, and he himself hopes that at least one of Fiskars ’small houses will end up in series production.

He also trusts the rising standards of Finns in architecture as well.

“I see that literacy in architecture has increased. People want different visual and functional solutions that support their own personality. We are now looking for suitable housing. ”

One can include one’s own idyllic little house in the heart of nature somewhere near the town house.

The kind of place where it is good to breathe.

And with doors and windows.

Fiskars Village Art & Design Biennale 22.5–4.9.2022. The small houses in the Architect’s House complex will be accessible from 27 May.

Below are the small houses on display at Fiskars with photographs and observational images.

Ateljé Sotamaa’s UFO house has both a large landscape window and a skylight. The house is designed for both nature tourism and telecommuting.

Ulla Koskinen is responsible for curating the interior design of the houses with design companies. Among them are Artek, Nikari, Woodnotes, Fiskars and Iittala. There is also contemporary art on the premises.

The specialty of the exhibition is Kristian Talvitie Koja. The house is one of the winners of the Polestar Design 2021 competition. The aim is to encourage local travel.

Inside the Koja house is a tree that complements the resident’s nature experience. The design has aimed for the smallest possible carbon footprint. Picture: Fiskars Village Biennial

Studio Park Space of Mind can be erected in the backyard, on the roof terrace or in a remote wilderness.

Studio Park’s Space of Mind is an award-winning house from Wallpaper magazine, with large windows allowing you to enjoy the scenery. Picture: archmospheres

Read more: Secrets of knots and multi-sensory art – Fiskars Biennial opens to the public on Sunday

Correction 5/22/2022 at 6:38 PM: Contrary to what was first misspelled in the caption of the first image in the article, the image focuses on the Space of Mind in Studio Park, not the Hammoc designed by Leo Lindroos and Tuuli Kanerva.