At the Uffizi, ‘Conte Ugolino’, painted at the beginning of the 17th century, enters the collection 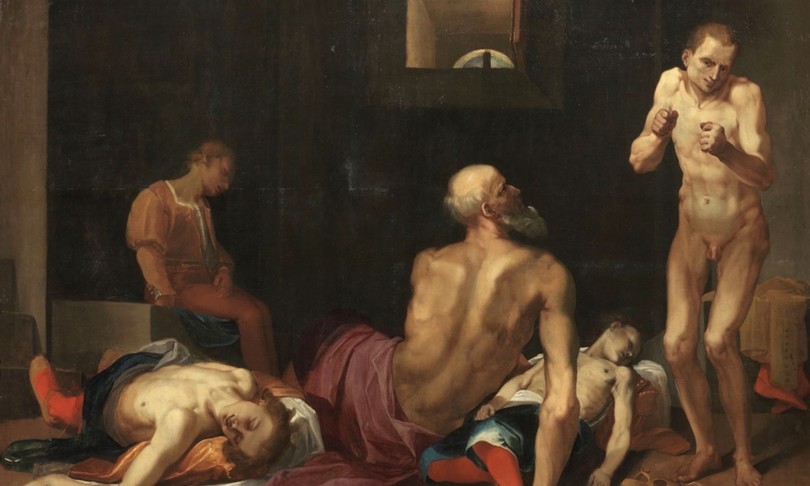 The work, large in size and also for this reason of considerable impact, will soon be exhibited, on a temporary basis, in the Niobe room on the second floor of the Gallery of Statues and Paintings, where it will remain until the end of Dante’s year.

The painting is linked to one of the most famous episodes of the Divine Comedy, described in the XXXIII canto of the Inferno. The protagonist is Count Ugolino Della Gherardesca, guilty of betrayal of his homeland: a most infamous sin in Dante’s vision, which for this reason plunges him into the ninth circle, the deepest and closest to Lucifer.

In historical reality, the Pisan noble was locked up with two children and two grandchildren in the Torre Muda in Pisa, and there condemned to starve. The Poet tells the story, concluding it with the famous verse “Poscia, more than ‘l dolor, poté’ l fasting”, recalling how Ugolino out of desperation had eaten the flesh of his relatives: a part of the brutal and bloody story that the artist has avoided, preferring the no less dramatic (but much less grim) moment of the last stages of their slow agony.

In the painting the scene that precedes the tragic epilogue is represented, the one corresponding to the triplet “how a little ray was put / in the painful prison, and I saw / for four faces my very appearance”.

In the visual rendering of Dante’s verses, Fra ‘Arsenio reaches the apex of the drama: in the foreground a livid light reveals two bodies already lifeless, while in the background a young man collapses, consumed by hunger. On the right a trembling nude standing, close to death; Ugolino in the center, depicted from the back, helplessly watches the end of his loved ones before dying himself.

The bodies stand out against a dark background, illuminated by a beam of raw light that highlights the anatomies, rendered in their physical misery with inexorable anatomical exactness. The angularity of some profiles reveals the attention to truth and the naturalistic vocation of Fra ‘Arsenio, who in Florence had probably assimilated these stylistic characteristics from Jacopo Ligozzi and from Bernardino Poccetti’s fresco cycles.

The attribution of the canvas to the painter is due to Mina Gregori, pioneer of studies on the Florentine seventeenth century: thanks to the unmistakable subject, in texts of the time the scholar has traced the original location of the painting in the Spezieria of the Convento Servita della Santissima Annunziata in Florence, where it remained until the second half of the nineteenth century.

Fra ‘Arsenio, born Donato Mascagni, entered the hermit community of the Servants of Mary of Montesenario in 1605; from 1608 to 1614 it was inside the Florentine convent of the Santissima Annunziata, where he created ‘Il Conte Ugolino’.

The value of the work is also given by the rarity of the subject for the time. In fact, a large number of illustrations of the Divine Comedy on paper are known from the Middle Ages (the Uffizi have the splendid series dedicated to it with 88 sheets designed by Federico Zuccari in the 1880s), while up to the nineteenth century representations in painting or sculpture of Dante’s episodes are a real rarity.

“Precisely in the year of Dante, thanks to the generous gift from the Friends of the Uffizi Galleries, the Museum is enriched with a rare and sophisticated work, in the past exhibited to the public only on the occasion of the great exhibition on the Florentine seventeenth century at Palazzo Strozzi, in 1986.

It is an early testimony – explains the director of the Uffizi Galleries Eike Schmidt – of the fortune of the Divine Comedy in monumental figurative culture: before this painting, only Pierino da Vinci – in a bronze bas-relief now in the collection of the Prince of Liechtenstein – had ventured into the scene of Count Ugolino, a subject that will be frequented only from the end of the eighteenth century “.

For the president of the Friends of the Uffizi, Maria Vittoria Rimbotti: “It was thanks to the non-profit association Friends of the Uffizi Gallery that we were able to buy and donate Mascagni’s ‘Il Conte Ugolino’ to the Uffizi. This work, which recalls a Tuscan character contemporary to Dante Alighieri, is part of Florence and it is right that it has returned to the Florentines ”.