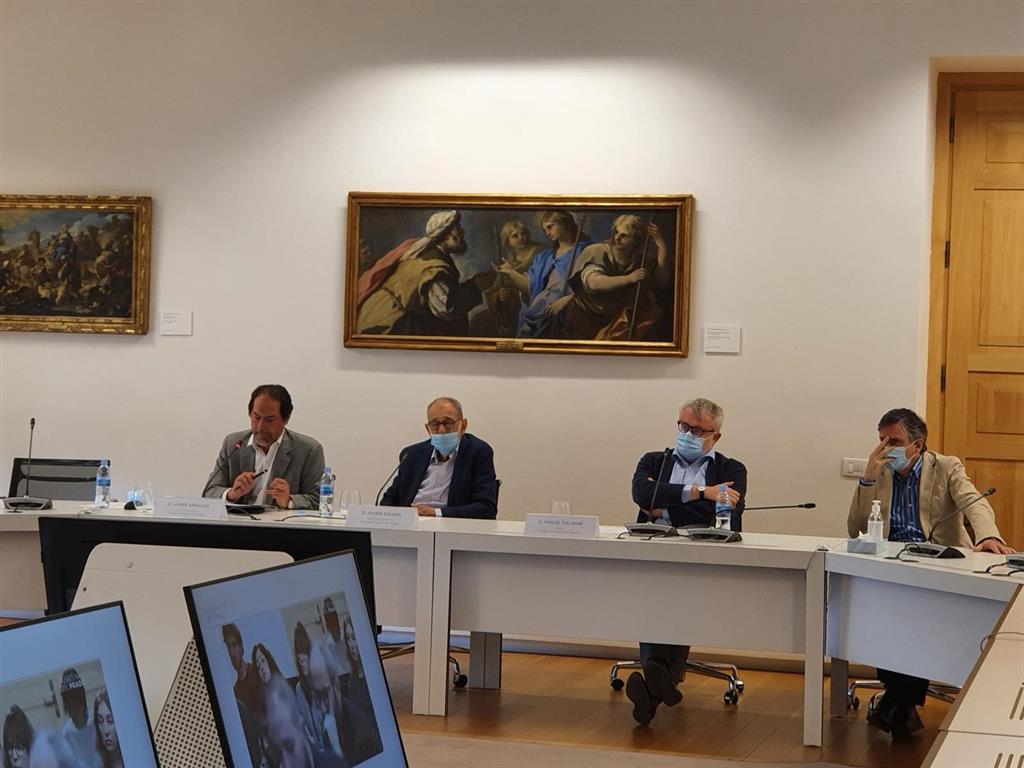 The Prado National Museum has presented this Monday at the Casón del Buen Retiro the lines of action of its Study Center, which consolidates a program attentive to the reality of contemporary culture reinforcing the scholarship system dedicated to research and cultural and museum studies activities.

The Study Center of the Prado Museum has a program of 19 research or predoctoral training grants that, as explained by the head of the center, Javier Arnaldo, “They have been reinforced in the last five yearsIn addition, the center has five postdoctoral research fellowships.

The “great novelty” of this program is the incorporation of two new research grants, “more ambitious” since they have a duration of two years, both postdoctoral. The first of them is financed with 43.200 euros by the María Cristina Masaveu Peterson Foundation, designed to award a 24.month stay at the Study Center to a proposal for a temporary exhibition at the Prado Museum. “It is a resource for generational renewal and to be able to recruit young talent“, Arnaldo stressed.

The second of these new scholarships is the Allen & Overy, endowed with 38.000 euros for gender studies, which is also a 24.month scholarship and intended for researchers and PhDs to dealing with issues such as female artists, female sponsorship of the arts and any other matter that can be linked to gender studies, as well as the historical memory and the Prado Museum collections.

Although he has stressed that he does not have the total figure for the budget of the Center for Studies program, Arnaldo has assured that it is made up of at least 250,000 euros per year, as well as financial endowments that do not enter the center’s budget but that activate programs “very directly”, as is the case with postdoctoral scholarships–

The 250,000 euros a year budget is distributed in 195,000 euros, the largest budget in the center, for scholarships for training and predoctoral research; and at least another 60,000 euros for activities.

Likewise, the head of the Study Center has ensured that they will benefit from a part of the European Funds that the Prado National Museum will receive, which will be 22 million euros in four annual installments. “The Study Center certainly benefits from a part of these funds, with which it fundamentally wants to develop its digital aspect“, has specified.

For Arnaldo, the basic objectives of the Centro de Estudios del Prado are training and research; and disseminate and promote knowledge. “The will of the center is to serve as a stage for research exchange, growth in ideas and to serve as a boost to study and research“, has said.

The study center can offer researchers the use of the Art Library with more than 150,000 books, 1,500 magazine titles, 260 auction titles and various audiovisual materials, to which must be added 7,000 volumes of old collection or the 17,000 documents scanned so far.

A MUSEUM ALSO HAS TO “DO RESEARCH”

During the presentation of the center’s programming, the president of the Prado Museum Board of Trustees, Javier Solana, pointed out that, although the “most important” thing the museum does is collect, store and teach, “there is much more to do”: “You have to do research.“

Thus, he stressed that the Study Center “does research on art, on paintings, on history.” “It is a very endearing act and for me very significant. It is a very important moment for the museum, something we wanted to do and we have finally found the people and the resources“, Has celebrated.

For his part, the director of the Prado, Miguel Falomir, stressed that the Center for Studies “aspires to become a place for reflection, debate, both on issues that have to do with museology and the content of the collections of the Museum”.

Likewise, he added that it is also a center that “has to ensure the future of the museum” and not be “only a permanent place of ideas, but also that it cares about training future museum curators“.

“It is not a secret that sometimes the parenthesis between the university and the museum is great. Go from university to development a job in the museum sometimes some tools are missing and the Study Center wants to be that bridge“said Falomir.

The Study Center of the Prado Museum, based in the Casón del Buen Retiro, is, since 2009, the “backbone instrument proposed by the institution to transcend its traditional functions of conservation, exhibition and dissemination; and also become a center for training of professionals and transmission and creation of knowledge.

Among the academic novelties of this program are the ‘Encounter Alterity: Jews and Muslims in the medieval and modern visual culture of the Mediterranean’, which will allow to analyze the creation and development of the image of Jews and Muslims in their condition of “being another” in the Iberian Peninsula during the 15th to 17th centuries and its use as a political instrument.

In addition, the ‘International Congress Cultural coordinates in the museology of the present: Five neologisms’ invites us to carry out an analysis of contemporary museological discourse and its effects on cultural communication, based on five neologisms: Demomuseum, Exomuseum, E.museum, Museumsofia and Hypermuseum.