Tommaso Di Francesco: the sense of a story transfigured into poetry 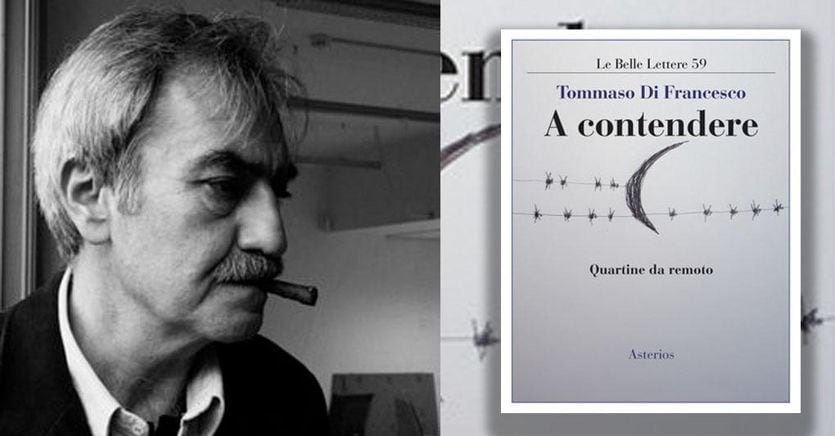 Along with many other things: essays, stories, fairy tales.

A look at the world through a double register

Now it is as if, in “A contendere”, just published, these two biographical souls are held together more than ever and better than ever. As if, in this case as never in the past, Di Francesco had wanted to recognize and explicitly declare its mixture. If not more: their being consubstantial with each other, their inseparability. Here: it is as if, through the poems of “A contendere”, this inseparability now assumes a postural and structural dimension. From the point of view of form, the collection is perfectly compact: there is no poem that is not composed of two stanzas, each of which in turn consists of a quatrain, always in hendecasyllables; and there is no poem in which the second verse is not written in italics. And it is here that Di Francesco seems to want to reveal, albeit apparently disguising it, the double register of his gaze on the world: in this juxtaposition of stanzas whose graphic variation, if you are not mistaken, always seems to coincide with a corresponding variation of tone.

Even Raffaeli, in his “Note”, recognizes in this alternation of registers the expression of a “dislocation of being”, but identifies its meaning, rather, in a desire to distinguish between the “rational and irrational part of perceiving”, in a desire to restore the sense of the continuous overlapping in our days of moments governed by rationality and of others, vice versa, vanquished by its opposite: by irrationality, by emptiness, by nothing. And of course: our lives are full of irrationality, of emptiness, of nothingness, not only in their daily dimension but also in a broader, broader perspective. Where on earth could we find a more sensational manifestation of emptiness and nothingness, in fact, if not in wars, in poverty, in widespread deprivation of all kinds? “The gutted houses seemed to be announcements, / the screaming children sounded like songs / they really looked really not bad / bodies in ashes from a side effect”, we read for example in a quatrain; or, in another: “The failures close one by one, / the body and the species close the filaments, / we do not leave us without that sense of smell / of a choice prey to help”.

An “Me in History”

An “I in History” together with a “personal, almost intimate I”. But it is exactly this difference in perspectives that suggests a possible further interpretation, which sees in the alternation between the stanzas, in addition to the tracing of a line between the rational and the irrational, also the mirror of that same alternation between registers belonging to the biography of ‘author: an entirely political, combative register, open to the world, projected into history, on the one hand, and a more intimate register on the other, almost familiar and sentimental, never folded only on itself but in any case sunk into the life of every day. As it is inevitable, the distinction between one and the other register is never clear.cut, definitive: it is not so from a formal, graphic point of view – in the sense that sometimes, in a poem, we seem to perceive a tone more political in the first verse and a private tone tout court in the second, but elsewhere, in other poems, the opposite happens, that the private tone prevails in the first verse and the political one in the second. Nor is it in terms of content, because it often happens that the tones are mixed, confused one in the other, even within the same verse.

It is obvious, either because poetry as such can be both civil and introspective; either because each of us is inhabited by a multitude of rooms, irreducible to order, to an absolute unity.