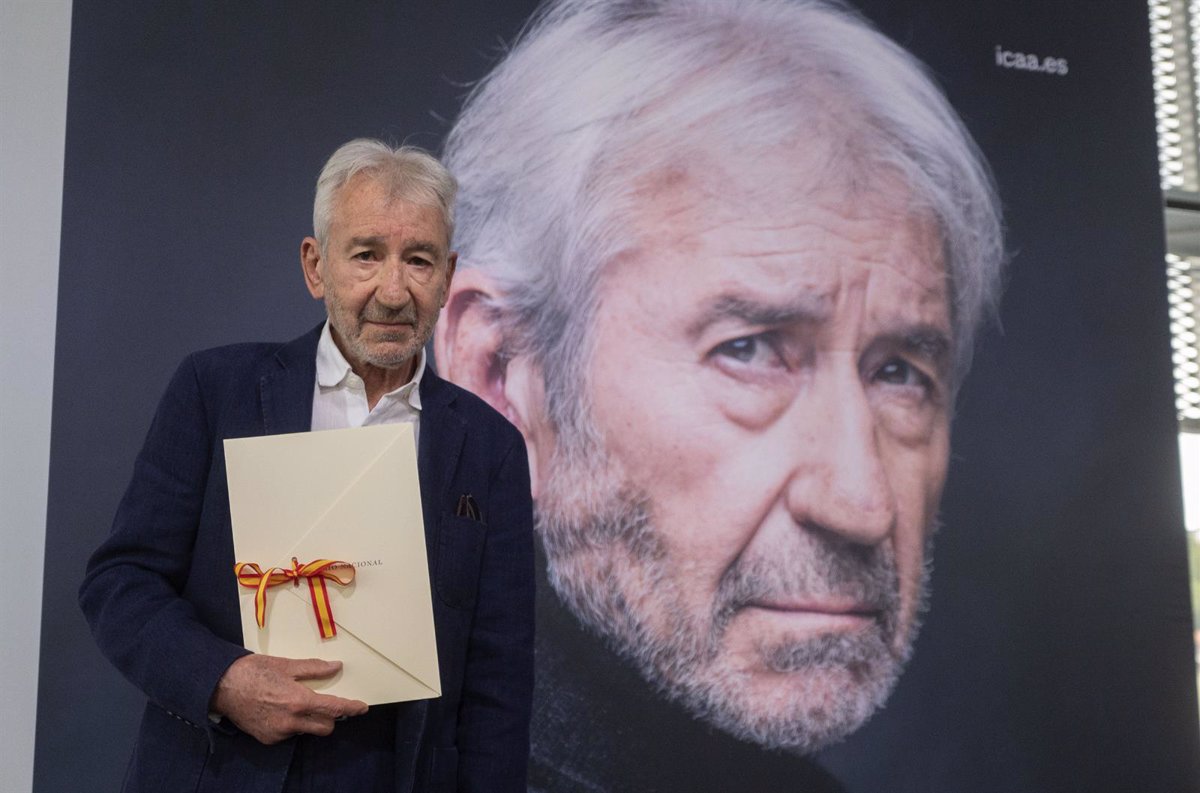 The actor José Sacristán has received this Monday from the hands of the Minister of Culture and Sports, Miquel Iceta, the 2021 National Film Award, within the framework of the San Sebastián International Film Festival. The Madrid artist has shown his gratitude to all those who have “accompanied him on the way”, especially his children and his wife, and has remembered when as a child he played with his grandmother with “chicken feathers” and, after 60 years By profession “without stopping playing”, you can still say: “they have believed it.”

The award, granted by the Institute of Cinematography and Audiovisual Arts (ICAA), a body attached to the Ministry of Culture and Sports, is endowed with 30,000 euros.

At the event, held in Tabakalera, in addition to Minister Iceta, other authorities were present, such as the Basque Councilor for Culture and Language Policy, Bingen Zupiria, the Government Delegate in the Basque Country, Denis Itxaso, and the Mayor of San Sebastián, Eneko Goia, as well as prominent representatives of the film industry and colleagues such as directors Pedro Olea and Mariano Barroso, the latter also president of the Film Academy.

Iceta, who began his speech with “words of affection” for the citizens of La Palma affected by the volcanic eruption, congratulated Sacristán for this award and reviewed his extensive career, while also taking the opportunity to also pay tribute to the Spanish “comedians”.

“The deep respect for your profession and the unwavering ethics that your career represents have made you a mirror in which we would like to reflect ourselves as a society, and also a human and professional example for all of us, especially for the younger generations” , has underlined.

After highlighting that José Sacristán has “shone with his own light” at the time of the so.called “Landismo” and that he has been José Luis Garci’s “fetish actor”, Iceta has assured that this Award is a “reparative act” that “has been pending since a long time ago”.

In addition, he has referred to his leading role in Pedro Olea’s ‘A Man Called Flower of Autumn’, a film “a forerunner of sexual freedoms that I personally appreciate and acknowledge.”

On the doors of the celebration, for the first time, of the Day of Spanish Cinema on October 6, the Minister of Culture has highlighted that the delivery of this National Award takes place at the moment in which the centenary of Luis García Berlanga is celebrated and Fernando Fernán Gómez.

“Two major figures of Spanish and European cinematography of the second half of the 20th century, who were also closely linked to the career of Pepe Sacristán. They, you, understood like no one the importance of this great family of actors and actresses of our cinema and our theater “, he expressed, to show his gratitude to the” dedication and scenic and vital teaching “of the Madrid actor.

Finally, he also had words of memory for the filmmaker Mario Camus, who died last Saturday, to whom Sacristán has dedicated the award.

In his speech of thanks, José Sacristán recalled that as a child he “tied a few chicken feathers to his head” and “stood defiantly” in front of his grandmother. “Holy Virgin, an Indian! She shouted. She believed it, I said,” she recounted.

“I have come this far by walking, learning as I go, working, investigating, browsing, looking, with as much certainty as concern and with as much courage as fear,” he stated, to recall that he has also dedicated a large part of his career “Not to unravel the complexity of the characters but to see how the hell you made ends meet and you could pay the rent.”

Sacristán has assured that every time he gets on stage or stands in front of a camera he feels “the feathers of the hen tied to my head and the enthusiasm, the amazement that the deep seriousness of the game produces and, then, the impossible, it is”.

Finally, he expressed his gratitude to “all those who have lent a hand along the way, have served as guidance, thanks for the help and advice”, to his children, to whom he has apologized for the time that the filmmaker has been able to steal the father “and his wife Amparo” for his affection, his love. ” “Thank you for always being there, I do my best to be there too,” he assured, ending his speech by quoting Cervantes.

The actress Aitana Sánchez.Gijón, who has been in charge of introducing the Award, has wondered “how is it possible” that José Sacristán “has not had this Award for years” and has highlighted that each of his films is “a reflection of the history of this country “. “It is the living history of our cinema and our theater,” he emphasized.

He has also underlined his “ideological commitment, standing up in defense of tolerance and dignity” along with other colleagues among whom he has cited Pilar Bardem, and has defined him as a “wise man” whom he considers “of the family “.

The jury of the 2021 National Film Award, meeting on July 2, unanimously awarded the award to José Sacristán “for representing the living history of Spanish cinema of the last sixty years and for having embodied the contradictions, vicissitudes and idiosyncrasy of a society in transformation “.

He also stressed that “he has worked with some of the most relevant filmmakers, including Luis García Berlanga and Fernando Fernán Gómez, whose centenary we celebrate this year, and with active filmmakers such as Carlos Vermut, Isaki Lacuesta or Javier Rebollo, connecting with different generations and sensitivities “.