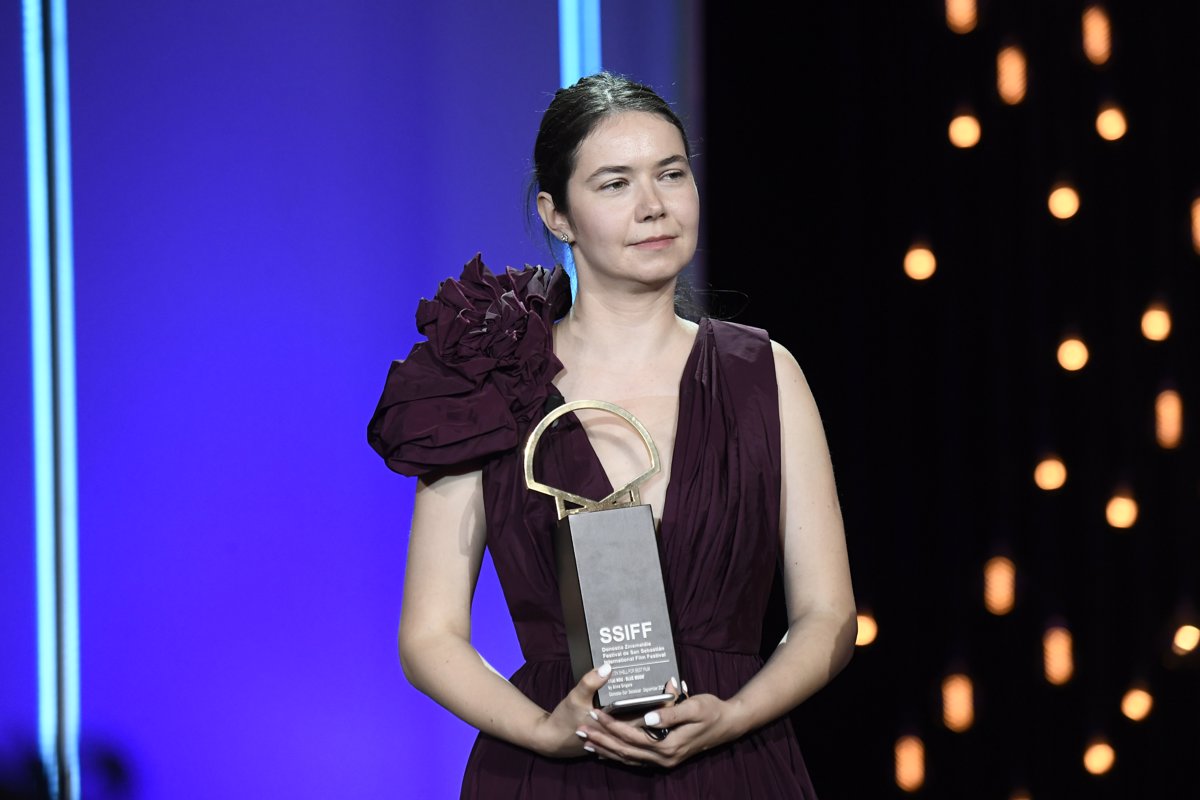 At the closing gala of the Zinemaldia, presented by Edurne Ormazabal and the actor Alberto San Juan. After reading the record, director Luis Monzón presented, before its screening, ‘The laws of the border’ together with the film’s team. The film is an adaptation of the homonymous novel by Javier Cercas.

Romanian filmmaker Alina Grigore has won the Golden Shell for her film ‘Blue Moon’,. The director stated that “this award is a tribute to artists who want to speak and express female creativity and creativity in general”.

The Special Jury Prize went to Lucile Hadzihalilovic for ‘Erwing’. The filmmaker thanked the Jury “for having rewarded a silent, dark, long film and also, without a script”.

The Silver Shell for Best Direction went to Tea Linderburgh for ‘Du som er i himlen / As in Heaven’. The director has acknowledged that “she had never won anything” in her life and this award is for her “crazy, wonderful.”

The Silver Shell for the best lead performance, for the first time without gender distinction, has been ‘ex aequo’ for Flora Ofelia Hofman Lindhal for ‘Du som er i himlen / As in heaven’ and AS Jessica Chastain for ‘Los ojos de Tammy Faye / The eyes of Tammy Faye ‘. Both have entered the stage hand in hand to collect this recognition. Hofman has confessed that “it is as if he was dreaming” and has thanked his family and the director of ‘As in heaven’ Tea Lindeburg, for “believing” in her.

For her part, Chastain has trusted that “Tammy Faye’s love reminds us that we have to go beyond appearances, beyond masks, and recognize the woman behind it” and thanked us in Basque for the award .

The Jury Prize for Best Screenplay went to Terence Davis for ‘Benediction’, while the Silver Shell for best supporting performance went to the cast of ‘Quien lo imide’ by Jonás Trueba.

Candela Recio, representing more than 200 young people who act in the film, stated that “with this award we feel that the things we are saying are being heard”.

The Jury Prize for Best Photography went to Claire Mathon for ‘Enquête sur un Scandale d’état / Undercover’ by Thierry de Peretti. The award was collected by the filmmaker who said “it is the third time” that he has had “the fortune to collaborate with Claire Mathon, one of the most important artists in French cinema” and this film “owes him a lot”.

The Kutxabank.New Directors Award went to the Russian Lena Lanskih for ‘Nich’ya / Unwanted’, while ‘Carajita’ by Silvina Schnicer and Ulises Porra has received a special mention. Lanskih has affirmed that this award.winning “is a great inspiration and a motivation to continue shooting, writing and creating”.

The Zabaltegi.Tabakalera Prize was won by ‘Vortex’ by Gaspar Noé, who pointed out that “life is a joke” but wanted to “make a serious one after several funny films” and is “very happy” that he has received this award.

The Orona.Nest Prize went to the Croatian short film ‘U sumi / In the Woods’ by Sara Grguric. The Irizar Prize for Basque Cinema has been won by ‘Maixabel’ by Iciar Bollaín. The award was collected by the producer Koldo Zuazua, who gave thanks for this “unforgettable moment” and dedicated the award to those who started the restorative meetings on the ‘Vía Nanclares’, which were “a commitment to coexistence”.

The City of Donostia / San Sebastián Audience Award for the best European film has gone to Emmanuel Carrére’s ‘En un dock in Normandy’, the singer Daniel Bajo from Karma Films has collected the award from the hands of the singer from Vetusta Morla, Juan Pedro Martín ‘Pucho’. The Audience Award for Best Film went to ‘Petite maman’ by Céline Sciamma.

The Horizontes Latinos, RTVE – Otra Mirada awards and the Spanish Agency for Development Cooperation Award have been for ‘Noche de fuego’, by Tatiana Huezo on femicides in Mexico from the gaze of a girl. Huezo, very moved, pointed out that the film is “a testimony of what is happening in many places in Mexico” and has dedicated the award “to all mothers who raise their daughters alone and sow seeds of hope, freedom and equality”.