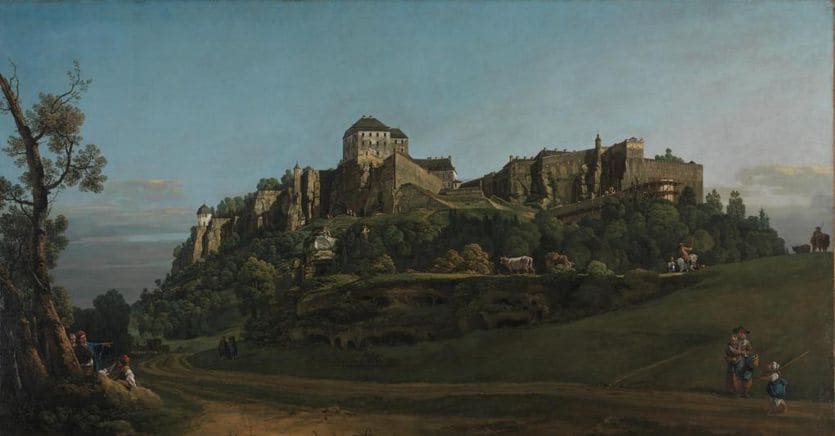 No painter more than Bernardo Bellotto embodies the Latin motto “no prophet in your country“. Almost unknown in Italy, the Venetian artist built a fortune and fame as a “painter of views” abroad, in Germany. Too hastily dismissed as an epigone of Canaletto, Bellotto pays the fame of a modest script in the wake of the most famous and first “painter of views”. Moreover, Giovanni Antonio Canal he was Bellotto’s uncle, on whom the brand of nepotism has always weighed. But Bellotto’s degree of realistic painting is perhaps even higher, in terms of precision and light control, than that of his most famous ancestor.

Both used the method of Camera Obscura, a sort of primordial photographic camera, with which they were able to paint landscapes and landscapes that look like photographs so much they are close to reality. But it is easy to create a masterpiece when painting the Bucintoro on the Grand Canal at the Feast of the Redeemer o Piazza San Marco: the raw material is already so extraordinary. Much more difficult is to make an anonymous Saxon castle into a sublime work of art.

At the court of King Federico

The castle in question is called Konigstein (literally, the “king’s stone”) and stands on a rocky spur where the Elbe river, near DRESDEN, in Germany, it makes a loop. In the 1700s he lives there Frederick Augustus II of Saxony, King of Poland and one of the great electors of the Prussian crown, and also ancestor of the future English dynastic line: the Windsor are an artificial name, created during the WWI. The actual royal house is there Saxe Coburg and Gotha which started with Alberto, the prince consort of the Queen Victoria (which was a Hannover instead).

The year is 1756 and a 36.year.old Bellotto arrives at the top, which is somewhat reminiscent of the fortress of Gradara in Italy, with a particular task: to paint five paintings that all portray the same subject, the castle of the King. he was distinguished for views of various European cities, arrives in Konigstein as a superstar: he is the highest paid painter of the court.

The king’s money, however, will be well spent: the five gigantic canvases, which makes Bellotto’s surprising precision stand out even more, are absolute masterpieces of perspective. The fortress and the castle are depicted from different angles, far or near. Commissioned to be a kind of unique work, the paintings were never exhibited together, not even during the painter’s lifetime. There Seven Years’ War between France and Great Britain, which broke out in 1756, dispersed the works and some were already on their way to England. In 2021, for the first time in 250 years, the four views of the castle are brought together, as they should have been from the beginning, for the first time at National Gallery from London. The museum idea, the mini.exhibition, is the most recent tribute to Gabriele Finaldi, the 56.year.old Italian.Londoner at the head of the gallery, to Italian painting. The event on Bellotto is hosted in a single room, with the 5 paintings. Perhaps this will be the future of exhibitions in the post.Covid world: this one in particular, curated by Letizia Treves, is a sort of monograph, an in.depth study on a single theme by a single author.