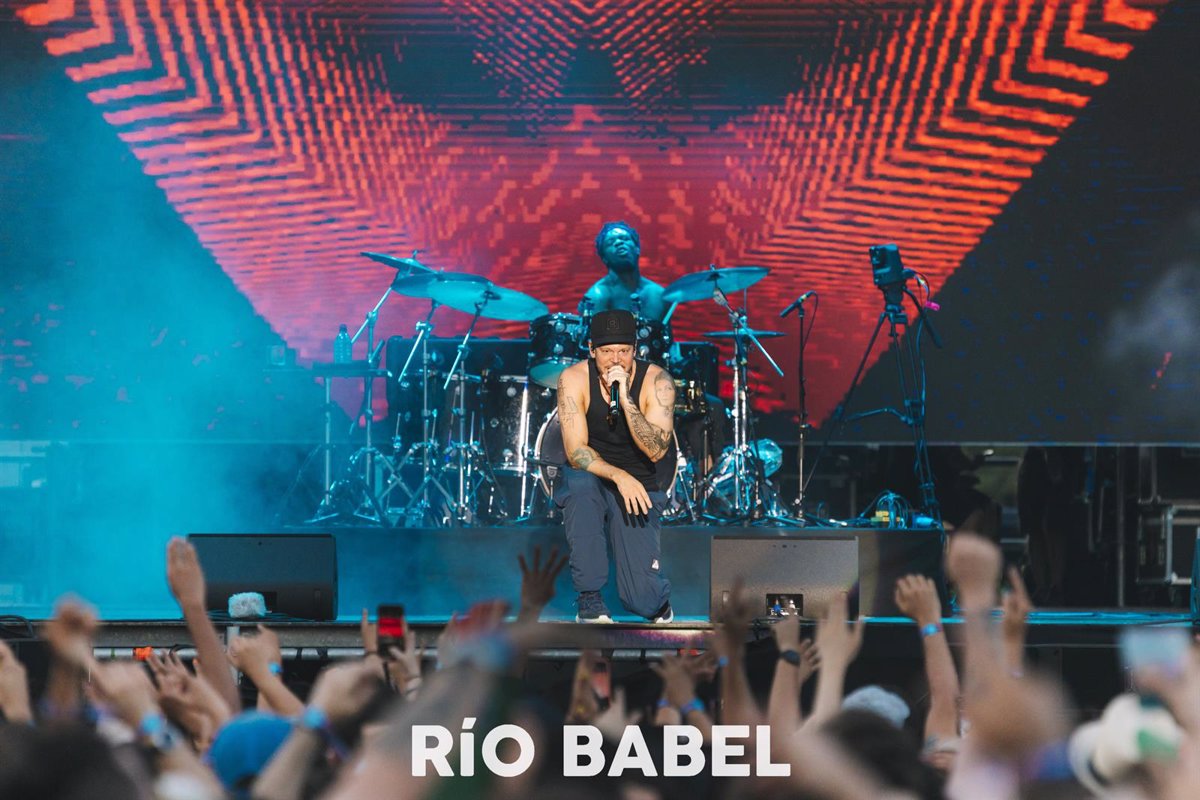 The fourth edition of the festival comes to an end which, in its three days of celebration, has brought together almost 62,000 people

Residente wanted everyone to have a “bastard” on the last day of the Babel River Festival. And for this he put all his strength this Saturday on the main stage of the event, achieving an audience devoted to his rhymes, Latin rhythm and political and social discourse. Latin America then starred in the party at the Caja Mágica in Madrid.

Some 17,000 people, according to the organization, enjoyed the Puerto Rican concert on the third and last day of the fourth edition of the festival, which once again stood out for its good management of tickets and bars after the collapse on Friday due to the crowd of attendees.

This Saturday, Ciudad Jara and Muerdo opened around 5:00 p.m. the nine hours of music that they provided at the event, accompanied by high temperatures. They did it before a small number of attendees, since the bulk began to arrive at the place around 7:00 p.m., for rapper Rayden’s turn.

With his hymns from years ago, such as ‘Matemática de la carne’, and his new songs, such as the Eurovision song ‘A la calle de la llorería’, the artist from Madrid and his musicians made a good number of followers sing. His partying, close and energetic formula is a winning bet.

The afternoon continued with a mix of reggae, dub, jazz, soul and even techno by New Zealanders Fat Freddy’s Drop, who brought together hundreds of people on the middle stage of the festival. Their applauded rhythms were the perfect precedent for what was to come.

At 9:15 p.m., Residente arrived to party and have fun. With the sun setting in the background, René Perez opened his show with one of his latest hits, session 49 of Bizarrap. He started strong and sincere, declaring intentions.

I continue in style with ‘Atrévete’, a song of songs by the group with which he reached the whole world, Calle 13, which he led until he decided to go solo. The audience caught fire and shook off the sweat, as this song says, and gave themselves totally.

“We’re going to have a great time because that’s what living is all about,” he encouraged the attendees, to continue with both solo and group songs. That’s how ‘La cumbia de los borados’, ‘El baile de los Pobres’ or ‘El aguante’ sounded, elevated by the forcefulness of the Puerto Rican rap and a tremendous choral support.

CONDEMNATION OF SUFFERING AT THE BORDERS

By introducing ‘Pa’l norte’, he took the opportunity to defend migration and condemn the situations suffered at the borders, an important allegation that inevitably brought to the minds of the Spanish public the recent death of twenty people in the jump to the Melilla fence.

“I put myself in the place of the parents of the people who have been killed on the border and I don’t know what I would do with my life. We have to put ourselves in the place of each one of them and go out and demonstrate when these things happen,” he called out to his audience to cheers and applause.

After that, I continue with ‘Fiesta de locos’, ‘Death in Hawaii’ or ‘Around the world’. With his rhymes, Pérez knows how to lead the public from baile to vindication and emotion, as he also did with ‘Latinoamérica’ and ‘This is not America’, songs with which he tells the story and denounces the miseries of Latin America, a region very present in the Babel River as could be seen by the multitude of flags of their countries.

With the tropical rhythm of ‘Vamo’ to behave badly’, the winner of numerous Latin Grammys said goodbye to the stage, leaving the audience wanting more. “René, René, René” many of them shouted because they expected him to perform ‘René’, one of his most applauded last compositions.

When the end became clear, the audience rushed to the middle stage to enjoy the German band Querbeat, whose musicians put on quite a party, even plunging into a delighted crowd that clapped, jumped and screamed alongside them.

MOLOTOV AND ZOO IN THE CLOSING

Rock took over the festival with the Mexicans Molotov, who already turned the main stage upside down at midnight. Between pogos and in continuous movement, the attendees sang the successes of the group, many for its almost 30 years of experience. The band created a “good fucking vibe” with songs like ‘Mátate Teté’ and closed their concert with the controversial ‘Puto’.

Already at the end of the day, rap, rock and ska resounded with the Valencians Zoo, surprised before a large audience, although not as much as the heads of the day. However, for them it was more than a triumph, because those who lasted until their turn knew what they were going for: dance, jumps and continuous improvised pogos. Thus, Madrid sang ‘Correfoc’, ‘Llespolies’, ‘Sereno’ or ‘Estiu’.

At the end of the festival, ‘Tobogan’ was played, unleashing even more madness among the Valencian public, who were grateful that the festivals bet on groups like theirs or that of the Galician Tanxugueiras, and pointed out their next objective: they want to fill the Wizink Center in December.

Thus ended the fourth edition of Río Babel, which, in its three days of celebration, has managed to gather almost 62,000 people, far exceeding the figures of previous editions and ratifying its importance in the city. Beyond music, its stage dedicated to humor, Babel Comedy, has also been successful, which was performed this Saturday by Galder Varas, Daniel Pistola, Lalachus, Valeria Ros, Yuñez Chaib, Carmen Romero and Nacho García.