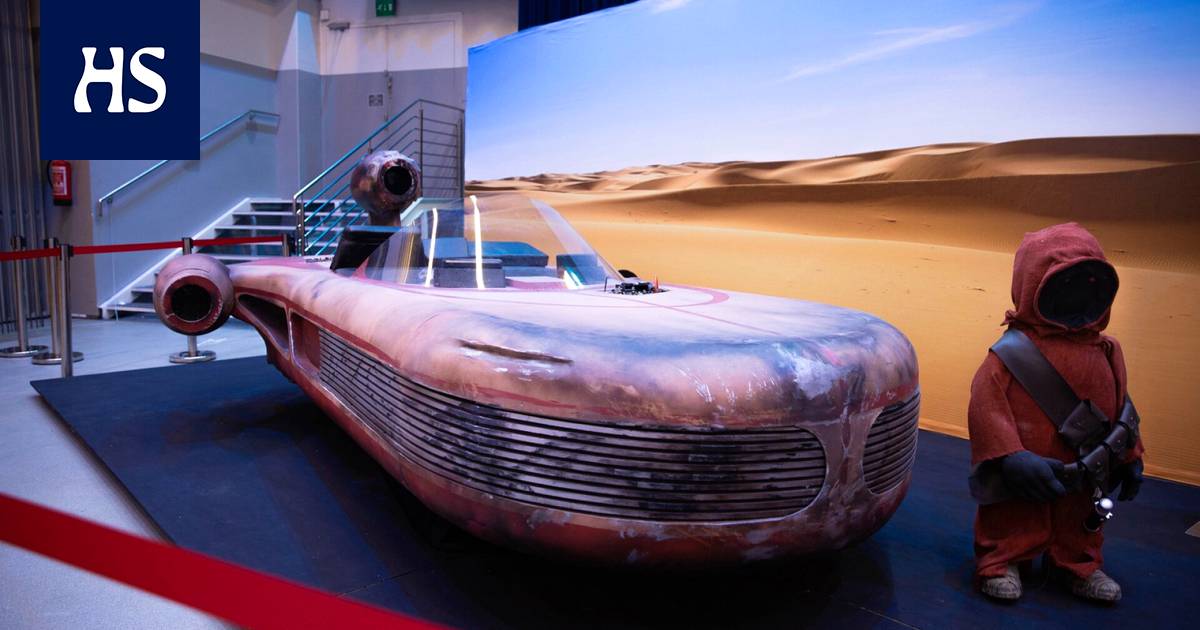 In July, Tampere-talo is a Star Wars fan’s paradise. The rare collection of a mysterious British fan got stuck in customs for a while, but finally made it there.

Se looks like an Ikea piece of furniture that fell off a moving truck, but is Anakin Skywalker’s desk from 1999 A dark threat from the movie. The value of the table and chair is said to be around 100,000 euros.

A couple of steps away is a replica of the iconic go-to game, Luke Skywalker’s desert glider seen in the first Star Wars movie, made by the engineers of Norank Engineering. Actor Mark Hamill whizzed by on a desert kite in the mid-1970s on the set in Tunisia.

More props in Hamill’s hands have been stored in the display case. Luke Skywalker’s lightsaber handle looks a little tamer there than it does on the big screen with special effects. The lightsaber is also a copy of the original made by engineers.

These and about 120 other objects make up the Unofficial Galaxies exhibition opening on Friday in Tampere-talo.

The picture shows a Master Replica copy of Luke Skywalker’s lightsaber from the movie The Last Jedi from 2017. When Aamulehti visited the exhibition, the lightsaber signs were still facing the wrong way. Picture: Maaria Koskelo / Morning newspaper

From one an exhibition built from the world’s largest private Star Wars collections.

At issue In the Sorsapuisto hall of the Tampere building 1.–31. July. The collection has previously only been exhibited in one exhibition, in Liverpool between 2017 and 2019.

Tampere house has built the exhibition together with the British World Touring Exhibitions. Disney and Lucasfilms are not involved in the show.

Star Wars (Star Wars) is the world’s most famous film series and a legend of popular culture. The original trilogy was published between 1977 and 1983. It has been followed by a huge number of different add-ons and sequels as well as other adaptations.

Canonici, a longtime Star Wars fan, is very excited. He and the rest of the production team have a collection in their hands, which would be quite an inspiring task for quite a few others to organize into an exhibition.

Corrado Canonici doesn’t want to name his favorite movie, but he says what he especially likes about Star Wars: “Especially the original trilogy has a great hidden philosophy. It’s not just a space story.” Picture: Maaria Koskelo / Morning newspaper

The name of the owner of the collection is not public information. Tampere-talo communications specialist Elsa Vähänen tells what he knows: he is a wealthy, well-known person in Britain who started collecting toys as a child.

At the entrance to the exhibition, there is an anonymous greeting from the Collector, in which he talks about his first exposure to Star Wars in 1978: “When I stepped out of the theater, my mother said that that movie was more than just space. And he was right.”

Sips of salt there was still a large construction site on Thursday morning, a day before opening to the general public. Last week, something happened to the exhibits that you couldn’t imagine happening to, say, Han Solo – they got stuck in customs.

Elsa Vähänen smiles that the work group from Britain got to experience an unhurried Finnish midsummer when there was nothing to build on the weekend. We only started building on Tuesday.

The exhibition was still being built at high speed on Thursday. Picture: Maaria Koskelo / Morning newspaper

The costumes seen in the exhibition are spectacular, but not original. Picture: Maaria Koskelo / Morning newspaper

Even though the exhibition was not quite in its full splendor yet, for example, the few light experiments carried out during the tour gave an indication of the close-atmospheric final result. Familiar from the movies by John Williams however, due to copyright reasons, the compositions will not be heard.

Williams’ lack of music is compensated for by the fact that Imperial March starts ringing in my head as a reflex when reaching the back wall of the hall. It would be fun to hum too. The reason is clear: Darth Vader, over two meters tall, stands here.

The exhibit includes life-size figures of many key Star Wars characters. Their outfits are not the ones used in the filming, but so-called master replicas.

Yoda has his place in the show. Picture: Maaria Koskelo / Morning newspaper

The exhibition’s toy collection is from 1977–1999, but the rest of the objects also have touches of the 21st century. A Yoda-like character called Grogu appears in Disney’s The Mandalorian series, which started in 2019. Picture: Maaria Koskelo / Morning newspaper

Corrado Canonici believes that the exhibition will be rewarding for both “ordinary” Star Wars fans and die-hard fans.

“Even if you don’t know everything about Star Wars, it can be great to see and recognize these objects that you know are famous and part of something legendary,” says Canonici.

He then gestured towards Anakin’s desk and Luke’s desert glider.

“For hardcore fans, it can be a mind-blowing feeling to see these objects and realize that oh my god, these were really in the movies.

Manuscript signed by David Prowse. Prowse was the bodybuilder who played Darth Vader in the original trilogy. However, he was only able to portray Vader’s physical presence inside the suit. Vader was voiced by James Earl Jones, and when the character’s face was revealed in Return of the Jedi, it was Sebastian Shaw inside the suit. Picture: Maaria Koskelo / Morning newspaper

Correction July 5, 2022 at 8:05 p.m.: The story previously incorrectly stated that Luke Skywalker’s lightsaber displayed in the exhibition was in the Return of the Jedi movie. In fact, the lightsaber on display was made after the fact. Also, the desert kite in the exhibition has not been used on the big screen, but the object has been built afterwards.

In addition, there was an error in the caption of the story. The signs for the lightsabers were left facing the wrong way in the exhibition, so on the left side of the picture is a copy of the lightsaber that was seen in the movie Return of the Jedi. The one on the right is a replica of the lightsaber from The Last Jedi.